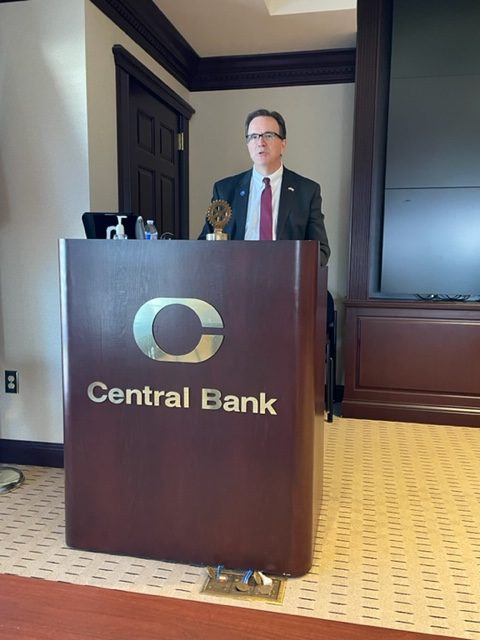 State Auditor Mike Harmon gives a speech Monday to the Nicholasville Rotary Club. “I always tell everybody, our motto is ‘follow the data,’” he said. “We don’t target anyone. We don’t give anybody a pass, we just simply follow the data.” (Photo by Miles Layton)

NICHOLASVILLE — During the COVID pandemic, the Kentucky auditor’s office has been dealing with a large number of unemployment fraud cases.

Mike Harmon, Kentucky auditor of public accounts, gave an overview of his office Monday during a meeting of the Rotary Club of Nicholasville at Central Bank.

His office recently released the first part of its statewide single audit of Kentucky. Volume two is usually released in April, but Harmon said that volume will be released at a later date.

“Volume one deals specifically with the finances — the state’s financial statement and controls. Volume two deals with federal compliance,” he said.

“I’m sure it was very well intended, but what happened was … just like sometimes we have the best of intentions, but bad results. Whenever you take key controls off, the opportunity of fraud goes up substantially,” Harmon said. “So last year when we saw, when they did the auto-pay, there was about $655 million paid out during a timeframe when there was the possibility of fraud. Now, not all $655 million of that was fraudulent, but certainly there was an opportunity for fraud.”

Harmon said the auditor’s office still saw some similar fraud but the number of instances seems to have gone down when compared to the previous year.

“They tried to put in place some items to help prevent fraud, but sadly a lot of them were not sufficient,” he said. “For instance, we looked at 54 claimants that had listed their employment as either the labor cabinet or the Commonwealth of Kentucky. There was well over about $333,000 paid out to those 54. So our auditors took a sampling of 13 of those 54 and all 13 were fraudulent. Primarily because they didn’t actually work there. So if they were fraudulent and if those claims that we looked at were over $20,000 paid out to those 13 claims.
“If you think about that on a larger scale, there had to be massive fraud still.”

During the pandemic, the unemployment system got overwhelmed, but has been improving its computer systems and taking other measures, Harmon said.

“There’s just still a lot of work to do to get ahead of it,” he said. “So hopefully they can get that resolved. We’re pulling for them.”

Harmon also noted that at the end of the past fiscal year, June 30, 2021, there were still 120,000 unresolved unemployment claims.

“We’re still in the process of resolving,” he said. “That in and of itself is also concerning.”

Prior to being elected auditor, Harmon served in the general assembly for 13 years. He said his office works very closely with the General Assembly to advance legislation that helps the state government become more efficient, effective and ethical.

“When I first came in, about two-thirds of our budget came from invoicing; only about a third of it came from the general assembly appropriation. So because we realize that it is like anything else, it’s getting more and more expensive,” he said. “We always look for ways to try to help our counties save money.”

During his talk, Harmon highlighted a case that his office brought to light.

According to the Hogans’ plea agreements, the Hogans conspired with each other to commit wire fraud by issuing checks from a second delinquent tax account for the Lawrence County Attorney’s Office, the statements for which went to their personal residence.

Michael Hogan and Joy Hogan would routinely prepare “bonus” checks issued to Joy, and signed by Michael, paid with delinquent tax funds that should have been used on operating expenses for the Lawrence County Attorney’s Office.

The Hogans deposited these checks in Joy’s personal account and the couple’s joint accounts and spent the funds on personal expenses. Michael Hogan admitted he personally benefited from these payments and knew some of these payments were not reasonable in amount, nor beneficial to the public.

Additionally, Michael Hogan also admitted to defrauding the Lawrence County Child Support Enforcement Office, part of the Kentucky Cabinet for Health and Family Services.  According to the plea agreement, Hogan billed the program for more hours than he actually worked.As part of the plea agreement, Michael Hogan agreed to resign as the Lawrence County Attorney.

The Hogans were indicted on the charges in June 2021. The auditor’s office is the reporting agency, Harmon said. It finds the data, confirms it and then reports it to the proper agency.

“I always tell everybody, our motto is ‘Follow the data,’” Harmon said. “We don’t target anyone. We don’t give anybody a pass, we just simply follow the data.”