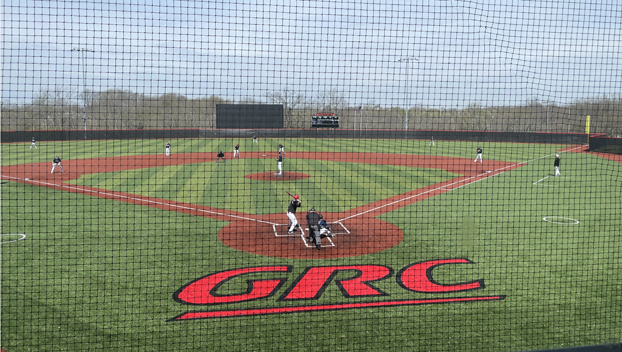 George Rogers Clark was unable to overcome an early 3-0 deficit after two innings, and the Hazard Bulldogs (8-3) escaped Winchester with a 5-2 victory.

Looking to improve upon their 2-5 start to the season prior to Saturday’s game against the Hazard Bulldogs, the Cards sought to get momentum in their favor.

Unfortunately, the Bulldogs were able to jump out in front.

George Rogers Clark was unable to overcome an early 3-0 deficit after two innings, and the Bulldogs (8-3) escaped Winchester with a 5-2 victory.

Facing a Bulldogs team that came in with some momentum after four consecutive victories, the Cards trailed 1-0 following a sacrifice fly by Hazard’s Hank Pelfrey in the first inning.

After the Cards went down in order in the bottom half of the inning, a two-out rally by the Bulldogs in the 2nd inning led to two runs being brought home on an RBi double by Hazard’s Gaige Logan.

From there, Bulldogs’ pitcher Sawyer Patrick was able to maintain some control, pitching a 1-hit shutout throughout the first 5 innings.

A single by Carter Maynard in the third inning represented the lone base runner for the Cards with the exception of Brady Davis, who was put on base following a hit-by-pitch.

“He’s a very good pitcher,” Varney said. “He keeps the ball low, keeps it in the zone, throws strikes, [and] makes you put it in play. If you don’t have a lot of hard contact and hit soft fly balls, it’s easy outs and easy catches.”

Pitching five innings for the Cards, Zach Brookshire finished with four strikeouts. Following 48 pitches over the first two innings, he was able to get through the next three throwing just 53.

“Zach’s going to give you everything he’s got every time he’s out there,” Varney said. “He’s not going to get too high or too low. He’s going to stay even keel.”

After the Bulldogs scored twice more, the Cards had their biggest offensive rally of the game in the 6th inning. A one out, two-run double by catcher Nick Huff brought home both Maynard and Kamden McAlpin, who had each reached base on an infield and bunt single.

Although a leadoff seventh inning double by Jake Sears threatened to spoil the excitement for the Bulldogs, Hazard was able to get the next three outs for the victory.

“[I’m] glad to see Nick get a hard hit, line drive there. We’ve just got to string some more hits together as far as a team. Get some more guys on base, and then do that, and keep doing it,” Varney said.

Following a 5-3 loss later in the day to Western Hills, the Cards’ record currently stands at 2-7.

With a Monday matchup in Winchester against Bourbon County (4-3), the Cards will look forward to the start of 40th District play.

“We’ve just got to stay the course,” Varney said.