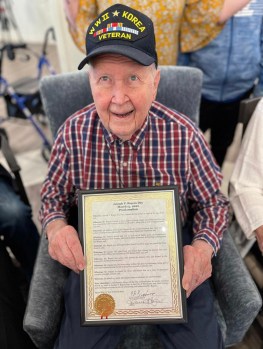 Editor’s Note: Inspired by a similar series of stories that appear in the New York Times, the Sun is beginning a “Humans of Winchester” series that focuses on biographical stories about people in our community. First person the Sun features is Joseph Rupsis, who recently turned 100-years-old. Seeking to know more about Rupsis’ century of living with memories that stretch back to the Wall Street Stock Market crash, he shared his diary with the newspaper.

Albert Rupsis was born March 11, 1916. His brother Joseph was born March 15, 1922 with younger brother Stanley born on December 24, 1930.
We lived in a 3-story brick building at 552 Jacob Street in Troy, NY. An alley ran north and south along the west side of our home. Our mother and father owned the building.

I entered the kindergarten class of St. Peter’s School when I was 5-years-old. The school was within walking distance of our home. Albert was in the sixth grade of that school when I entered kindergarten.

Albert became acquainted with some of the kids his age at the school. A few of them lived on Hutton Street, one block north of Jacob Street. Albert visited his new found friends often. I, Joseph, didn’t like being left alone.

One day when Albert was leaving home to visit his friends, I told him I was going with him. He shouted, “No!”

He repeated, “No!” Then he ran up the alley.

I ran after him. Albert glanced back at me and noticed I was a surprisingly fast runner. He stopped and bent over and picked up a few stones from the ground. Then he threw them at me. A few close misses convinced me to stop following him. I returned to Jacob Street to find another way to entertain myself.

Albert graduated from the eighth grade in the year 1929. I had advanced to the second grade at school.
Suddenly, as if over night, the Wall Street Stock Market crashed! Factories closed. Businesses went bankrupt. Banks closed. Millions of people lost jobs.

Soon we were broke. We couldn’t make our house payments. The loan company foreclosed. We lost our home.

We moved into a little cracker-barrel of a home. Rent there was $10 a month. That was all we could afford to pay. Stanley was born in 1930. Our father couldn’t find a job.

My mother got a job in a shirt factory ironing shirts. The pay was small. Relatives in Connecticut offered to help us.

To ease our burden, father took Albert to Connecticut with him. He found a job there.

When winter arrived, Stanley got sick. The doctor told us Stanley had double pneumonia. I quickly wrote a letter and sent it by special delivery to our father in Connecticut. I told him the doctor said Stanley was dying. My father returned to Troy. He left Albert in Connecticut because Albert had gotten a good job there and he wanted to stay there.

Stanley overcame his illness and got better. President Roosevelt started the WPA and our father got a job there. Our bills got paid and life got better for us.

I finished grade school and graduated from high school in 1940. Germany was waging war in Europe.