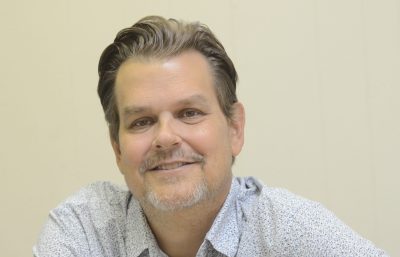 “Todd was a unique person and had a caring spirit about him.” — Mayor Ed Burtner

The long-time director of the Winchester-Clark County Industrial Authority has died.

Todd Denham passed away Monday at his home in Winchester at the age of 52 due to complications from cancer.

The executive director of the Winchester-Clark County Tourism Commission, Nancy Turner, has fond memories of working with Denham for close to two decades.

“I had the honor and pleasure of working with Todd for 18 years. Throughout those years, his energy and passion for this community have been a joy to watch.”

Turner called Denham “the heart of our family” at the economic development office and said he “will fondly be remembered.”

Denham played a vital part in bringing a new vision to downtown Winchester.

Ron Tierney, chairman of the Winchester/Clark County Industrial Park, remembers Denham for his tireless efforts to bring industry to the area.
“He was always a hard worker, had the community in mind, and did the best he could to bring industrial prospects to the area and see to it that they continued to be taken care of,” he said.

Tierney will also remember Denham as a quality human being.

“He was a very good individual and a very honest man,” he said.

Winchester Mayor Ed Burtner said that the area would miss the wealth of knowledge that Denham offered.

“Todd was a unique person and had a caring spirit about him,” he said. “His knowledge and his expertise; his institutional knowledge about projects and how they came about, and his contact with the state — you have to have those contacts in order to be able to do well as far as economic development is concerned.”

Denham was diagnosed with prostate cancer several years ago and detailed his battle with the disease in an article published by the Sun in 2020.
“I try to share my experience and be positive and upbeat,” Denham said. “I think I’ve had a pretty good attitude through all this.”

In the same article, Denham said there is a large community of prostate cancer survivors in the area and encouraged other men diagnosed with the disease to reach out if they need someone to talk to about their struggle.

Denham was a native of Stanford, Kentucky, and a graduate of Eastern Kentucky University. He worked in economic development and chamber of commerce positions all over the state from small towns like Irvine to its biggest city, Louisville.

Visitation is scheduled from 4-7 p.m. Monday, April 11 at First Christian Church in Winchester. The funeral is scheduled for 2 p.m. the next day at the church.