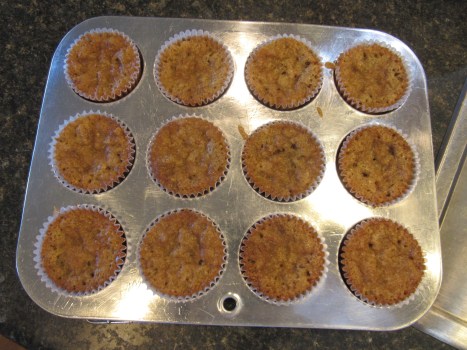 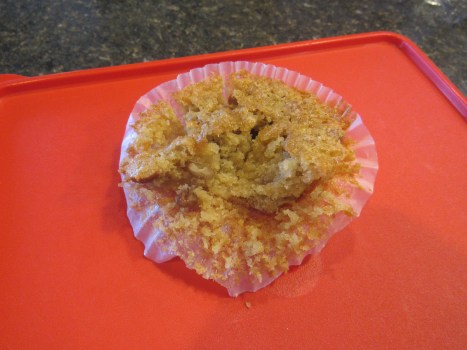 A while back Brad and I were having supper at Loma’s restaurant when I looked across the room and spotted my cousin Teri and her husband Steve. Before they left the restaurant, Steve came over and told me about a great recipe he’d been given called pecan pie muffins. He raved about the muffins and said he’d get me the recipe so I could try them.

Steve got the recipe from a friend who’d gotten it from a friend. Steve said the muffins were some of the best he’d had and he just knew I’d like them.

Once I got a copy of the recipe, I stored it among the all the other’s I’ve saved over the years and after a few weeks I decided to give it a try. I just about always have our pantry and refrigerator stocked with the basic items you need for baking, just in case I get a craving for something sweet – which is almost all the time since sweets are my downfall.

The recipe sounded simple enough. I didn’t have foil muffin cups but I did have paper ones and I lined a twelve-cup muffin pan with nine paper liners.

I combined the pecans, brown sugar, and flour in a large bowl and made a well in the center of the dry ingredients and set the bowl aside. I cracked two eggs into a small bowl and used a hand held mixer, beating the eggs until they were foamy. Once foamy I added the melted butter and stirred the liquids with a spoon.

I poured the wet mixture into the well of dry ingredients and gently combined; then spooned the batter into the lined muffin tin. After filling the nine paper liners, I still had some batter in the bowl so I added two more liners to the pan and used up the remaining batter.

Into the preheated oven the pan went and I set the timer for 20 minutes. When the timer sounded I used a toothpick to test for doneness and ended up baking the muffins for five more minutes.

Out of the oven they came and after they cooled, Brad and I had to give them a try.

We both began trying to peel the paper off of the muffins and discovered the dough had stuck and we ended up needing a fork to scrape the muffin off of the paper liners. I told

Brad that the recipe had mentioned using foil liners and I guess I should have heeded those instructions. Since then I’ve been told that the secret to these muffins is the foil baking cups – so if you don’t have them, go buy them – don’t substitute the paper ones.

After taking a couple of bites I will say I agree wholeheartedly with Steve, these muffins are extremely good. They were so good in fact that I had to share. I took some to Steve and I took some to my mom and brother. Steve ate one as soon as I delivered them and said he really liked them and hopefully the other one would make it home to my cousin Teri. My mom and brother had the same thought that I did; they taste like pecan pie. Which by the way was one of my grandfather’s (my mom’s dad) specialty desserts – my Pa Floyd made the best pecan pie ever and I think he would have liked these too.

These muffins definitely fall into the Nailed It category and when I’ve got a craving for pecan pie and don’t want to go to that much trouble, these muffins will be my go-to. I also agree with the ladies that provided the recipe – nine is not enough.

• Preheat oven to 350 degrees. Place foil baking cups in muffin pan.
• Combine first three ingredients in a large bowl. Make a well in the center of the mixture.
• Beat eggs until foamy. Stir together eggs, butter and then add to the dry ingredients, stirring just until moistened then stir in pecans.
• Spoon batter into cups filling 2/3 full. Bake at 350 degrees for 20-25 minutes or until done.
• Remove from pan immediately and cool on wire rack.
• Can double recipe and it works great. 9 is never enough.