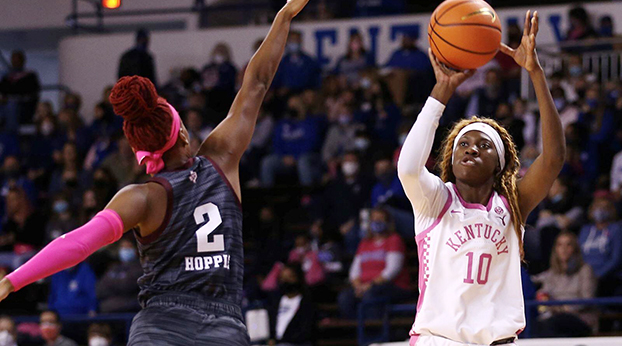 LEXINGTON, Ky. (KT) — Kentucky All-American Rhyne Howard was speechless after she was selected as the No. 1 pick in the WNBA Draft on Monday night.

“To go first, I don’t even have words for it right now,” she said. “I’m still kind of shaking. But it is super exciting, and I’m proud of what I’ve done, proud of myself, and thankful for everyone that’s been on this journey with me and that’s helped me to get here.”

The University of Kentucky senior became the first player in school history chosen as the No. 1 pick in the draft when the Atlanta Dream made the first pick to open the draft.

“Rhyne is a versatile wing who can score the ball in a variety of ways,” Atlanta General manager Dan Padover said. “Her athleticism and basketball IQ will be the backbone of her future success in this league. She’s a great kid from nearby and we think she will be a key piece for the future of this basketball team.”

Atlanta coach Tanisha Wright agreed and is looking forward to adding Howard to the team roster.

“Rhyne is a special talent with a multi-faceted skillset, she’s going to be a great addition to our team,” she said. “She has a quiet competitiveness that I love, and I think the level of play in our league will bring something special out of her which I’m really excited to see.”

Howard plans to carryover her competitive nature on to the next level.

“I just want to do that by my competitive spirit and the will to never give up and always fight and just maintain my composure and stay calm, cool, and collected,” she said. “I think that’s what really helped me to become successful and I just really want to have an impact on the team, like when I get there, and just continue to make everyone better.”

Howard, a three-time All-American, finished her career with 2,290 career points and joined Valerie Still and Dan Issel as the only players — male or female – to score more than 2,000 points in a career. Howard averaged double figures in all four seasons with the Wildcats and averaged 20 or more points per game in her final three seasons, including 23.4 points per game as a sophomore.

The versatile guard averaged 20.5 points and 7.4 rebounds per game as a senior and helped lead Kentucky to its first Southeastern Conference Tournament championship for the first time in 40 years. She scored 18 points in a 64-62 upset of eventual national champion South Carolina in the tourney finale. She scored 88 points during the team’s successful four-game run in the tournament.

Although she was projected to be one of the top players in the draft prior to the season, Howard stayed focused on “where my shoes where.”

“I knew that wouldn’t have been possible if I was focusing on the next level, which was months to come so early,” she said. “Actually it wasn’t too difficult because my teammates, like they obviously knew what the next level was, but I was like, hey, I’m here for y’all, like whatever y’all need me to do, I’ll do it, and I was just there to compete and just work with them and play with them. It was like my last year in college,

She hopes to build on her success during her upcoming rookie season.

“By the end of my first season, a goal is really Rookie of the Year, but I want to be part of a winning team,” she said. “That’s the end goal.”