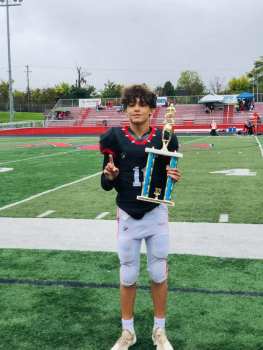 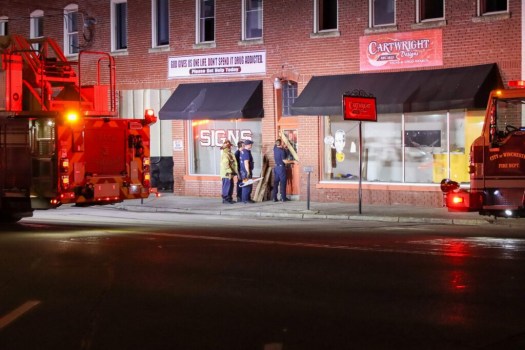 Firefighters at the scene of the fall at the corner of Church Alley and E. Broadway St. - Photo by Whiskey and Wiles Photography

A Winchester boy suffered what local fire officials described as “traumatic” injuries sustained from a fall off a local building Tuesday.

12-year-old Kameron May fell off the building that in recent years housed Cartwright Designs. The building is located at the corner of Church Alley and E. Broadway St.

The fire department was dispatched to the scene at 8:30 p.m.

When crews arrived they were met by a friend of May’s who is the only known witness.

“At first we didn’t find anything. We were met by a child who filled us in on where their friend was the last time they saw him,” Battalion Chief August Fisher of the Winchester Fire Department said.

Fisher said that the friend told the crew that May “had just dropped out of sight” upon completing the climb.

May was located minutes later.

“We ended up having to force open a few doors and we found them on the ground, left of the building,” Fisher said.

May’s injuries were severe enough for first responders to take him straight to UK’s Chandler Medical Center in Lexington.

Fisher said that he has a son the same age as May, so the situation hit close to home.

“It was a terrible accident. Just kind of crazy. You hate to see something like that happen to a young person,” he said.

May’s mother, Brittany Hilario, said in a phone interview with the Sun that her son is in critical but stable condition and that the next few days are vital. She said she wanted to thank the local first responders who got to her son and asked that the community continue to keep him in their prayers.

Hilario has also provided updates on his condition via social media over the past two days. According to Hilario’s posts, May is suffering from a fractured skull, swelling of the brain, a broken nose, and numerous cuts and bruises. May is reportedly responsive to being poked and prodded by hospital staff, is absorbing food well through his stomach, and is breathing well enough to have his ventilator setting lowered.

A prayer vigil has been organized for May. It takes place at 7 p.m. tonight on the steps of the Calrk County Courthouse.