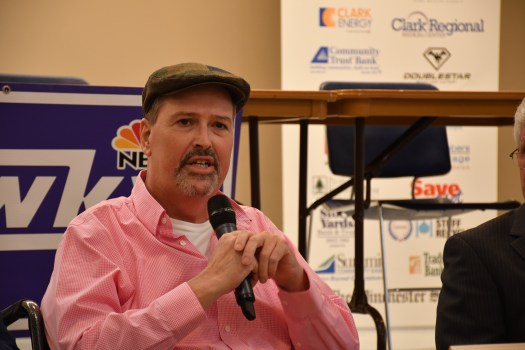 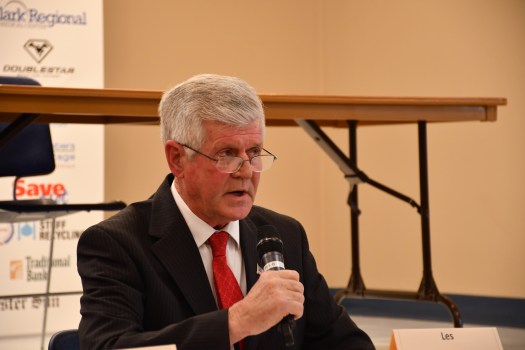 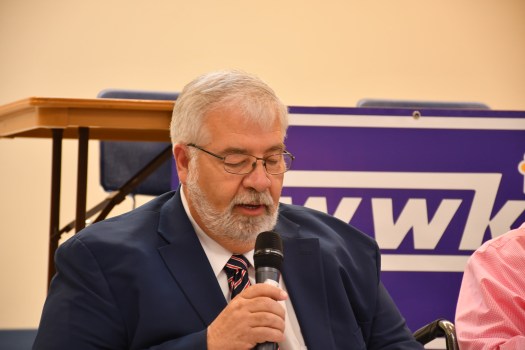 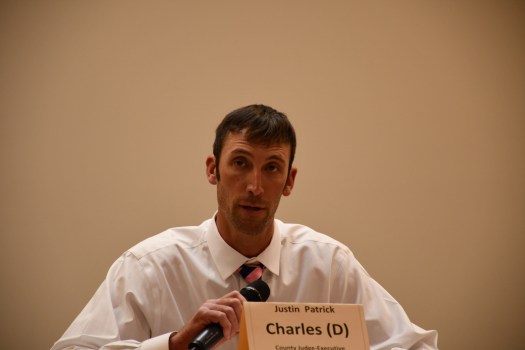 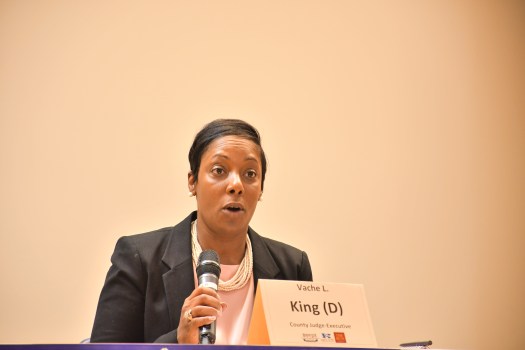 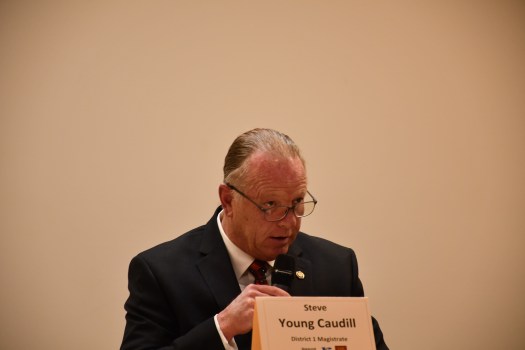 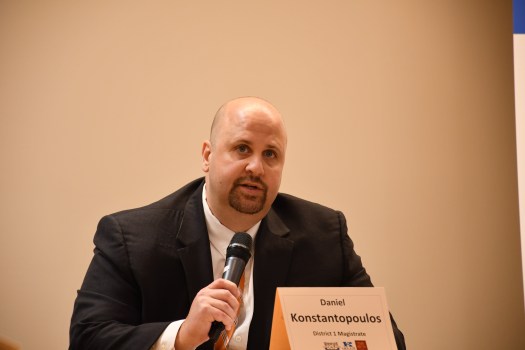 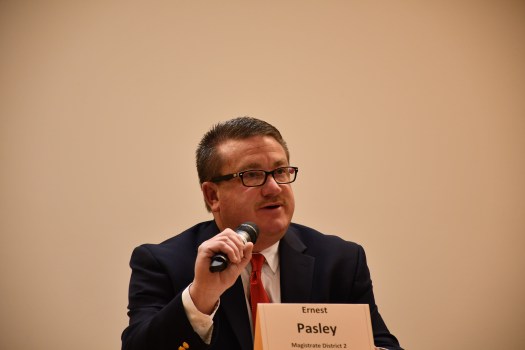 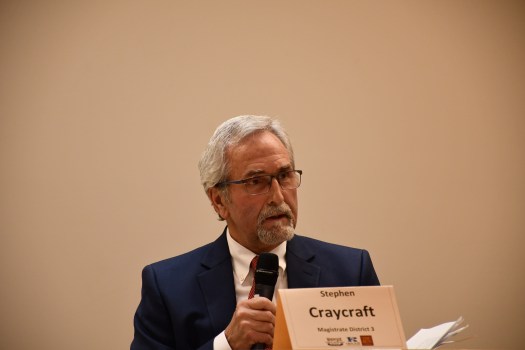 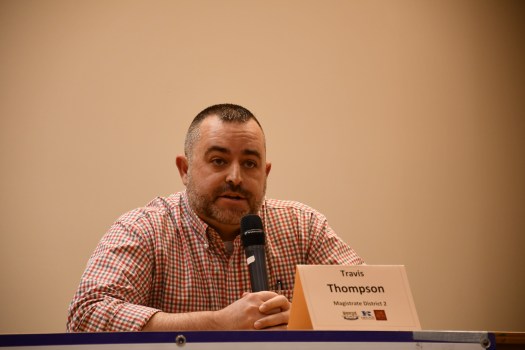 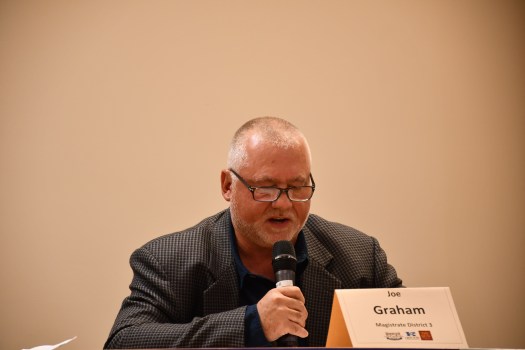 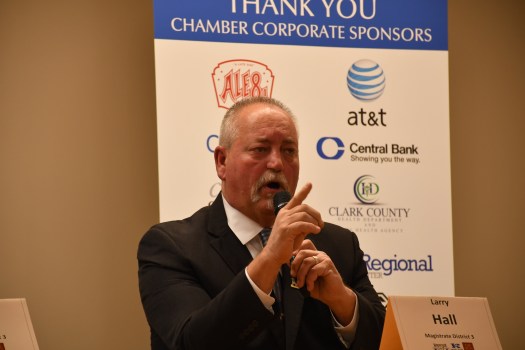 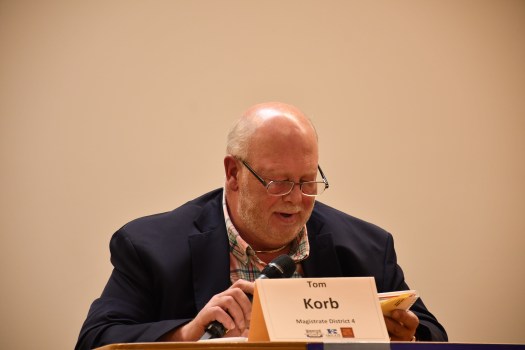 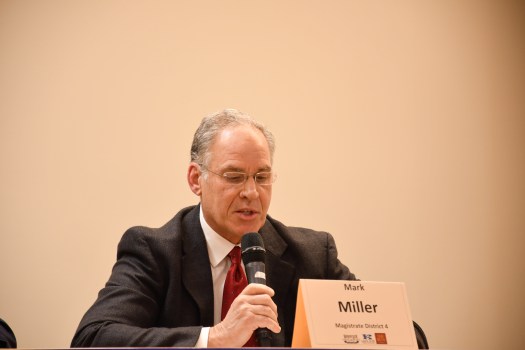 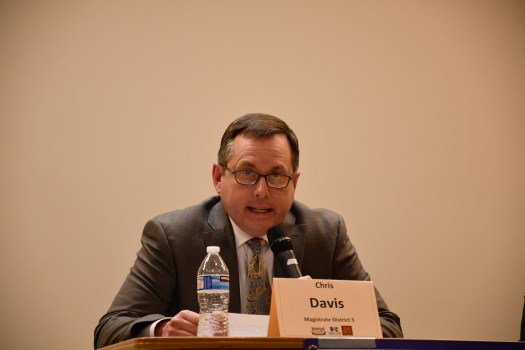 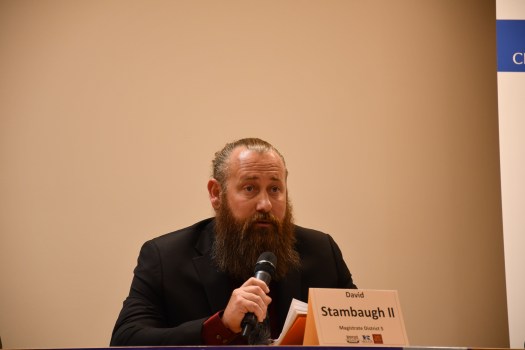 Clark County voters got their first chance to hear from the candidates in key county races Monday evening at the Clark County Extension Office before the May 17 primary election.

The candidates for county judge-executive and fiscal court magistrates participated in a forum sponsored by the Winchester-Clark County Chamber of Commerce, WWKY radio, and the Sun.

Each candidate had two minutes two give an opening statement and then one minute to answer four submitted questions.

So what did voters learn?

A majority of the candidates came out against industrial solar farms or favored further studying the heated issue.

Besides that, the candidates espoused a plethora of reasons why they are running and shared different visions for Clark County.

Here are the highlights:

Judge-Executive (R)
It is a three-man race to get the GOP nomination for the county judge’s chair.

Magistrate Greg Elkins vowed that he would continue the work of the current fiscal court: improving services, cutting taxes, and increasing the pay of county employees.

If elected, Elkins said he would improve Clark County’s infrastructure, such as expanding broadband internet access and sanitary sewers in rural areas.

Robert Gayheart spoke to voters about his 14 years of service as county corner; he admitted that he would have much to learn about the job, but more than anything he wants to bring people together.

Uniting the county, in Gayheart’s opinion, would allow the area to fulfill its full potential.

Les Yates said that the government of Clark County belonged to the people and not just different cliques. He said he was qualified for the job due to his time as a state representative and that he had no family to hire for government jobs.

Yates also said that he was encouraged by the number of people running for office this year.

Justin Charles and Vache King are campaigning to head the Democratic ticket in November.

Charles said that as a life-long resident of the county, he wants to see it thrive and was inspired to make that happen after the birth of his son. He said that he desires to bring the traits that have made him a successful business owner to the office: transparency, accountability and cooperation.

Though it has its charm, Charles said that Clark County is much the same as it was when he was growing up and that it will take hard work across all levels of government to bring about needed change.

King touted her experience in business negotiations and pledged to bring together parties with a vested interest in the community to create equitable opportunities for all.

If she is elected, one of King’s goals is to ensure that local individuals and organizations fighting addiction have the necessary resources and help they need.

Konstantopoulos touted his record of voting to increase funding for projects like body cameras for local law enforcement and improvements to area parks–all while lowering taxes four years in a row.

If reelected, Konstantopoulous said he would continue to support different infrastructure projects that the current fiscal court has already begun.

Caudill said that he is running for the same seat formerly occupied by his grandfather and that there needs to be change at the courthouse from what he called a “godless” fiscal court.

Thompson said that if elected to a new term, he looks forward to working with a court that will hopefully work together in a bipartisan manner and that he wants to focus on
solving the local drug problem.

Pasley said that he will govern with conservative values and will work to limit the number of special taxing districts that fall out of the review of the fiscal court.

Graham said that he believes that the government is infringing on citizens’ natural rights and is running for reelection to defend his constituent’s rights. He spoke against special taxing districts and pledged to support local law enforcement.

Larry Hall said he wants to serve the county like his father did in law enforcement and would govern with his father’s values.

Stephen Craycraft said he is a candidate that believes in fiscal conservatism, low taxes, responsible spending, and local growth initiatives. He said he is running to give back to the community where he chose to raise his family.

Korb said by getting into politics that he has a vested interest in the county’s success. He praised the current court’s leadership and said that nothing needs to be changed about how the county is run.

Dr. Miller said he wants to be elected to give back to the community and to ensure that government remains transparent and that tax dollars are spent wisely. He also wants to tackle the local drug and homeless problems and fix parts of the county sewer system.

Davis is pinning his reelection hopes on his record. He said he voted to improve funding for local law enforcement and area parks, but there is still work to do, such as enhancing county sewers, bringing reliable internet to rural areas, and building a fire station in the western region of the county.

Stambaugh said that the area is stagnant, which necessitates a change in leadership. He said that change would hopefully foster improvements that will make people want to move to the area.