Thank you, thank you, Virginia Thomas; plus city commission notes 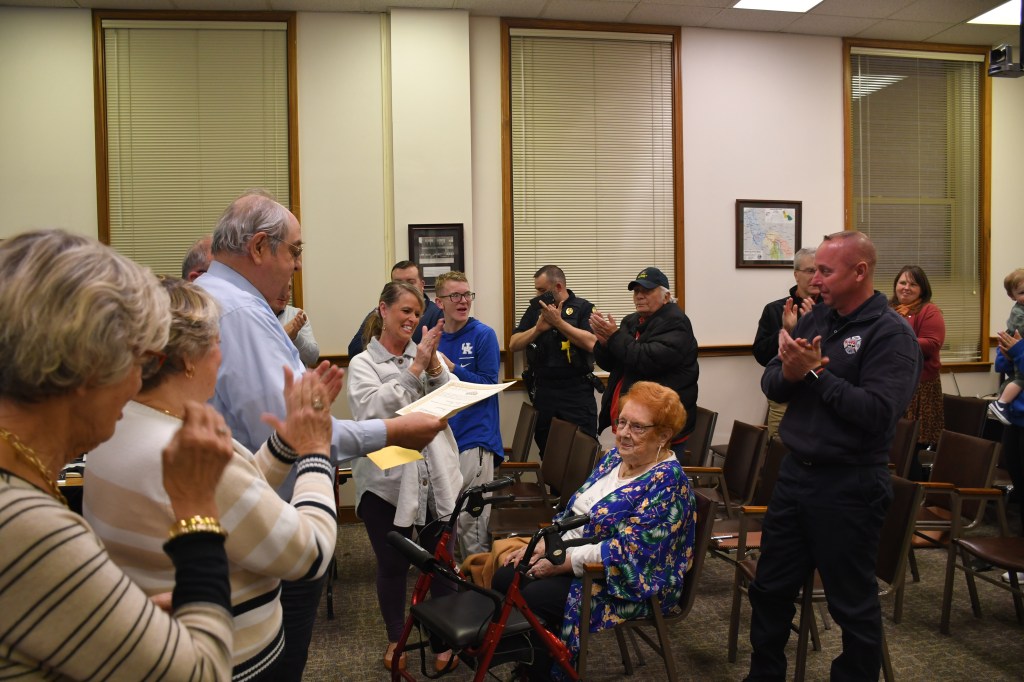 Virginia Thomas receives a round of applause during Tuesday's board meeting. - Photo by Warren Taylor

The Winchester Board of Commissioners recognized a local woman for her years of charitable work Tuesday.

Mayor Ed Burtner and the board presented Virginia Lois Thomas with a service award certificate.

“The Winchester Board of Commissioners takes pleasure in commending Virginia Lois Thomas,” Burtner said. “This service to the city award is given to those who distinguish themselves through outstanding achievement, self-sacrifice, and service to the citizens of Winchester, Kentucky.”

Thomas is known throughout the community for purchasing Christmas gifts for those in need and food for the multiple blessing boxes located in the city.

“Thank you very much for your service,” Burtner said to Thomas.

Thomas also received a gift from the Winchester-Clark County Unity Committee to assist with the costs of replenishing food stock in the blessing boxes.

Storm Water Study and Proposal
The board voted to accept the findings of a stormwater study performed by Integrated Engineering.

The study proposed improvements to the system in the vicinity of Wall Alley and Maple Street.
City manager Mike Flynn said that the study found the current state of the storm sewer to be in a deteriorated condition and that it lacks the capacity to handle an excess flow of water.

The proposed improvements would see the system brought out from underneath nearby homes. New pipes and inlets would be installed.

Bond Ordinance
The commission voted to pass an ordinance authorizing a utility system revenue refunding bond that will total $4.495 million.

Authorizing the bond is one of the first steps in getting industrial development bonds approved for Catalent Pharma Solutions’ planned expansion in the Winchester-Clark County Industrial Park, city attorney William Dykeman said.

Street Closures
The commission granted a request from Remember When Cruisers to block a portion of Main Street running from Washington Ave. to Broadway Street during the Rock the Block Concert series on May 8, June 10, July 8, and Aug. 12.

Ordinance
The board heard the first reading of an ordinance that would close an unnamed and abandoned alley that runs southwest from Patio and Hamilton streets.