Snapshots from a work session 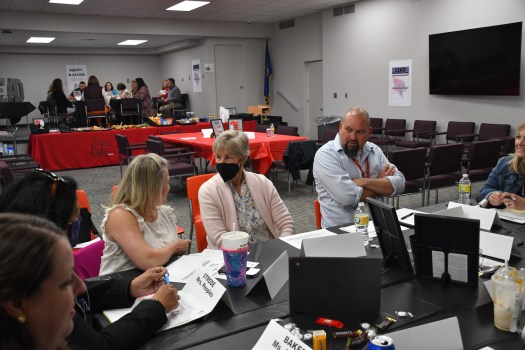 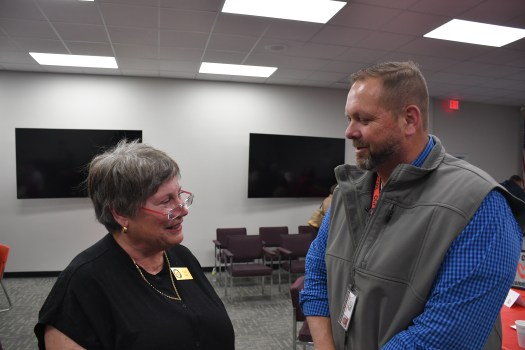 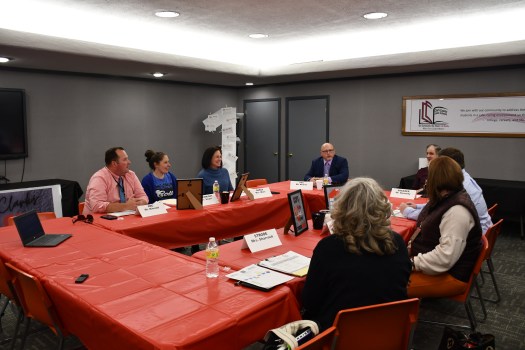 Board member Ashley Ritchie during her session on school safety. - Photo by Warren Taylor.

The board room at Clark Public County Schools’ central office was packed and noisy as staff and teachers from different district schools gathered for a work session with the board of education.

No official actions were taken at the meeting, and no proposals were made Tuesday. Instead, there was conversations about what is going on around area schools.

The event was the first of its kind in Clark County, and Superintendent Molly McComas said the event’s purpose was to bring people together.

“We are trying to demonstrate that we are becoming a stronger school system over a system of schools,” McComas said.

Board members rotated through five sessions that focused on different subjects: social and emotional learning, equity and access, safety, parent and community involvement, and academics.

The event’s origin came from a desire of the board members themselves.

“Board members wanted to interact more with schools,” McComas said. “I wanted to support that but wanted to demonstrate that we don’t operate in silos. We want our schools to come together and show the continuum of work that we are doing.”

The work session had a special guest sit-in after she heard about McComas’ work as superintendent and wanted to see it for herself.

“I had heard about Dr. McComas’ efforts to re-envision the direction of education in the county and trying to get everybody throughout the system on the same page,” said Claire Batt.

Batt is an at-large member of the Kentucky Board of education and was further intrigued by the work sessions.

“I think that it is really interesting and it makes conversation with individual board members easier,” she said.

The first session that board member Brenda Considine attended focused on social and emotional learning.

“It covers a multitude of things like individual and small group counseling for students, behavior response, and crisis response,” Conkwright Elementary counselor Kari McGrath explained. “It also covers whole group social and emotional learning, like at the elementary level, friendship skills, emotion regulation and things like that.”

“We have 20 minutes a day where we can build relationship with our students,” Pigg said. “They have selected their teacher or their topic that they want to be with–they had an area to choose. That’s really helped us get to know kids and build relationships.”

Richardson asked what that specifically entailed.

“I offer agriculture,” Pigg said, “So a student who is not enrolled in my agriculture class wants to come down and get a 20-minute, hands-on activity, like if we are building a project for the community, they can.”

“Kevin Anderson at RDC is phenomenal,” he told the room. “I see our school resource officers two ways: the relationship they build and the police presence in our school … The amount of kids that will flock over and talk to him [Anderson], not because he is forcing him or because he is doing anything special, he is standing there. They know because they see him in the lunch room and they see him in the hallway. They know him as a great guy.”

“Not that we want to put kids in jail or press charges on kids, but sometimes those things happen,” he said.

During Batt’s session on parent and community involvement she heard that one of the unique challenges schools face in keeping in touch with parents/guardians are disposable cell phones and changing phone number which often result in long quests to find the adult responsible for a student.

When each board member, like Bill Taulbee, went to their session on academics they were able to choose from topics such as scheduling or educational interventions.
It takes time for school districts to begin speak with one voice but a few simple conversations is definitely a good start.