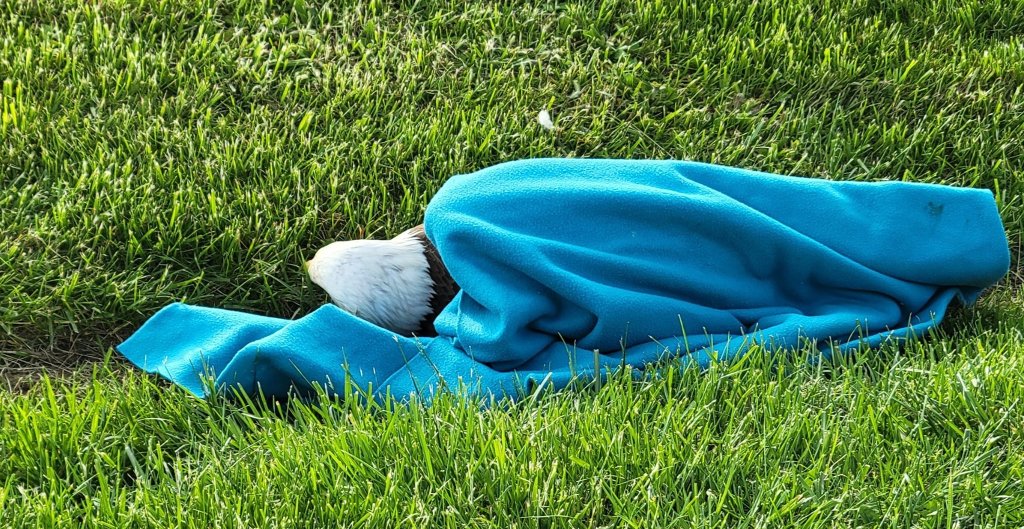 Holly Lovings was taking her son to soccer practice on Monday night when she noticed something odd on Van Meter Rd: two residents attending to a downed bald eagle.

Lovings said she dropped her son off at practice and joined Tiffany and Guillermo Viveros at the scene.

Thus started an attempt to save the life of one of Americas’s national birds.

“Monday evening, we were made aware of an eagle that was possibly injured near the soccer complex on Van Meter Rd.,” the director of the Clark County Animal Shelter, Adreanna Wills, said.

When Wills arrived on the scene, she found that officers from the Winchester Police Department and the Clark County Sheriffs’ Office had secured the eagle.

“I had supplies with me to go ahead and get it in a crate and in a safe place until we figured out what we were doing,” Wills said.

There was heavy traffic in the area and several ongoing soccer matches, so getting the injured bird to safety was imperative.

But, few wildlife rehabilitation experts in Kentucky specialize in raptors–birds of prey such as peregrine falcons and red-tailed hawks.

Raptor Rehabilitation of Kentucky, located in Louisville, is one such organization. They quickly agreed to take the male eagle.

Sadly this not story does not have a happy ending.

“Unfortunately, he passed shortly after he arrived there,” Wills said.

What caused the eagle to become grounded remains a mystery.

“We don’t know at this point what was going on with him,” Wills said. “We initially thought he was probably struck by a vehicle because of his location, but being out in the open and with that much traffic, we weren’t able to do an assessment there because time was of the essence.”

The raptor rescue assessed that the eagle was underweight and had been in poor condition for a time.

Because eagles are federally protected birds, the rescue will perform a necropsy on the animal.

“They can use that information to develop programs that are still in our area,” Wills said.

So what should someone do if they come across an injured eagle?

The best advice, according to Conservation Officer Sgt. Rufus Cravens of the Kentucky Department of Fish Wildlife is to leave the animal alone and connect with a wildlife rehabilitationist.

“I’ve seen them myself in different areas like down around the Clark County Fish & Game Club, the Paris Pike area, and I’ve seen the ones down by WMU (Winchester Municipal Utilities),” Cravens said. “There used to be a nesting pair down on the Kentucky River near Four Mile Rd.”