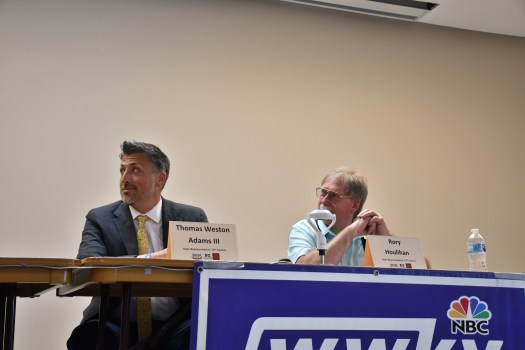 The Democratic candidates for state representative out of the 73rd District: Thomas Weston Adams III and Rory Houlihan. - Photo by Warren Taylor 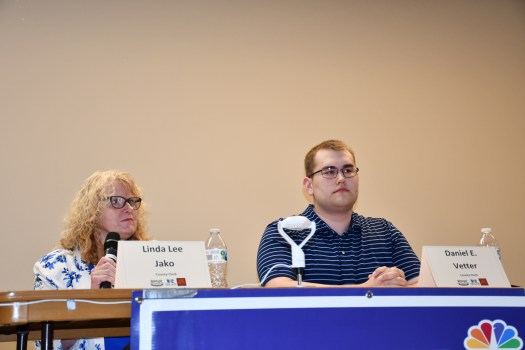 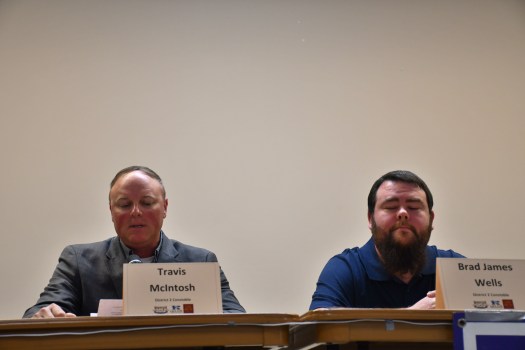 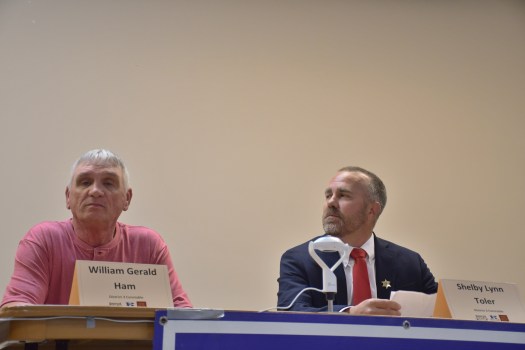 The event was sponsored by the Winchester-Clark County Chamber of Commerce, WWKY radio, and the Sun.

The forum featured candidates for Clark County Clerk, Clark County Constable, state representative, and the Winchester Board of Commissioners.

Each candidate was given two minutes for an opening statement and one minute to answer the subsequent questions.

Due to limited print space, this story will focus on the candidates for the county office. A story on the city office candidates will be in next Monday’s edition of the Sun and posted online over the weekend.

In his opening statement, Adams said he believes that he can “change the world”.

“I’ve got a lot of great ideas that I want to share with you tonight,” Adams continued. “I believe that good ideas, great communication, good intentions, strong relationships, a willingness to never stop learning, and, most importantly, caring about each other, with those things we can do so much good.”

Houlihan opened by speaking about when he first started living in the area, he dwelled in a tent, but his family was able to get on their feet thanks to “the best folks I’ve known”.

“My problem-solving skills, problems are easier if you keep things simple,” Houlihan continued, focusing his statement on climate change. “We don’t have all day, and we don’t have all night. We need to be focused and quick. A delay will be deadlier and costlier.”

The first question asked how each candidate would bring Kentuckians back together.

Houlihan said he would take a moderate approach.

“We need to be more moderate in temperament and numbers,” he said. “It is the moderate person who listens to people and listens to both sides … Who is willing to listen and do what other people want to.”

Adams said it is necessary to fight back against the divisive nature of modern politics.

“Bigger things are on the table here, and we are going to need to learn to work together,” he said. “If you look at my conflict style … The thing I score the highest on is collaboration. It doesn’t mean that I don’t like to win; it just means that when I win, I don’t want to be doing it alone.”

The next question focused on economic development and how they would change Winchester’s reputation as a “city of no.”

Adams got the first crack and said that the best way to do that is to brand Winchester as “a place that can be for everyone” and that state and local policies need to be made with the idea of welcoming people from all backgrounds in mind.

Houlihan said that the biggest issue is that the area has leadership focused primarily on “saving money” and that Winchester has all the elements needed to succeed; it just needs to bring them together and invest in them.

The next question asked how the candidates would fight for Winchester and Clark County in Frankfort.
Houlihan said he would form a coalition with leaders from the surrounding area to implement better policy.

“We have a lot of needs. We have a lot in common. If we work together, we will get the votes to get things done,” he said.

Adams said he would provide exemplary leadership at the state level.

“I’m a teacher and a long-time educator. I’m going to advocate for our schools. We’ve got some good stuff going on here, but we could be better at it. Homelessness is a big problem here, and I’m not just here to talk about it; I want to end it,” he said.

The final question dealt with education.

Adams reiterated that he would be an advocate for local schools, and they deserve more respect than the current state legislature currently gives them.
Houlihan advocated for an extended school year so that parents can work more and that students will not lose their learning.

The race for the Republican nomination is a three-way race between Paula Edwards, Linda Jako and Daniel Vetter to face incumbent Democrat Michelle Turner in the fall.

Only Jako and Vetter were present at the forum.

Jako’s opening statement focused on her commitment to being a Christian conservative, her experience working in the county clerk’s office, and her experience managing various businesses.

In his opening statement, Vetter said inexperience should not count against him and that Clark County needs new conservative leadership.

The first question asked how the candidates would improve the county clerk’s office.

Vetter said he wants to improve the office’s digital footprint and literacy and that its website needs to be revamped.

Jake agreed that the website needs to be updated with better information about local elections and what forms are necessary to register vehicles.

The next question posed dealt with the challenges the office brings.

Jako said it was making sure that the office staff is adequately trained and continues to learn.

Vetter said the biggest challenge is the sheer number of people the office serves.

The next question dealt with where the candidates saw Winchester in ten years.

Vetter answered that he sees the city thriving and a vital part of Kentucky.

Jako said she hopes to see Winchester well advanced in growth from its present state.

The final question asked the candidates to name personal strengths and weaknesses.

Jake said her strength is managing people and that people all have plenty of weaknesses; to offset them, she is willing to stay humble and learn.

Vetter said his strength is his young age, 21, and his weakness is that he is prone to overthinking.

Only McIntosh and Wells were present at the forum.

McIntosh focused his opening statement on being a good steward of the land.

Wells’ opening statement highlighted his many years of community service teaching firearm safety and stressed his training in law enforcement prepared him to wield the power of his office.

The first question asked the candidates to explain their training or experience that qualified them for the office.

McIntosh said he would be willing to take any training required of him and that he has a long history of local service.

The second question asked the candidates how they would use the office of Constable to bring value to Clark County.

McIntosh said he would serve the community and provide backup service to local law enforcement.

The third question asked how the candidates would enhance what is going well with the office.

Wells talked about the duties of a constable and that he wants to continue to focus his work as a process server of court papers and community involvement.

The final question asked the candidates to name personal strengths and weaknesses.

McIntosh said his strength is his ability to be a self-starter and that his weakness is that he often may not give something his full attention due to being overcommitted.

Wells said his strength is his analytical mind and that his weakness is an inability to say no.

Toler spoke about his nine years of law enforcement experience and 200 hours of constable training.

Toler said that training is everything to him and that he is constantly learning. He also said he wants to expand his pool of knowledge.

Ham said he would take all the training he could get to perform roles of the office if elected.

On using the office to bring value to the community, Ham said he would work to take some of the workload off of local law enforcement.

Toler highlighted the good works of the Clark County Constable’s Association and the extra law enforcement work the office provides.

On continuing what is going well in Clark County, Toler said he would work well with the fiscal court and county attorney’s office on child support collection efforts.

Ham said he would continue the child support collection efforts.

On the subject of personal strengths or weaknesses, Ham said that his strength is his availability, and his weakness is he likes to talk.

Toler said his strength is his commitment to the oath he took to serve the people, and his weakness is an inability to say no.