Chicken with a side of smiles 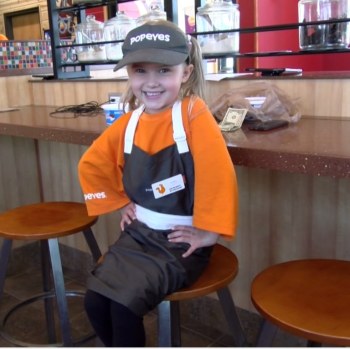 - Winter Gilbert was a hit with Winchester Popeyes customers when she handed out coupons on Sunday. - Submitted photo. 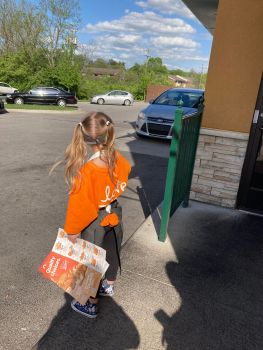 A pint-sized helper at the Winchester Popeye’s brought joy to customers last Tuesday and Sunday.

Six-year-old Winter Gilbert first melted customers’ hearts last week when she had an unexpected day off from school.

When Clark County Public School’s announced a non-traditional learning day, Winter’s mom, Kayla Gilbert, had no choice but to bring her daughter to work.

Winter was given a headset, an apron, and the polo shirt that all restaurant employees wear.

“She greeted everyone, and everyone loved her,” Gilbert said.

One customer was so enchanted by their encounter with the smiling kindergartner that they shared a photo of her in the popular Facebook group “You Know You’re From Winchester”.

The post quickly piled up numerous shares and likes.

“They were so thrilled to see her smile and everything,” Gilbert said. “From there, everyone said that they wanted to come see her.”

Gilbert said she promised Winter $5 for ice cream for coming to work with her. Customers were soon donating to Winter’s ice cream fund on Tuesday.

Unfortunately, the attention prompted a visit by the Kentucky Labor Cabinet after an anonymous complaint.

Jonas Snow, the general manager of the Winchester Popeye’s, said the cabinet did not find any evidence of illegal child labor.

He also said he had no issue with Gilbert bringing her daughter to work.

Winter nor any other employee’s child have ever been an issue at the restaurant.

“They sit here in the lobby and play on their phone,” Snow said. “They never act out. I’ve never had a problem with kids here.”

Thankfully, Winter was able to return to Popeye’s on Sunday for a meet and greet with her adoring public.

Snow said that the event was not planned by any restaurant employees and was organized by the public.

In a follow-up Facebook message with Sun, Gilbert reported that Winter had an excellent time handing out coupons and collecting donations for her ice cream fund.

Most importantly, Winter got to do one of her favorite things: make people happy.

“She loves making people smile. She loves to laugh. She loves to dance,” Gilbert said about her daughter. “She is the most caring child ever. You can sit down, have a conversation with her, and if something is wrong with you, she will give you a hug.”