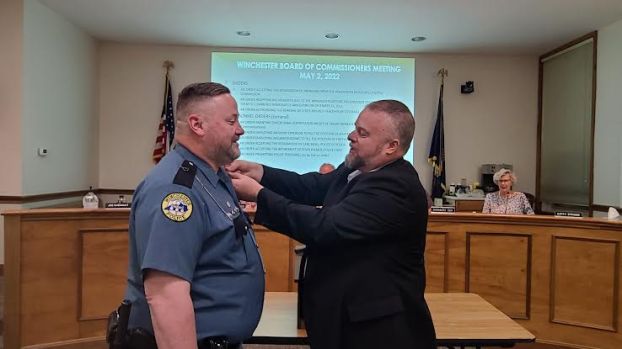 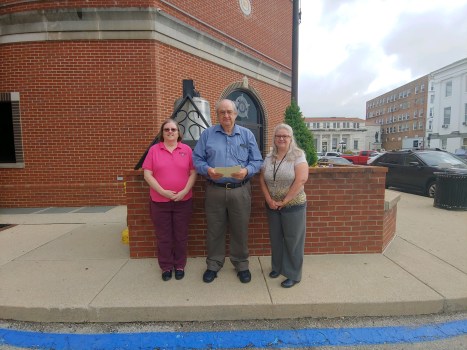 Winchester will have a new police chief starting at the end of the month.

Capt. James Hall of the Winchester Police Department will be elevated to the rank of chief upon the retirement of current Police Chief Kevin Palmer, effective May 31.

The Winchester Board of Commissioners accepted Palmer’s retirement and approved Hall’s promotion at its Tuesday meeting.

Palmer presented his successor with a pin of rank.

“I apologize for the stress, but here is some more,” Palmer joked and then added, “Brother, they are heavy.”

Hall told the board that replacing the chief would not be easy.

The chief-to-be is pleased to have the board’s faith to perform his new duties.

“It is a great honor to be given the trust by the commission to serve in this capacity … I’m looking forward to helping [the department] move forward into the future,” Hall said.

He also expanded on why the department will miss Chief Palmer.

“He has made numerous changes to the department over his tenure that have pushed us forward into the 21st century,” Hall said.

Both Hall and Palmer have 20 years of experience in law enforcement. Hall is currently in charge of the department’s criminal investigations division.

“The clerks have always been very impartial, hardworking and just do a great job,” he said.

The proclamation was in recognition of Professional Municipal Clerks Week, which runs from May 1-7.

Ordinances
The board heard the second reading of two ordinances and voted to adopt both.

One ordinance closes an unnamed alley that runs southwest from Patio St. to Hamilton St.

The other is an ordinance that approved issuing a $4.495 million utility system refunding bond.

Street Closure
The board voted to accept a request from Abettor Brewing to close Depot St. on July 16 and Sept. 24 for a night market event.