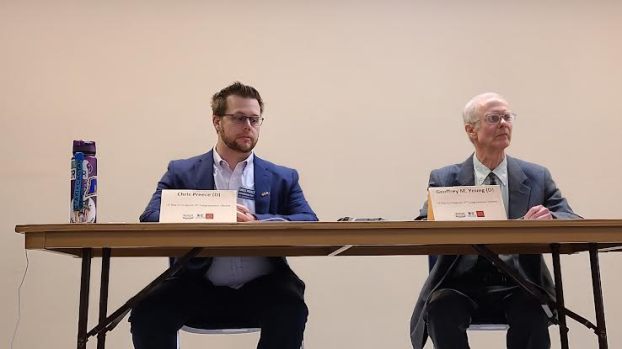 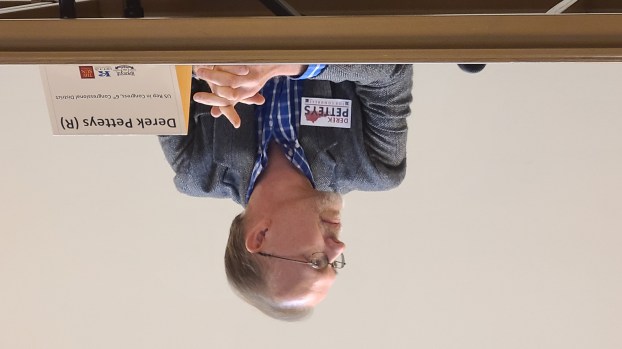 The Winchester-Clark County Chamber of Commerce, WWKY Radio, and the Sun hosted its final candidate forum.

Candidates for the U.S. House of Representatives and the Senate were on hand to articulate their plans for Kentucky and the nation.

In the interest of space, this story will focus on candidates running for the seat in Kentucky’s 6th Congressional District. A story concerning the senate candidates will be in next Tuesday’s newspaper.

To view a video of the whole event visit the chamber’s Facebook page.

Democrats Chris Preece and Geoff Young are competing for the nod to represent their party on the November ballot.

Question: What can Congress do to affect the high costs facing Americans?

Preece: We operate under capitalism and trying to create this market, competitive companies competing against one another. For a long time, we have allowed companies to continue to consolidate into bigger and bigger and bigger companies without really trying to stop a lot of these mergers … It is imperative that we look at these huge companies and break them up into smaller companies to increase the competition. If we continue to allow this consolidation, then it is easier for a lot of these companies to talk with one another and price fix. Then at that point, it is no longer a system that really operates under competition.

Young: You have to know what is causing inflation, and right now, there are two main causes. One, is excessive spending on wars and weapons. For the last 70 years, we have not been putting our money, our public money and tax money, into what we should. It doesn’t help build up America. Two, sanctions, the United States has been sanctioning Russia, China, Iran, and many other countries. What those do is they reduce trade. The sanctions are not going to work. We cannot sanction Russia because they can get everything they need from China and other countries from around the world.

Question: What infrastructure projects do you see in central Kentucky and Clark County for priority in spending?

Preece: Certainly, there is an issue with roads. We need to continuously keep our roads up to date. I-75, there is crashes on there all the time, and it goes down all the time. Living in Berea, there is very long lines of trucks trying to drive through the town because there is a huge crash on I-75. That happens all the time—so better infrastructure in terms of driving and infrastructure in terms of broadband internet. You get out into rural counties … The only way you can get internet up that holler is satellite internet, which you watch one YouTube video and your cable is gone for the rest of the month.

Young: Our country’s infrastructure has been eroding and degrading for decades now. I think the main cause of that, again, is the excessive spending or waste on wars in other countries and excessive military spending on weapons systems we do not need and that do not make us more secure.

Derek Petteys and incumbent Congressman Andy Barr are vying for the Republican nomination. Barr was not in attendance at Thursday’s forum.

Question: What can Congress do to affect the high costs facing Americans?

Petteys: They can stop spending so much money. All it takes is to take a cursory look at the omnibus budget bills that happen yearly. We have countless and immeasurable amounts of money that are going to foreign countries that swear to destroy our nation. That is not acceptable. We also have pork-barrel spending here in the state, and across America, money that could be better spent on many things–veterans’ health care, for example–but the problems we have here is a matter of priorities. All these things that don’t matter and don’t amount to anything consequential.

Question: What infrastructure projects do you see in central Kentucky and Clark County for priority in spending?

Petteys: In the 16 counties that I have traveled in during this campaign, there is a common theme, and it is reliable, affordable broadband coverage … There are some places out there where you cannot get a cell phone signal and, of course, as we heard earlier satellite internet is incredibly costly and unreliable. So, from a standpoint of infrastructure development, I think we need to focus on that.