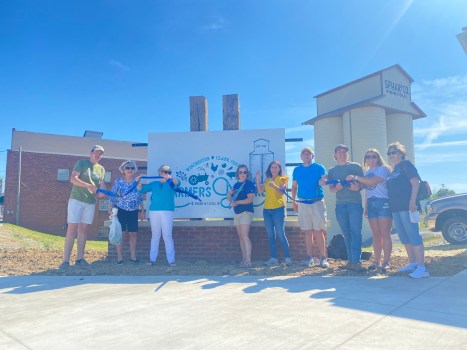 The Winchester-Clark County Farmers Market celebrated its the first day of the season with a ribbon cutting denoting the completion of the pavilion project on Deport Street. - Submitted photo. 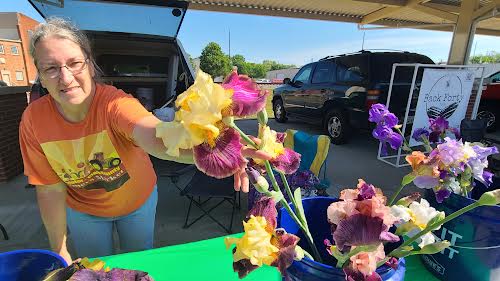 Vendors such as Rhetta Hancock, seen above, will offer all sorts of goods over the summer. - Photo by Warren Taylor.

The Winchester-Clark County Farmers’ Market kicked off its season on Saturday under sunny skies with a ribbon cutting.

The long-awaited pavilion and refurbished silos made their official debut on Depot Street in front one of the largest crowds the market has seen since its inception in 1989.

“This is the largest turnout that we have ever had,” said Seth Boyken. “Opening days are very busy but this is a very large turnout today. We are expecting somewhere around 500 folks today if not more.”

Boyken is the current president of the farmers’ market and is in his first year in the position, but he has been involved with it since he was young.

“I have been involved with the farmer’s market since I was eight-years-old,” Boyken said. “When I first started, we were actually down here at the Bluegrass Heritage Museum and we were in a gravel lot–before they even paved that lot some time ago. We made the change over to here, I believe during the 2014-15 season, to here on Depot Street, and I will tell you that significant amount has changed within that time frame.”

Vendors like Rhetta Hancock were impressed with the pavilion.

“I like it,” she said. “I lucked up and got a spot today. We are pretty full today and some people had to use tents … The tents–when it is windy, a huge windy day–it is really hard to keep them on the ground.”

Hancock has been a vendor at the farmers’ market for 16 years and currently sells bearded irises.

“They are like pieces of art,” Hancock said about the flowers. “Each one is unique in their own way and the simplicity of growing them–you can pretty much set the rise on the ground, put a little dirt up to the edge and they will grow. They love the sun and the heat, and need very little water. So they are very low maintenance.”

Angela and Shawn Lopez sold farm fresh eggs on Saturday but will switch up their wares later in the season.

The couple have sold at the market for two years and are ready for another successful summer.

“We do really good down here. Last year was a big success for us. We learned a lot last year and we looked forward to it. Opening day has been great for us, we are just about sold out”

Addie Brown made her first visit to the farmers market on Saturday and came away impressed.

“I really like the spot,” Brown said. “The coffee is really good and there are lots and lots of nice people,” Brown said.

The farmers market is open on Saturdays from 8 a.m. to noon.