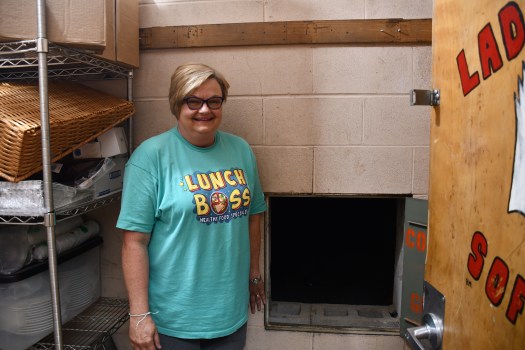 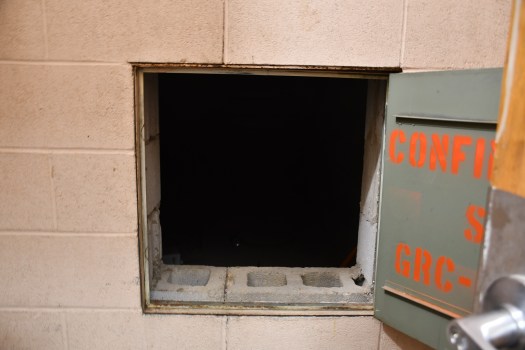 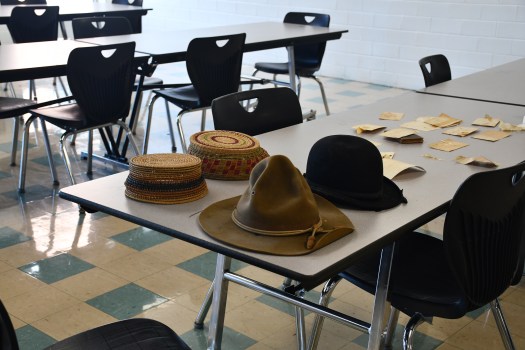 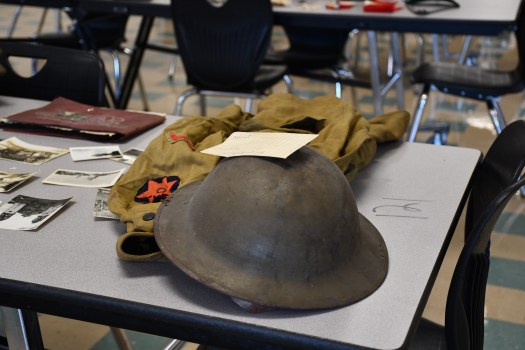 A hat worn by a solider from World War I was just one of many military artifacts recovered. - Photo by Warren Taylor 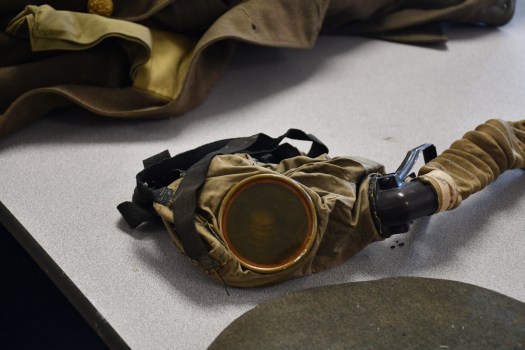 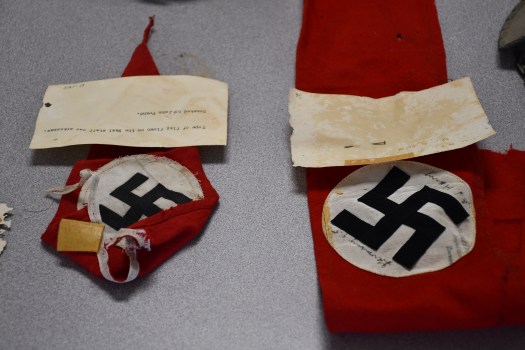 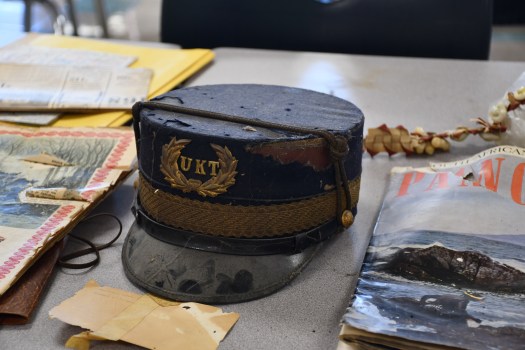 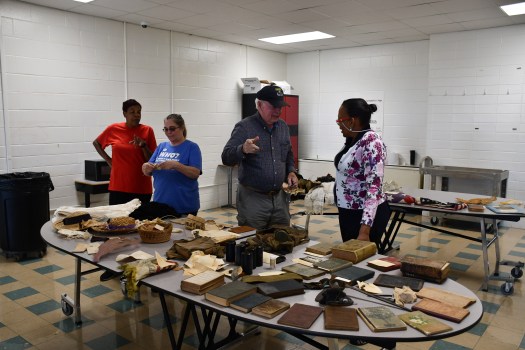 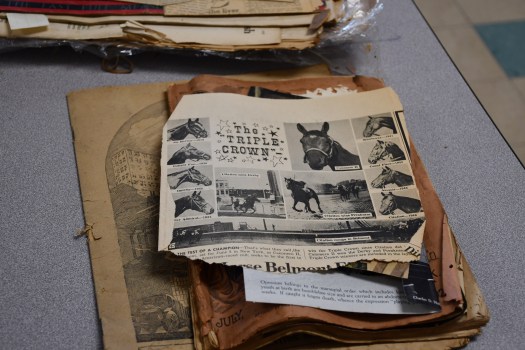 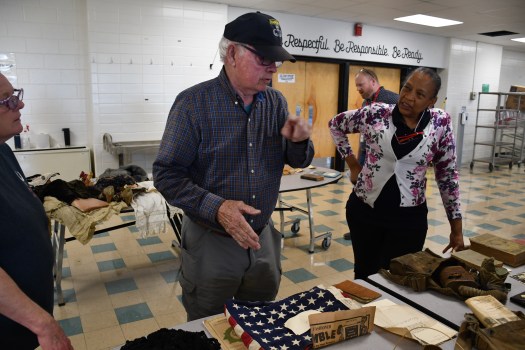 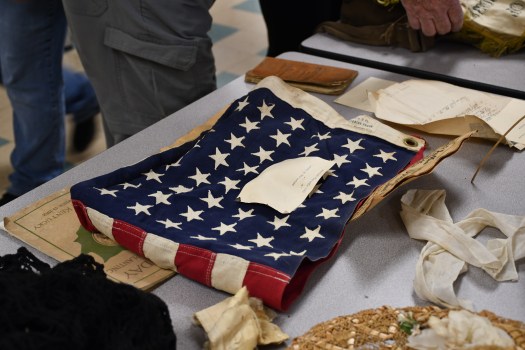 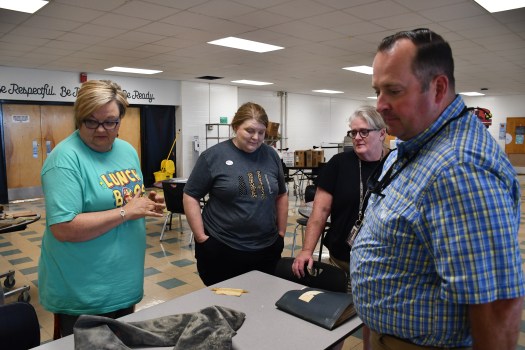 Anyone would be forgiven for overlooking the closet with Lady Cards painted on the door. Nothing stands out about it aside from its location near the Robert D. Campbell Junior High cafeteria.

As Jeanie Davis, the school’s cafeteria manager, would find out on Election Day, appearances can be deceiving and the discovery of a treasure trove of historical artifacts can happen out of the blue.

The cafeteria staff used the student’s Tuesday absence to deep clean the lunchroom and surrounding areas.

Davis decided to tackle the closet around 7 a.m.

“I was pulling everything out of that closet and I was going to sweep it good,” Davis said.

After emptying the closet and moving a shelf Davis saw something she had never seen before: a small rectangular door.

Of course, she opened it.

“The first thing on the back of the door, it said ‘Confined Space-GRC’, and then I turned the light on my phone and looked and I saw a gas mask. Then I looked a little further and I saw an American flag,” Davis said.

The gas mask and flag were the vanguard for a collection that includes military uniforms, flags, newspaper clippings, books and war mementos taken from Europe after World War II.

Davis immediately went and told her coworkers to come see what she had found. One of them asked a prudent question.

“The first thing my coworker said, ‘There is no body in there is there?’,” Davis recalled with a laugh.

Once they were assured that the closet was not a crime scene the staff went and saw what one of them dubbed “a time capsule.” Soon the staff was removing artifacts from the space.

Cafeteria workers Teresa Haggard and Kim Hix were part of the group who sorted the items.

“I couldn’t believe it,” Haggard said about her reaction.

“It is very interesting,” Hix chimed in.

Both agreed, though, that the find is like something out of a movie.

The staff knew they needed an expert to help identify what they had found and so they contacted local historian Jerry Cecil.

When Cecil got the call about the artifacts he was watching newborn geese and ducks at the local reservoir. He abruptly ceased his birdwatching and hurried to the school.

“It’s a great find. This is like going and find a 57′ Chevrolet in somebody’s barn,” Cecil said about the discovery. “You could go to a museum anywhere and not see some of these personal things.”

The artifacts cover American history from World War I all the way to the early 1970s.

Cecil also provided some context for the war mementos, some of which came from Nazi Germany, that filled an entire lunch table.

“Over on this table you have got what I call war souvenirs. Where GIs go through and they take something like that flag. This big chest plate over here that was probably worn by a mayor or city official. Then there is some German silverware as well,” he said. “I always look for the manufacturing date [on the silverware] because I collect these but these were in plain sight.”

Cecil identified several of the military caps in the collection.

“These were overseas caps and the color tells which branch,” he explained. “One of them is purple and silver–the medical corp. So, when you saw someone wearing that hat you would know where they served.”

RDC eighth-grade social studies teacher Taylor Bumgardner was floored by the discovery when she came to see it after hearing about it at a staff meeting.

“I never expected anything of this magnitude,” Bumgardner gushed. “I am just like a kid at Christmas. I want to get the kids in to see this so badly.”

She explained that the discovery fits in to how social studies is being taught.

“The focus of social studies has shifted where the standards really focus on teaching kids to look at primary sources, analyze them, and ask questions and come to their own conclusions,” Bumgardner said.

Which bring up the most pertinent questions about the discovery: what were the artifacts doing at the school to begin with and what will be done with them now?

The answers lay with the efforts of the school’s namesake, Robert Campbell, to bring history alive for his students, which is something that the school district intends to use the artifacts for.

More on that in the next edition of the Sun.