Winchester Walmart evacuated due to ‘irritant’ 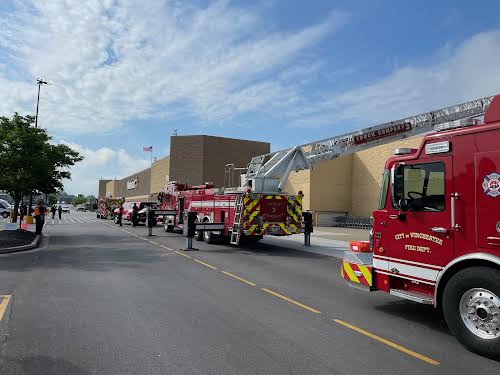 The Winchester Walmart was evacuated early Thursday morning due to an irritant making several people inside the building "naseuous". - Photo by Matt Cizek.

The Winchester Walmart was evacuated this morning due to an “irritant” making several people inside sick.

Local fire and emergency personnel responded to a call at the store, located at 1859 Bypass Rd, at 8:18 a.m.

Twenty-five people were treated for symptoms described as “coughing and an itchy throat” by Winchester Fire/EMS officials. Thankfully no one was hospitalized. The Sun reported earlier that an individual was taken away in an ambulance which was later confirmed to be false.

After arriving, firefighters went through the building and tried to isolate the problem by shutting down HVAC units.

Several different agencies and utility companies were soon on the scene to assist.

Fire officials said that a ventilation plan has been set up and that the investigation into the incident is still ongoing.

Later in the afternoon Walmart was given the go-ahead to reopen the store at its discretion.