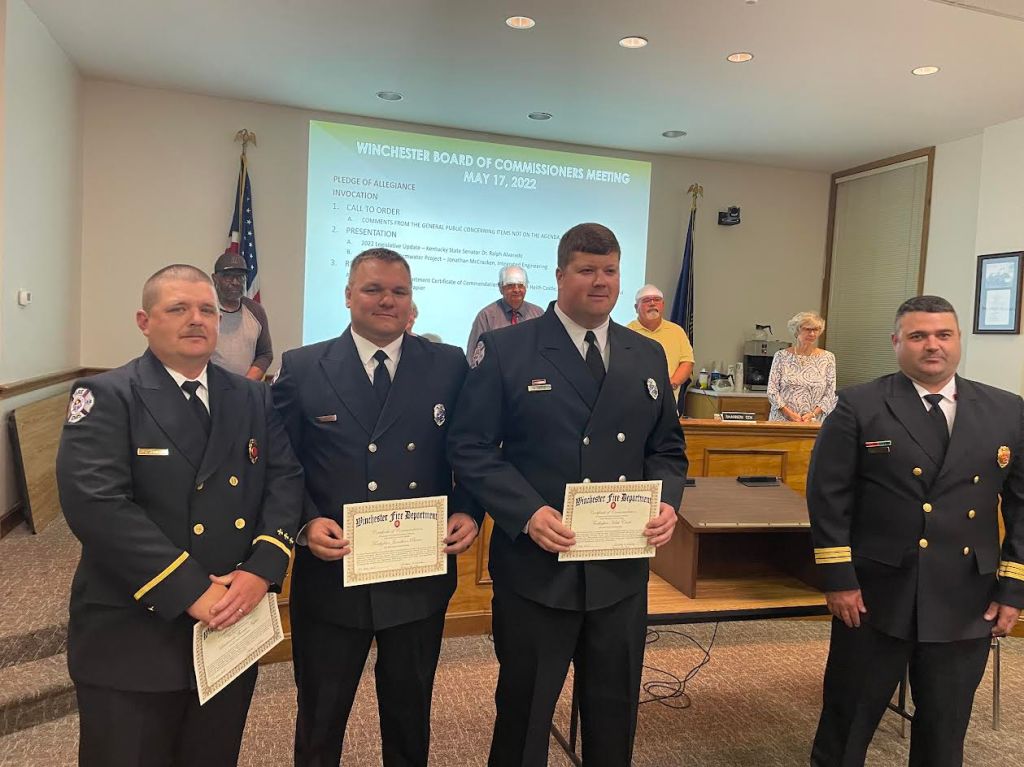 The three fire fighters were honored for saving the life of a young child in March. - Photo by Matt Cizek.

Firefighters are considered among the most highly ranked public servants. It’s a term that comes for a well-earned reason.

During a Winchester Board of Commissioners meeting on Tuesday night, three of Winchester’s finest – Lt. Tommy Napier, Jonathan Beam and Heith Castle – were awarded with the Fire-EMS Merit Commendation for a rescue mission that took place on March 18.

“The [award] is extended to those who distinguish themselves by heroism and/or outstanding achievement. ” Chief Chris Whitely said. “The act must be worthy of special recognition, special fire ground, or EMS recognition involving life-saving activity.”

Early in the morning hours of May 18 the Ladder 1 crew–consisting of both Napier and Castle–was dispatched to a second-floor apartment on Oxford Dr. in which a two-year-old was trapped.

After receiving details regarding the child’s whereabouts and further information about the building’s structure, Napier and his men ascended to the floor level – which was covered in dangerous heavy, black smoke.

While Napier monitored, firefighter Castle searched the area looking for the lost child.

Eventually, despite the hazardous conditions they were forced to work with – which caused trouble for Castle as he was disoriented due to a heavy amount of black smoke and soot – the child was found and, following mouth-to-mouth resuscitation, survived the ordeal.

. Despite being disoriented, Castle brought out the child.

“By his grace, we serve with dedicated service through teamwork,” Whiteley added. “A child was rescued.”

Immediately afterward, Engine 1 – consisting of Firefighter Beam riding in the position of an active officer – stretched a line of hose with the goal in mind to suppress the fire from raging any further while also protecting an exit point for the safety of all.

However, a near-tragic situation occurred.

With Beam second in line carrying the hose, a fellow firefighter in front of him had a malfunction with his facepiece – thus immediately being overwhelmed by smoke and forced to be carried out of the building by Beam after being knocked to the ground suffering from an ailment known as hypoxia in which oxygen is absent or very limited.

After his partner was replaced, Beam returned to the location to help put out the fire.

“A line of duty death was avoided,” Whitely said. “ It has been said many times by some in this room [that] our greatest asset is our people. If we believe that to be true, which I certainly do, one can also say appreciation is an increase in the value of an asset over time.”

While a whirlwind of an explanation can be offered, all of the above details took place in only a matter of moments, with the child being removed from the structure within minutes.

“[It was] three minutes from dispatch to [being] on scene, [and] four minutes from on scene to child rescue,” Whitely said.