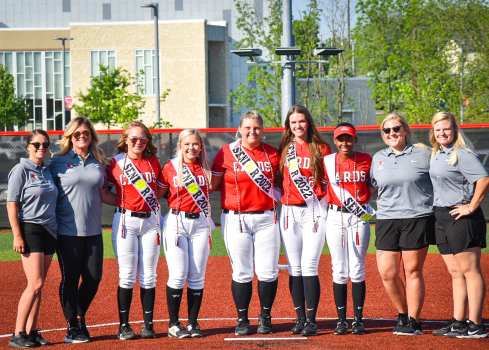 The Lady Cards said goodbye to five seniors with a 15-2 thumping of visiting Dunbar. - Photo courtesy of GRC Softball. 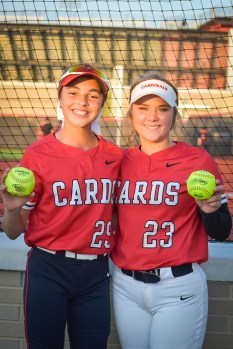 In front of a larger-than-average crowd at George Rogers Clark High School on Friday, the Lady Cardinals softball team recognized a group of five players on Senior Night.

On the field, they made sure not to disappoint.

Senior Marly Rogers hit a home run in her final regular season home game, and seventh-grader Bella Guinn delivered an additional round-triper in leading the Cards (13-11) to a 15-2 romp over Paul Laurence Dunbar (4-18) in the regular season finale.

With the win, the Lady Card kept their record above .500.

The game started somewhat inauspiciously for GRC, as Dunbar was able to score two quick runs in the top of the first inning.

However, with two outs in the second inning, GRC took charge.

The Lady Cards scored four runs with two outs – beginning with an opposite-field double by senior Simone Campbell – and the hosts never looked back as a 15-0 offensive run helped end the game in their favor.

Campbell, an outfielder and utility player, was one of the five players honored.

Schooler hit the milestone of 500 strikeouts in her career as a pitcher.

GRC opened up play in the 40th District Tournament on Monday with a game against the Bourbon County (10-18).