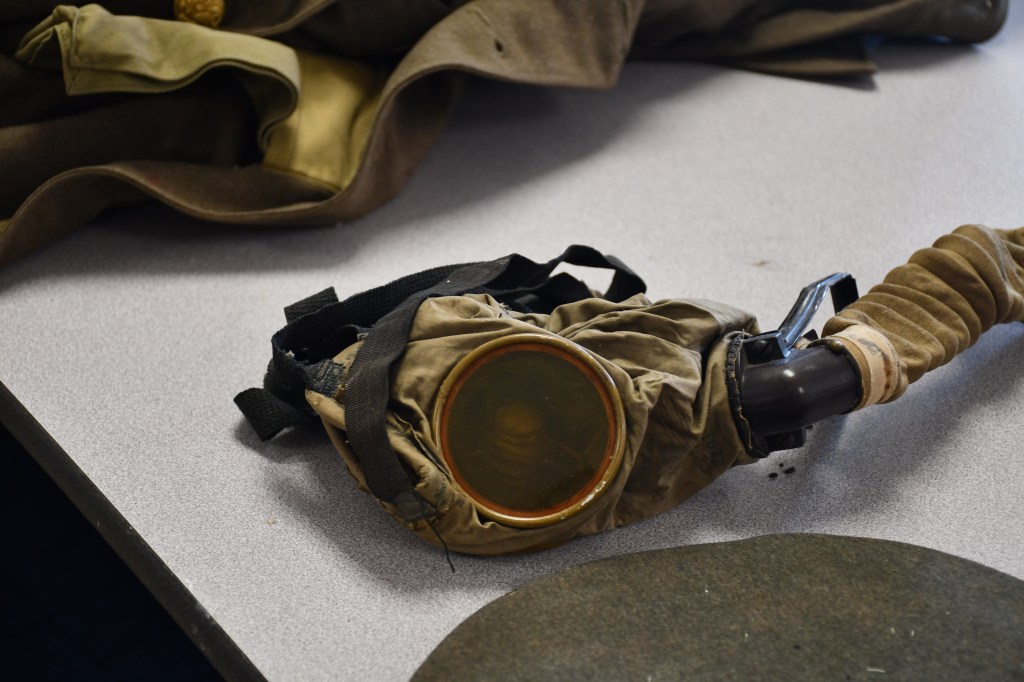 Some items from the find, such as the gas mask seen above, where damaged during its six-decade stay in the cubby hole. - Photo by Waren Taylor.

The discovery of a treasure trove of historical artifacts at Campbell Junior High School last Tuesday quickly beget the question of exactly how they ended up in a forgotten hole hidden by a shelf in a closet.

As it turns, a booklet found with the other artifacts quickly shed light on a six-decade old mystery.

In the mid-1960s, when RDC was the newly opened George Rogers Clark High School, history teacher Robert Campbell–the junior high’s namesake–started a history club for his students that quickly swelled in rank and produced a true novelty–a student-run museum.

According to the booklet, the museum was housed in the school’s B-wing and contained clothes, books and other items of significant historical interest donated by members of the community.

“He was the best teacher I had in my life,” Banks said about Mr. Campbell. “He made history come alive and we were so interested that we started the history club, and he asked us to bring in any artifacts that we had [for the museum].”

Banks said that her contribution was a crystal eye-wash contraption.

In her opinion, the museum was truly something to behold.

“We had display cases,” Banks said. “We had things on the walls.”

Banks graduated in 1966 and never heard about the fate of the museum, something that other GRC alumni of the era wondered about as well.

Mr. Campbell never forgot about the museum when it was disbanded either and spent the rest of his life trying to recall where the collection went.

Sandy Stults, the director of The Bluegrass Heritage Museum in Winchester, is a former GRC teacher and recalled helping Campbell try to locate the artifacts during the 2000s.

During her career as a teacher, Stults said she walked by the closet “a million times” and never once thought that was where the artifacts were.

“I just thought they stored equipment in there,” Stults said.

Now Stults is helping catalog and process the artifacts at the request of the school district.

“We are going through it piece by piece,” Stults said. “We are indexing it and then we are putting it in archival paper.”

Some of the artifacts spent the last 60 years protected by saran wrap and other pieces need a good dusting before they are processed.

The hidden cubby hole kept the artifacts out of extreme cold and heat, and the dry air inside prevented moisture from accumulating on them, ensuring that most items stayed in good shape even though some artifacts are damaged.

Stults said that Mr. Campbell would be thrilled about the discovery and that it is the find of a lifetime.

“This is one of the best things we’ve found,” she said.

So what will happen to the artifacts once they are processed?

“We are going to get a committee together–obviously from the Heritage Museum and RDC. We want our food service staff to have a say since they were the ones who had the find. Colonel [Jerry]Cecil and the local veterans council will also have a say,” said Superintendent Molly McComas.

The superintendent said that the artifacts may be staged as a traveling exhibit or may be turned over to a group, but that decision will rest with the committee.

Whatever happens to the artifacts, the hidden history found last Election Day will surely connect the past to the present, and serve as a reminder that one never knows what might be lurking in an ordinary closet.