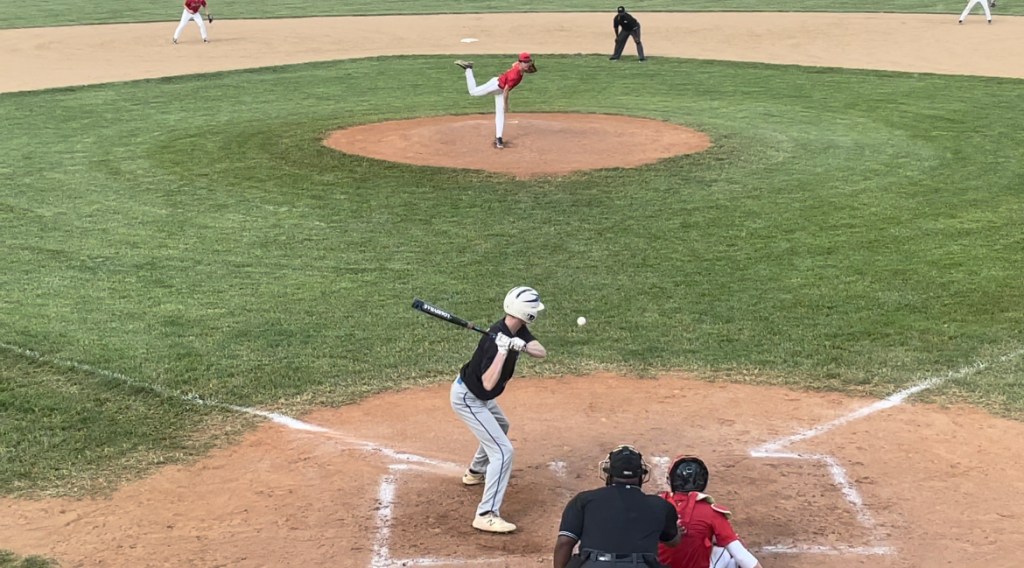 Preparing to face a no. 1 seed, many teams might feel a sense of intimidation, but perhaps not one clicking on all cylinders.

Thanks to a complete game pitched by Lochlan Hansel and timely hitting and base-running the George Rogers Clark Cardinals took down the top seeded Nicholas County Blue Jackets, 7-1, in the  10th Region semifinals win over on Wednesday night in Harrison County.

The victory set the Cards (21-13 up to play Campbell County Camels (22-1) on Thursday evening in the 10th Region Championship game, with the winner moving on to play in the 2022 Clark’s Pump-and-Shop State Baseball Tournament. “If our kids are focused and they want to play and they’re into it, we’re a pretty good team,” GRC Head Coach Chris Varney said. “You could see it in batting practice the focus [was] there.”

The Cardinals were able to get their first two men on base and eventually scored when a sacrifice fly from Nick Huff brought home Brady Davis for the game’s first run.

In the top of the second inning, Nicholas County (23-10) answered with an RBI double from Oscar Saucedo to temporarily tie the game at 1.

However, that was as close as the Blue Jackets came to taking the lead.

Hansel, pitching for the second consecutive outing, threw seven full innings while allowing only five hits and striking out three batters, as Nicholas County struggled to find their way on base.

“My mindset was just to use my speed and blow it by them,” Hansel said. “[Monday] wasn’t my best, but I came out and really proved myself. That’s what baseball is all about.”

In the bottom half of the second, the Cards looked to be in trouble when Grayson Gough was caught in a run down. However, a slide around the second baseman helped put him in scoring position. Ben Dawalt was then able to deliver an RBI single to give the Cards a lead they wouldn’t relinquish.

Before a rain delay temporarily paused play, the Cards put the game out of reach with a five-run fourth inning, powered largely by Tanner Walton’s bases-loaded single that brought home two runners.

“In my mind, I was just thinking to not let it hit the catcher’s glove behind me,” Walton said. “The fight coming back [against Mason County], I think that gave us a lot of momentum coming into this game and playing a really good team.”

In addition to offensive exploits with the bats, the Cards were able to make the best of their base-running capabilities.

Not only did Gough pull off a  nifty slide, but a designed run-down play featuring Caden Spicer led to Walton scoring from third base. Carter Maynard and Spencer Stocker were able to score on wild pitches as well.

Stocker, whose critical steals of both second and third base in Monday’s contest led to tying the score with the Cardinals down to their last out, has been frequently used as a courtesy runner during the year.

“I told him on the bus on the way home that there were a lot of guys that helped us win the game but he won the game for us,” Varney said. “Super job by Spencer Stocker. [He] saved our season.”