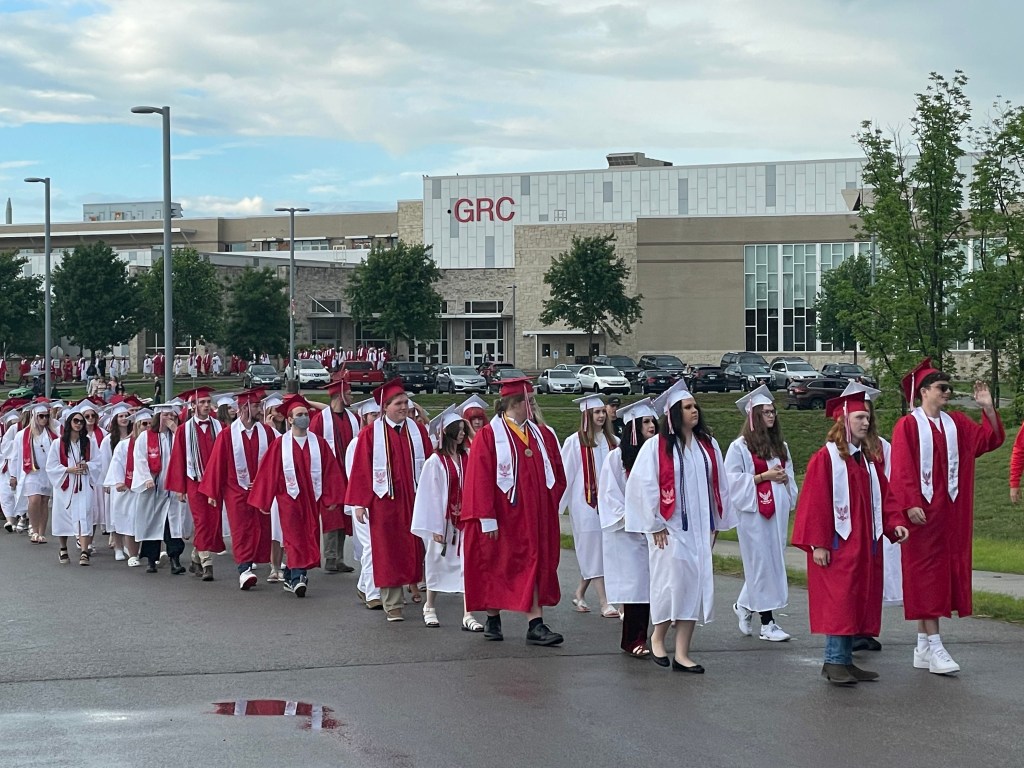 The GRC Class of 2022 exits the high school for the final time. - Photo by Matt Cizek

A rainy Friday might have seemed troublesome for the 2022 graduates of George Rogers Clark High School, but as they had during a four-year period that included a global pandemic and social upheval, the graduates took it all in stride.

Following a short rain delay, nearly 400 graduates walked across the stage in front of a packed Cardinal Stadium to their receive diplomas on their last official day as high school students.

GRC Principal Jamie Keene offered some succinct advice for those taking part in the celebration.

“Take advantage of every opportunity given,” he said.

After opening with the presentation of colors from the JROTC program and the playing of the national anthem by the GRC band and orchestra, the graduates took their seats.

First up, salutatorian Hannah Grace Craig addressed the crowd. Craig noted that, while not the only class to do so, the graduates had overcome challenges that few classes have faced.

“Let us not forget we survived a global pandemic. Through all of it, we persevered,” she said.

Noting individual differences, Craig also added,“By definition, success is the accomplishment of a goal – [it] looks different for everyone.”

Afterward, class valedictorian Emily Comer talked about much of the growth students have seen during the past four years through their in-class experiences.

“There are seniors who have literally learned how to draw blood, [and] athletes who have won incredible awards,” Comer stated. “I am beyond excited to see what all of us will do with our careers.”

As Dr. Keene and Clark Community Public Schools Superintendent Molly McComas handed out well-earned diplomas – with Cardinal Scholars who graduated with a cumulative GPA of 3.75 or higher through seven semesters being mentioned and numerous celebrations erupting from the crowd for different graduates – students were able to stay entertained by tossing beach balls throughout the crowd during downtimes in between.

Once the final name had been mentioned, the ceremonial moving of the tassel from right to left occurred, ushering the Class of 2022 onto the next phase of their lives as adults

Though no longer students, their time spent at George Rogers Clark High School is sure to remain memorable.

“My time as a Cardinal is one I will cherish forever,” said Craig.