‘The last full measure of devotion’: Winchester honors those who have fallen on Memorial Day 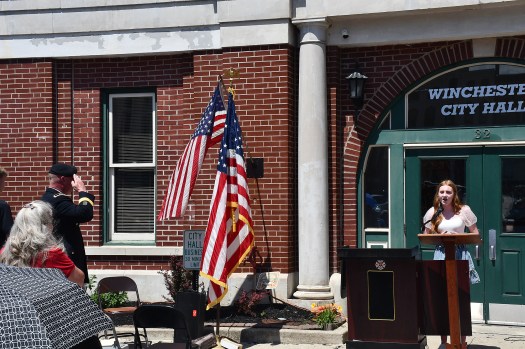 Mallory Jones sings the national anthem during the ceremony. - Photo by Warren Taylor 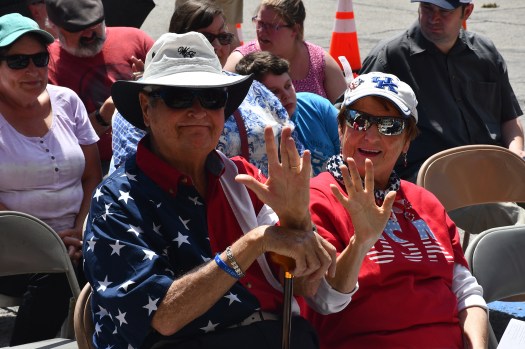 A friendly smile and wave from some attendees i their finest patriotic garb! - Photo by Warren Taylor. 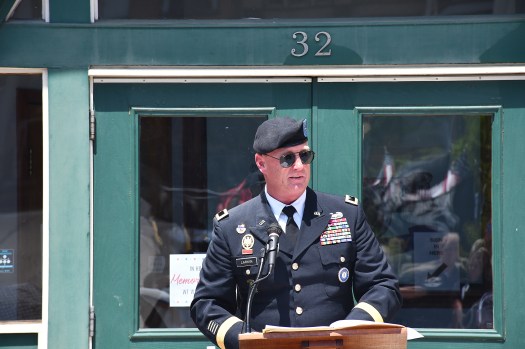 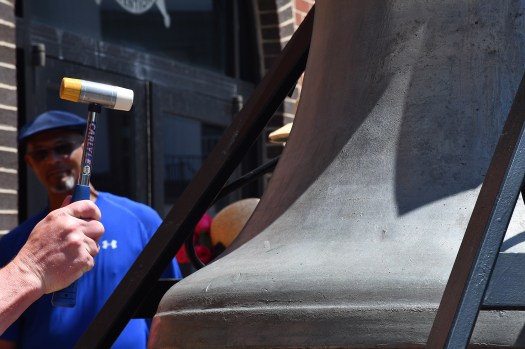 The memorial bell rang 118 times during the ceremony. - Photo by Warren Taylor.

Winchester honored its native sons who fell during active combat on Monday.

The memorial bell was rung 118 times to honor each Clark County life lost since World War I during a Memorial Day ceremony outside of Winchester City Hall as local scouts read each name aloud.

The long-serving mayor, and former U.S. Marine Corps member, spoke about the first Clark Countian, George William Scott, who died during the Japanese attack on Pearl Harbor in 1941. According the Sun article that Burtner read from, Scott enlisted in the U.S. Navy in 1937 and served as a storekeeper-second class on the USS West Virginia. The story made note that Scott’s mother received a Christmas card from her son just two days before the attack.

“I’ve often said that the people that suffer the most for those that serve in the military are the mothers,” Burtner said.

After the mayor’s remarks, State Sen. Ralph Alvarado led the assembly in prayer and then U.S. Army veteran Roy Hudson led a recitation of the U.S. Pledge of Allegiance.

Mallory Jones followed with a singing of the national anthem. Later in the ceremony, Perri G. Wilson serenaded the crowd with “God Bless America”.

Larry Hall of Rolling Thunder Kentucky Chapter 5 spoke about the history of Memorial Day and the efforts to identify and bring home the remains of service members still listed as missing in action or as prisoners of war.

“Since the days of the [American] Revolution more than 23 million American solider, sailors, airmen, marines, coast guardsmen, militia members and national guardsmen have perished in defense of this nation,” Larkin said.

The brigadier general remarked that over 43,000 Kentuckians have perished in armed conflict.

“President John F, Kennedy said, ‘A nation reveals itself not only by the men it produces but also by the men it honors and remembers.’ Today is their day. It is Memorial Day,” Larkin said.

He said that on Memorial Day that Americans mourn with those families who lost loved ones in war and honor those same lives lost; a commitment to never forget them or their sacrifice with mementos like flags and flowers.

“It is fitting that our nation chooses the last Monday of May as Memorial Day since this day marks the beginning of summer. What could be a more fitting tribute to the men and women who died in service to their country then by giving them gifts during a season filled with warmth and light,” Larkin said.

After the bell was rung, veteran Tom Hunter of the U.S. Army played “Taps”. Navy veteran William Newell closed the ceremony with a prayer.