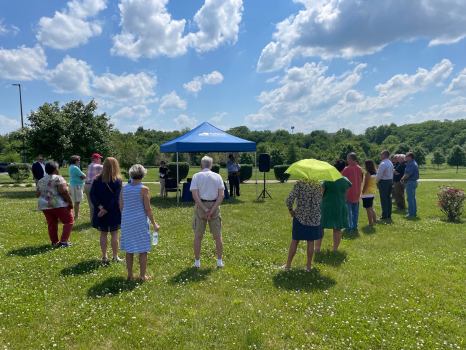 A tree and a scholarship will honor the memory of beloved local public servant, the late Todd Denham. - Photo by Matt Cizek. 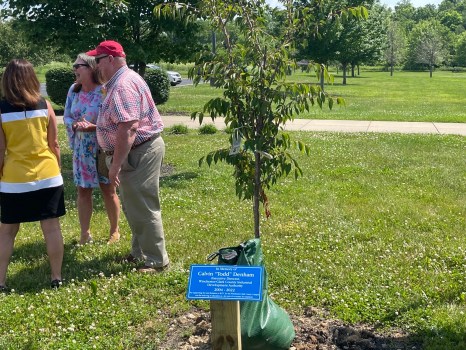 BCTC Campus Director Bruce Manley joked that Denham would have enjoyed the tree since he spent so much of his time on the golf course among them. - Photo by Matt Cizek

When longtime public servant and director of the Winchester Clark-County Industrial Authority Todd Denham passed away from cancer this April, many within the community felt something should be done in his honor.

At Bluegrass Community and Technical College Tuesday afternoon that something was accomplished.

A small but intimate crowd gathered in his memory as a cherry accolade tree, ornamented with a coral pink shade and shell shaped blossoms, was planted outside of the school along with a plaque honoring Denham.

“Todd was a true champion for this community,” said City Commissioner JoEllen Reed. “His legacy will forever be with us.”

The tree is one of the first to bloom during the spring season.

Yet, that was not the only honor given in Denham’s name.

During his time serving the community, Denham played a key role in helping develop the downtown Winchester area.  He also sought to further improve BCTC, and had a vision for installing and enhancing programs that would benefit others.

“Todd was such a big part of why we have BCTC here that it just made sense to honor him,” said BCTC Campus Director Bruce Manley. “I’m so happy to announce that we have a scholarship named for him as well, and that will continue to benefit students just as he did when he was here with us.”

That scholarship, the Todd Denham Memorial Scholarship, will annually award $2,500 to an incoming student with a GPA of 3.5 or higher, who is also a Clark County resident and in financial need.

The vision is in line with Denham’s, which was that education is key and essential to impacting economic development in a positive way.

“When we have the scholarship and we’re helping students get back to school, we’re helping to better this community and that’s part of economic growth,” Manley added. “For him to still be doing his job after he’s gone, I think means a lot.

In a testament to his character, Denham–while appreciative–might have even found some humor in the situation as well.

“He would probably want people to go away laughing. He played golf in the trees, and there’s no better way to honor him than planting a tree,” said Manley.

For those who wish to donate the Todd Denham Memorial Scholarship, please contact Bruce.manley@kctcs.edu.