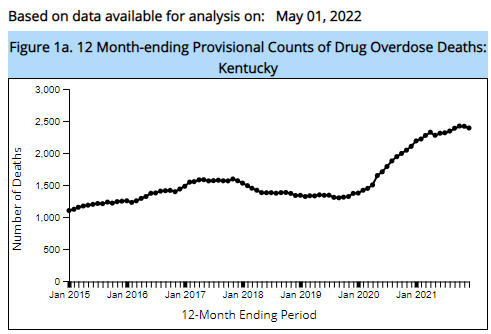 Drug-overdose deaths in Kentucky rose 13.55% in 2021, according to a recent federal report.

The preliminary data from the Centers for Disease Control and Prevention shows Kentucky had 2,391 overdose deaths in 2021, up from 2,104 in 2020.

After having the second highest rate of increase among the states in last year’s preliminary report, 54%, 2021’s much lower increase puts Kentucky near the midpoint of the rankings, at 22nd lowest and below the national estimated increase of 14.9%.

Like the rest of the nation, the new data show overdose deaths involving opioids and synthetic opoids increased between 2020 and 2021.

A separate analysis done by the University of Kentucky found that the rate of drug-overdose deaths among African Americans in Kentucky more than doubled from 2016 and 2020.

The study, published in the journal Public Health Reports, shows that about 80% of drug-overdose deaths among all racial and ethnic groups in Kentucky involved opioids.

“Historically, opioid-overdose death rates have been disproportionately higher among white individuals, but the new study shows that the rates for both white and Black individuals in Kentucky are now nearly the same,” Svetla Slavova, study co-author and associate professor in the UK College of Public Health, said in a news release. “This reflects national data, which show that disparities in opioid overdose deaths continue to worsen for Black people.”

Slavova is part of UK’s HEALing Communities Study research team that conducted the study and a faculty member in the Kentucky Injury Prevention and Research Center.

The researchers conclude that their findings “underscore the urgent need to expand treatment and harm reduction services to non-Hispanic Black residents with substance-use disorder.”

“Black Kentuckians who are at risk for drug overdose may face additional barriers to accessing treatment,” Sharon Walsh, principal investigator for the study and director of UK’s Center on Drug and Alcohol Research, said in the release. “This study underscores the importance of our efforts to expand treatment and harm reduction services in Kentucky’s communities of color.”

One of the study’s goals is to create culturally tailored interventions and partnerships with community organizations to better engage people in communities of color with evidence-based practices to reduce opioid overdose, including increasing access to and treatment with approved medications for opioid-use disorder, such as buprenorphine and methadone. It also includes education about overdoses and distribution of naloxone, a life-saving medication that rapidly reverses an opioid overdose.

People who are struggling with drug abuse or who are concerned about a family member’s substance use can search for treatment providers at www.findhelpnowky.org.