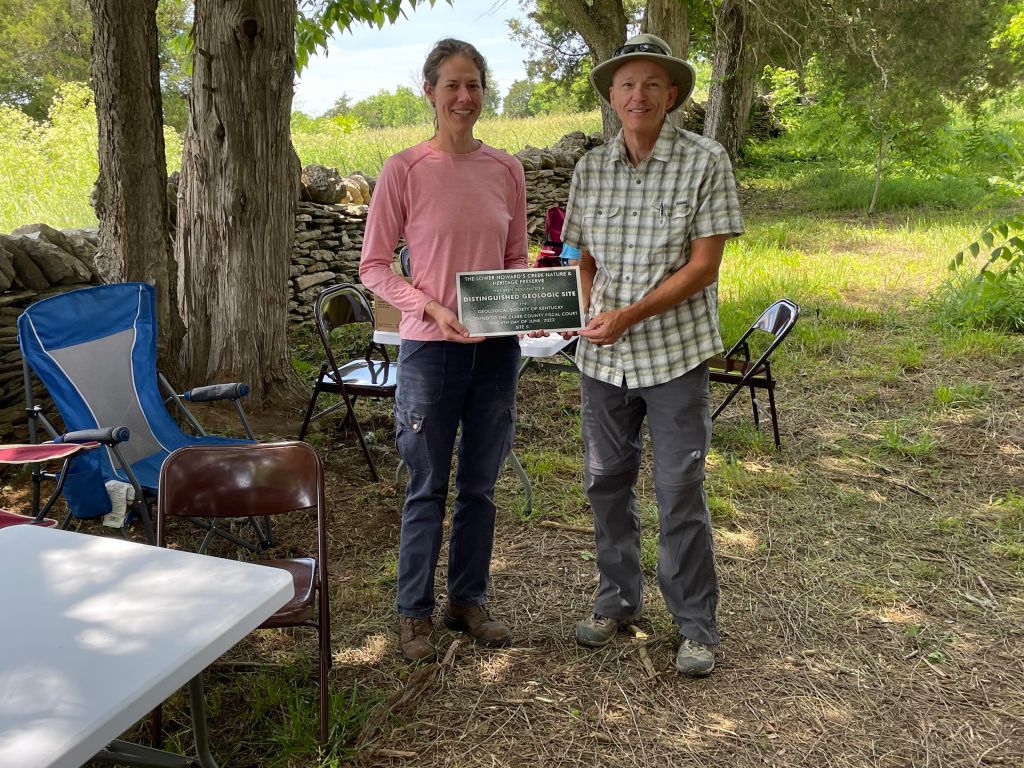 The preserve at Lower Howard's Creek received a rare distinction from the Geological Society of Kentucky on Sautrday. - Photo by Matt Cizek.

For years only four sites in Kentucky were considered distinguished by the Geological Society of Kentucky, but after this weekend there are five and the lastest is in Clark County.

Lower Howard’s Creek Nature and Heritage Preserve, which is located off of Athens Boonesboro Road, was awarded the distinction in a ceremony Saturday.

“What we’re looking for is a site that has human cultural value, geologic value, a site that is public, and a site that can be easily accessed,” said Dr. Frank R. Ettensohn, prrofessor of geology at the University of Kentucky and past president of the GSK.

Originally scheduled to take place in 2020 prior to COVID, the ceremony honors an area full of scientific artifacts.

At Lower Howard’s Creek Nature and Heritage Preserve, explorers can find fossils, sedimentary structures, and much more–often with the guidance of professional geographers as they walk along John Holder Trail, measuring approximately two and a half miles long.

Tufa waterfalls, which are formed when water that runs over dolomite rock absorbs calcium, are also found.

“It is interesting to see the different types of rocks,” said Karis Pumphrey, the manager of Lower Howard’s Creek Nature and Heritage Preserve. “One type of rock is different than another one 300 feet down to the creek. How they’re used greatly differs.”

The area also has historical relevance.

In the late 1770’s, pioneers came through the location after leaving Fort Boonesboro.

“They started migrating this way … We know definitely that they started traveling up to lower Blue Licks to find salt in 1778,” Pumphrey said. “We know through historical documents that this was highly populated for that time.”

Along the trail route, one can walk along a suspension bridge and discover an area where up to 15 different mills and distilleries were once located – with remaining remnants connecting Winchester’s past to its present.

“The dam that went across Lower Howard’s Creek had sort of a gate in the middle, so they could lock up the water and then the water behind it would be blocked,” said Richard Smath, a retired geologist for the Kentucky Geological Survey who is currently serving as a counselor-at-large for the GSK. “The people from Winchester would come and bring down their corn, wheat, or whatever [they had and] load it down onto flat boats. When it was full, they would raise the center gate, and the water would push the flat boats to the various grist mills or wherever they needed to go.”

The GSK is separate from the University of Kentucky, accepts science teachers and most anyone with an interest in the field of geology.

The John Holder Trail at Lower Howard’s Creek Nature and Heritage Preserve is open to the general public on Tuesdays and Thursdays from 9:00 am to 1:00 pm.

For information regarding guided hikes at Lower Howard’s Creek Nature and Heritage Preserve, please check the Facebook page by the same name or go to https://www.lowerhowardscreek.org/index.html.

Lower Howard’s Creek Nature and Heritage Preserve asks that individuals not trespass onto the central part of the preserve from John Holder Trail.