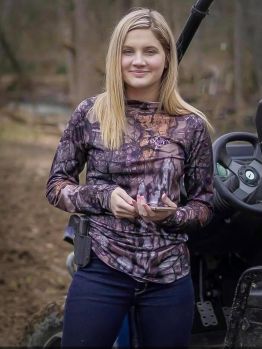 21-year-old Kayla Lacy, a server at Woody's Bar and Grill in Winchester, was paralyzed in a swimming accident over Memorial Day weekend. - Submitted photo. 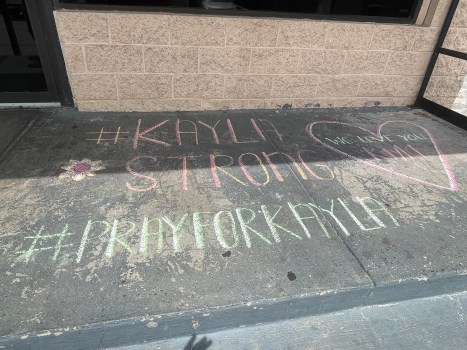 Chalk art outside of Woody's expressing support for one of its own. - Photo by Matt Cizek.

Life can change in the blink of an eye and such is the case for a Powell County woman with Winchester connections.

Kayla Lacy, 21, was left paralyzed from the neck down in a diving accident on Monday, May 30. As of this weekend, she continues battling in the hospital–where, following surgery, events continue to change day by day.

“She was with some friends, and jumped into the shallow part of the pool,” said Pam Tipton, Kayla’s aunt. “She shattered the C5 vertebrae in her neck, and she knew that she couldn’t move. That’s when the people that [saw] her got her out of the pool.”

In the aftermath, many businesses from Winchester started taking action to provide support for Lacy.

When they heard about the accident, the staff at Woody’s Sports Bar and Grill–where Lacy was scheduled to return to work on Tuesday as she continued her classes at cosmetology school–was among them.

“Myself and two of the other girls went around [to other businesses] with donation buckets,” said Abby Moore, manager of Woody’s Sports Bar and Grill. “Kayla’s just a ray of sunshine. She’s probably one of the sweetest people you’ll ever meet. We’re just trying to do everything we can to support her.”

Among the other businesses taking steps toward supporting Lacy through donation buckets are Abettor Brewing Company, La Trattoria, Hall’s on the River, and golf courses around the community.

In addition, a GoFundMe page titled “Medical Bills and Other Expenses” has raised nearly $8,000 dollars to date, while a hashtag, #kaylastrong, has been shared online and t-shirts bearing the slogan have been sold.

Future fundraisers that have been discussed include a kickball and cornhole tournament, and a benefit concert by Rifletown.

A girl of diverse interests, Kayla’s story has inspired prayer and action from around the globe, including countries such as South Africa and Saudi Arabia.

“This young lady was a female hunter that touched people all over this nation,” said her father, Lonnie Morgan. “She’s fighting hard for her life right now.