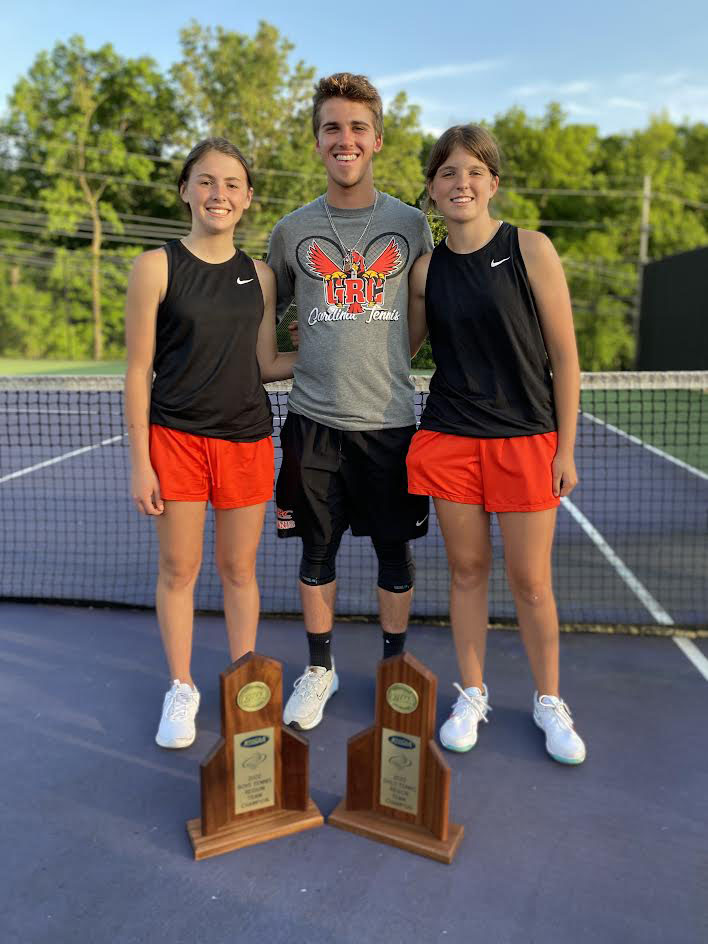 The state tournament trio will form the nucelus of next year's GRC tennis squad. - Submitted photo.

While their seasons would come to an end, the story behind their success is as notable as the success itself.

For Prater, who took a supplemental year following COVID, his high school playing days got off to a rocky start.

After tearing his ACL freshman year and having COVID cancel his would-be sophomore year, Prater finally seemed on the verge of returning to athletics.

However, the fall would trouble Prater, a two-sport athlete who also plays goalie for the school’s soccer team.

“On the third day of tryouts I got hit from behind, tore my ACL and meniscus again,” said Prater. “That was probably one of the toughest points of my life because I’d come to the point where I’d worked so hard to get through all of that, it just [happening] again felt like a total reset.”

Nevertheless, following recovery, Prater has played tennis to the tune of having appeared in the state tournament not just this year, but the two seasons prior as well.

This came despite many individuals having their own reservations regarding whether or not the junior standout could return to his full potential.

“The doctors told me there’s no way you should be able to play with a torn ACL and meniscus. My [motivation] wasn’t really proving that I could, but that something that couldn’t be done could be done,” Prater said. “Even though it was painful at the time, I’m thankful looking back because of the way it drove me to push harder and I’ve become strong in my faith and with my family.”

In doubles play, the team of Lowe and Settles certainly played like an experienced squad.

However, evidence points to quite the contrary, as the two are relative newcomers to the game.

“Last year, Cassi started going to the country club with Madelyn, and they got tired of just swimming so they started playing tennis,” said Jenni Lowe, mother of Cassi. “Cassi loved it and wanted to join the team this year, but was kind of hesitant because she didn’t know anybody.”

Needless to say, Settles soon came on board.

“We didn’t have that many expectations,” said Settles. “We were just trying to do it for fun.”

The fact that the two are lifelong friends helped out as well.

“Playing soccer and basketball together, we know each other so well,” said Cassi Lowe. “It’s really helped with our chemistry.”

The girls took the 10th Region by storm and surprise, rising to a no. 1 seed and defeating Montgomery County’s team in the final match-up en route to playing in the state tournament.

With perhaps the most promising advantage being that all three competitors return to Winchester for next season, GRC tennis coach Seth Heinss reflected positively on this past year’s experience.

“Tennyson played exceptionally hard, battling back from injuries. I still think about his region semi-final match and how cleanly he beat the 3 seed. That was the best I had seen him play,” he said. “Cassi and Madelyn were the surprise of the season. It was a privilege to watch them progress from beginners in tennis to region champions. What a ride!”