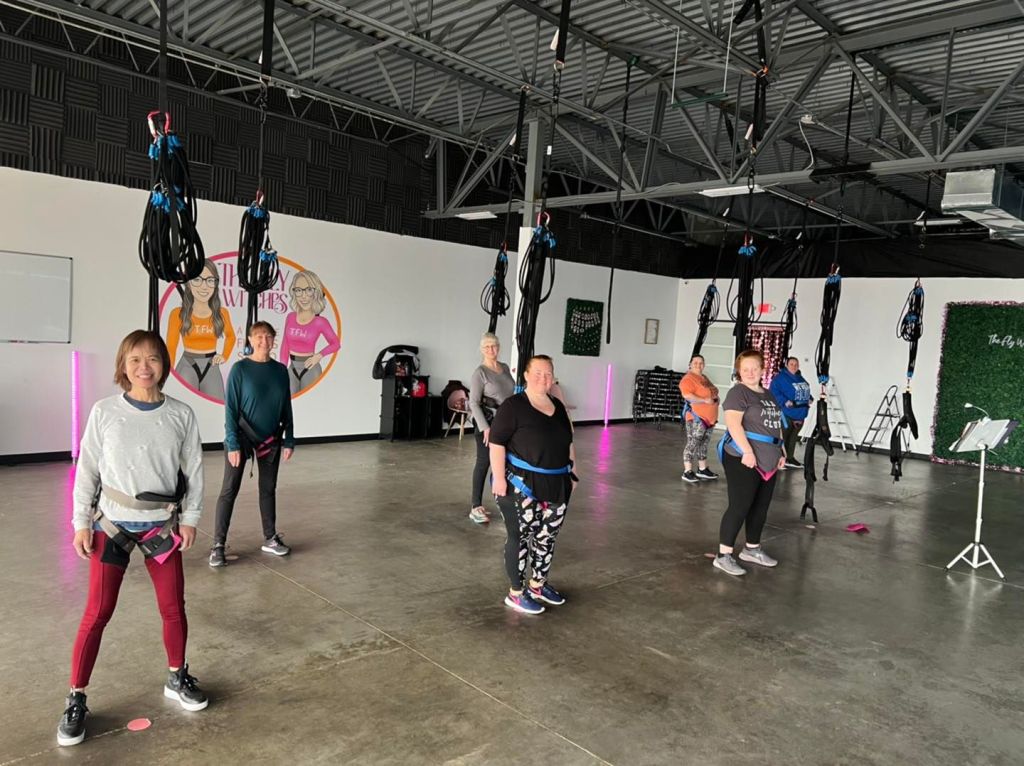 With a name inspired by an old song and a fitness concept for the modern world, The Fly Witches might just be one of the most interesting places in Winchester, and now the bungee fitness studio is celebrating its first anniversary.

Originally inspired by Tiktok videos that displayed bungee fitness, the studio was opened by owner Callie Thornton and studio manager Becca Bingamon, and just prior to starting the training process in Oklahoma, the studio got its name.

“Right before my grandma passed away unexpectedly,” said Thornton. “She loved the song ‘Witchy Woman’ by The Eagles. Right away I thought, ‘Let’s do the Fly Witches.’ I get to think of her every day when I come in here,” Thornton said

When the studio opened last June it was the first of its kind in Kentucky as far as Thornton knows.

“We’re the only studio in central Kentucky that offers bungee,” she said. “Since we’ve opened, there’s been a few more opened in northern Kentucky.”

Bungee fitness is designed to combine cardio while continually making the process easy on a user’s joints. The studio offers group classes that can include up to eight individuals at one time. It also offers bounce classes and POUND classes – combining cardio, strength training, and drumming – and is the only location in Winchester where both activities can be found under one roof.

Though initially marketed with women’s health in mind, the studio has seen a diverse growth in population.

“We’ve had a few men come in and try. We currently have a gentleman that just joined us for probably the long term,” Thornton noted. “We understand the stigma that comes along [with] just being a woman in today’s society we really wanted to cultivate an environment [where] no matter where you are in your fitness journey, you feel welcome here.”

With an eye on the future, the studio has room to grow in the future.

“We’ve thrown around an idea of opening another studio or franchising, or possibly bringing other types of exercises here to our existing studio,” Thornton said.

As a part of its birthday celebration on June 26, The Fly Witches will offer a new client journey from 11am to noon along with classes taking place between noon and 3. Food trucks will be present during the same hours. More details to be announced soon.

The studio is located at 252 Redwing Dr. For more information visit the its website, www.theflywitchesbungee.com.