Scherr ready to get going in blue and white 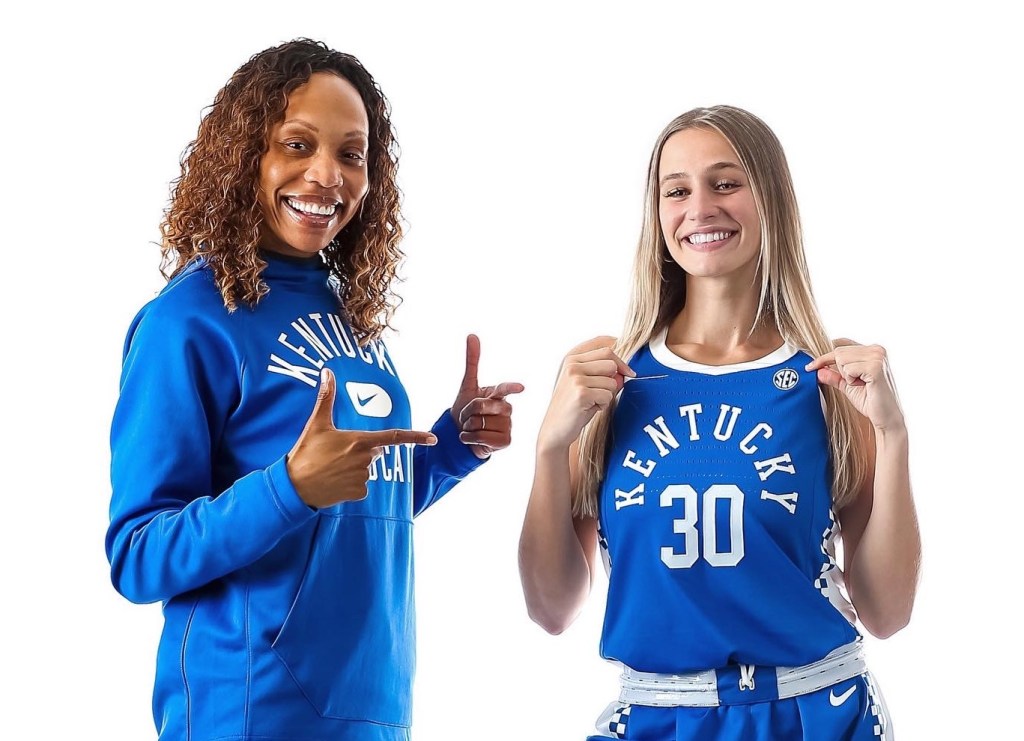 Scherr, a five-star recruit, signed with Oregon but is now transferring to Kentucky for her junior season and no one is happier than Jenkins.

“She is a good player. She is super energetic and works so hard all the time,” said Jenkins, the Anderson County star who is also joining coach Kyra Elzy’s team at UK. “When I heard she was transferred, I was hoping she would commit to Kentucky.”

Scherr liked having Jenkins call her “energetic” because that’s the type of play she tries to provide.

“I always wanted to be the hardest working player on the floor. That’s something I take pride in,” Scherr said. “My mindset has always been whatever the team needs. If it is scoring 30 points or 10 points, I’ll do it and hopefully we get the win.”

Scherr was a two-time Gatorade Player of the Year in Kentucky, a McDonald’s All-American in 2019 and led Ryle to the 2019 state championship. She scored over 2,300 points and 1,000 rebounds in high school and also had nearly 700 assists and 550 steals. She is Ryle’s all-time leader in points, rebounds and assists.

She averaged 4.7 points, 3.7 rebounds and 3.3 assists at Oregon last year when she started 28 games and shot 33 percent from 3-point range. She played in 53 games in her two seasons at Oregon.

She seriously considered Kentucky coming out of high school but has no regrets about going to Oregon.

“I grew as a person and player a lot. There were definitely some obstacles and trials but now it is about what I want in a program. I know coach (Kyra) Elzy pretty well and she wanted me to come to Kentucky before. I went away for two years, tried it out, figured out what I needed and now I am at Kentucky.”

For those who have not seen Scherr play the last two seasons, she says the biggest change is her knowledge thanks to two years of experience against elite college competition.

“i grew so much from my freshman to sophomore year learning the system and balancing my lifestyle. College is so different and basketball is like a job,” she said.

But why Kentucky this time when an experienced transfer has a lot of options?

“Obviously it always felt like home,” she said. “Coach Elzy and her staff are doing something special and something I want to be part of. At Oregon I had a lot of elite teammates coming in with me and it was a super top tier program. Now it is exciting to be part of building something new and I am looking forward to that,” Scherr said.

“For me and where I am at as a person and what I came from, it is a better fit for me to be at Kentucky. I truly believe in what coach Elzy is doing. There are a lot of good things to come.”

There certainly are a lot of “new” pieces coming to Kentucky. Scherr is one of 10 newcomers on the 2022-23 UK roster counting freshmen and transfers. Scherr calls it an “interesting situation” but one numerous teams across the country deal with because of the transfer portal rules now.

“To me, it’s exciting. We don’t just have a lot of good pieces and good basketball players, but Elzy and her staff are recruiting the right players to fit the culture of the program,” Scherr said. “She was very honest with me about who she was recruiting and changing the team atmosphere and culture. Everybody on the team thinks that is important.”

“There has definitely been a lot of communication about roles,” Scherr said. “I feel like we will have good team chemistry and we’ll just all see what roles fit the team the best.”

However, she already knows UK fits her family’s travel plans a lot better. She said 8 p.m. games at Oregon meant 11 p.m. starts in Kentucky and that it was difficult for family members, especially her grandparents, to watch games. Flights from Oregon to Kentucky and back got harder and longer.

“It was not something I couldn’t do and was not the full reason I left Oregon,” she said. “But I did want to be closer to family and now they can drive to see me play at a school I already know I love.”