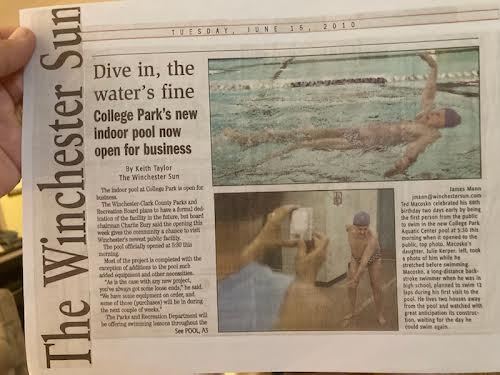 Editor’s note: Friday, the 17th, would have been Mr. Macosko’s 100th birthday.

In the last few years of his life Winchester resident Ted Macosko would regularly leave his apartment on Wheeler Ave. near College Park and then travel to the pool at the recreation center operated by the Winchester Parks Department.

He was the first person to take a dip in the pool when it opened to the public in June 2010 and soon became a daily fixture at the indoor aquatic center and in the process he befriended the staff, in particular the life guards.

Even before then, Macosko was known as a swimming fanatic.

“He swam from day one,” said Macosko’s daughter, Julie Kerber. “He was a big swimmer as a kid. The back stroke was his big stroke!”

Kerber said it was common for her father to be able to swim the full length of the pool without taking a breath and that he credited the activity with helping him live a long life.

“He felt that people should definitely know how to swim,” Kerber recalled.

“He was one of those guys who was a fixture here for such a long time … When he passed he wanted to do something with the money that he got from his funeral – instead of flowers – he wanted to set up a scholarship fund so to speak for kids or adults who had difficult times paying for swim lessons because he was a big advocate for swimming and health, “ said Winchester Parks and Recreation Director Jeff Lewis.

Such a thoughtful gesture deserved recognition in Lewis’ opinion.

“What he did we thought was admirable,” he said about installing a plaque to honor Macosko.

Anyone wanting to donate to the fund should get in touch with Lewis by email at wccpr.director@gmail.com.

And for anyone on the fence about learning how to swim, let Macosko’s words that he penned in a letter to his “pool buddies” persuade you to dive on into the water.

“For sure I looked forward to having some great times at the pool. However, little did I realize how back then how much good the pool would be doing for me now … It has become a lifesaver in giving me some comfort and relief.”