People you should know: the ladies of Holly Rood 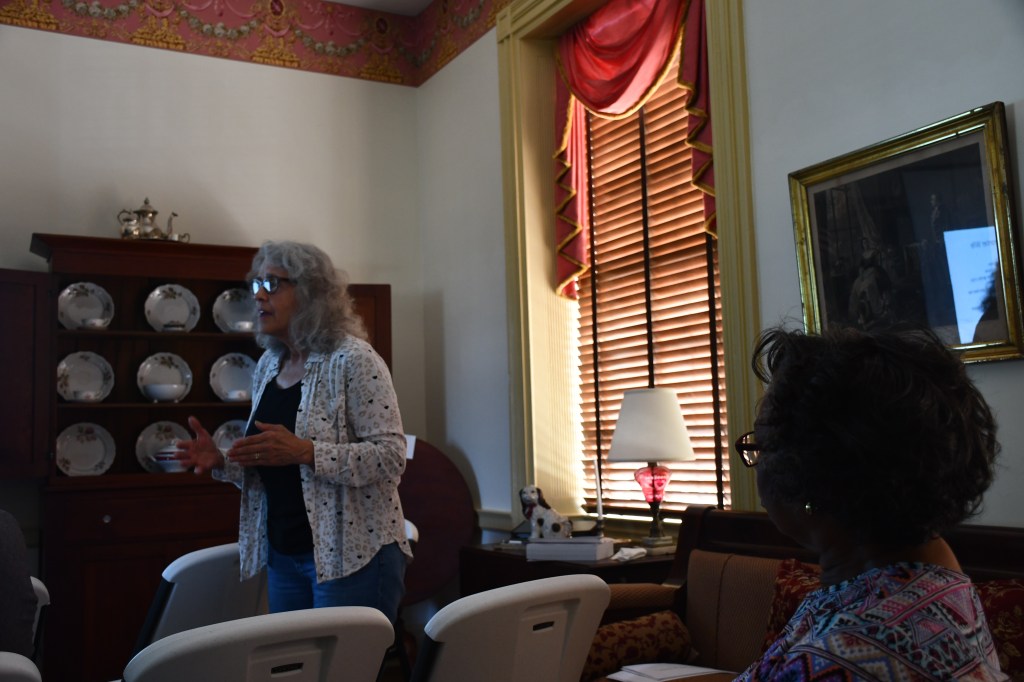 Debbie Barnes provided a look into the hardships faced by women on the American frontier and beyond during a history lecture last week at the Holly Rood estate. - Photo by Warren Taylor.

One fact is certain about the women of Holly Rood , the mansion of former Kentucky governor and county resident James Clark , life was not easy for them despite the relative wealth of the home’s inhabitants.

Debbie Barnes, the curator of the historical home on Beckner St., illuminated what life was like for women during the antebellum years in the United States during a recent talk about the ladies of the estate.

“The whole time that this house has been here was an uncertain time,” said Barnes during the introduction to her presentation.

In the early days of the mansion and its surrounding farm, Kentucky was on the frontier of the fledgling American republic. Meaning that life was not easy for the ladies living on the backwater of society, including for Clark’s first wife, Susannah.

“We imagine that she sat here and everybody waited on her. That is what we think, but it would not be true,” Barnes said.

Life in the early days of the farm was physically demanding for Susannah. She often worked outside and even tasks like cleaning clothes or fetching water from the well were laborious.

“Even going to the bathroom was hard. The privy was quite a distance from the house,” Barnes said.

Women during the 1800s had few legal rights. Upon marriage any property or money a woman had became part of her husband’s estate and if he died she was appointed a guardian since property and expenses were considered the dominion of men at the time.

“In other words he took complete control of everything,” Barnes said. “We’ve seen so many records of a woman writing letters begging the court to have the executor of the estate give her money for the children: for shoes and for food. If the court pleased, I supposed they did. And if the court did not please, I suppose they did not.”

Susannah and after she passed away, Margaret Clark, did not do all of the work on the estate alone, they had help from several enslaved woman.

“The life of an enslaved woman, we could not imagine how hard it was,” Barnes said. “Not only did you have to put up with what everyone else did but you did not know from one day to another what was going to happen to you or the man that you loved – who was not allowed to be called your husband at that time – or your children.

In addition to helping out with the domestic chores, enslaved women could been rented out as hired help and any money they made went into their owner’s pockets.

Clothing, medical and nutritional needs for the known seven enslaved women and their families who resided on the farm during the early days of Holly Rood were entirely at the discretion of their owner.

Despite the hardships, the women of Holly Rood succeeded in making the estate a thriving one and in the process their hard work makes their history worth knowing.