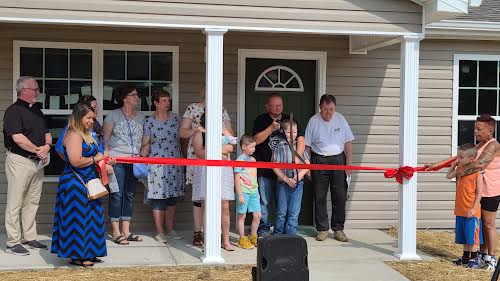 The Rogers family of Winchester cuts the ribbon on their brand new house! - Photo by Warren Taylor.

Andy and Ken Rogers got the keys to their new home on Lincoln Street on Saturday morning in front a crowd of friends, family and supporters.

The Rogers and their three children – Kenneth, Nikolas and Railynn – are the latest Winchester family to move into a home in the neighborhood that is currently seeing revitalization thanks to a partnership between the city of Winchester and Habitat for Humanity of Madison and Clark Counties.

Amanda Dube’, the organization’s interim executive director, reminded those in attendance that the Rogers were not simply given a home.

“They planned for this day to position themselves to be in a good place financially to be able to look toward purchasing a Habitat home,” she said.

The family have taken on a mortgage just like a majority of American homeowners and had to put in over 350 volunteer hours at other Habitat home build sites during their time in the program.

But the Rogers willingness to go above and beyond with their “sweat equity” hours are what makes their story so remarkable.

“They have been hard workers,” Dube’ said. “This family has worked so hard that they got 350 hours of sweat equity before we broke ground … They continue to serve and they continue to help others.”

Winchester City Manager Mike Flynn served as the Rogers’ mentor as they went through Habitat’s homeownership program and has known the family for years.

“Ken worked with me at WMU (Winchester Municipal Utilities … He is a hard worker. Most of you know him from solid waste, being on that truck and being one of the guys that goes out and puts in a hard day every day. He gives it all that he has got.”

Over time Flynn befriended the entire family and invited them to come worship at the church he attends.

“I’ve seen them grow, and you can see the power prayer and God’s hand on somebody when you are committed to them. I stayed committed to these folks. I saw something different in them. They wanted something for these three little ones and stuck behind it.”

Andy Rogers, who Dube’ said had become quite the public speaker over the last few months, kept her remarks brief.

“Tell me God is good. Look at my house you all,” Rogers said. “I am very grateful for all the prayers and all the work. It takes more than people to build a home and God has been very good to us.”

There was much thanks to give.

Dube’ said that the build was possible thanks to generous community partners like aluminum manufacturer Novelis, the LG&E and KU Foundation, the Kentucky Housing Corporation and Federal Home Loan Bank.

“And, of course, even though these entities provided the chunks of money individuals just like you and churches, the generosity of all of these folks, we could not do this without the generosity and the volunteers in the community,” Dube’ said.

The Rogers received gifts from community partners and blessings from Flynn and Father Jim Trimble of Winchester’s Emmanuel Episcopal Church.