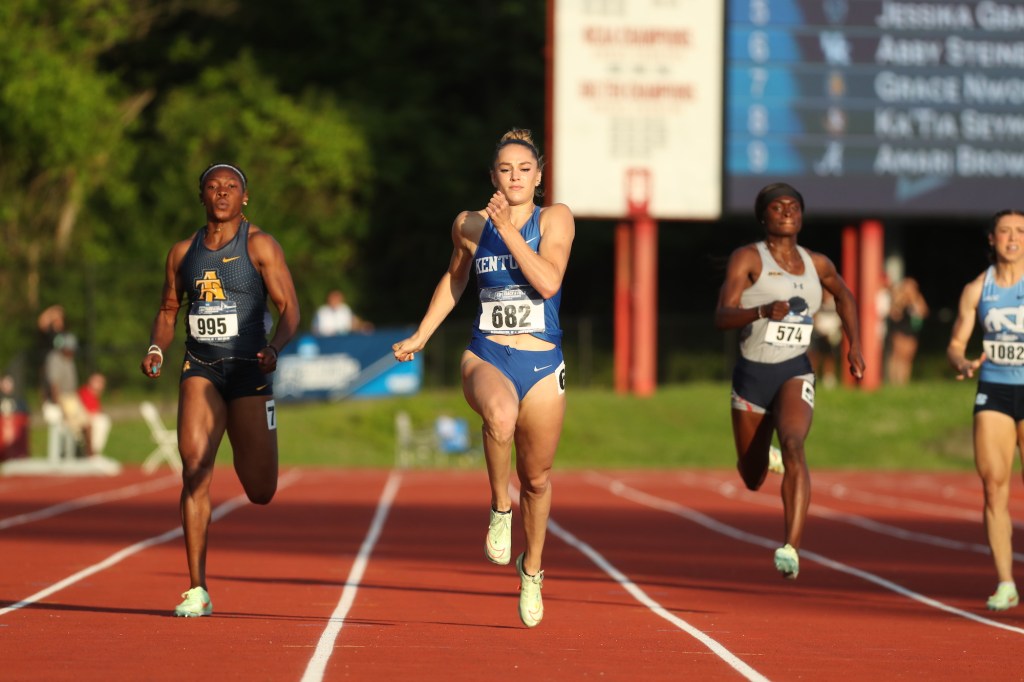 Kentucky track has produced some fantastic performers and Olympic medalists in recent years.

Sydney McLaughlin won the 400-meter hurdles at the Tokyo Olympics with a world-record time of 51.46 seconds — a mark she lowered to 51.41 Saturday at the USA Track & Field Championships — and was the first woman to break 52 seconds. She was also on the 4×400 gold medal relay team. At UK, she was national champion in the 400 hurdles in 2018.

Still, with the senior season and career that Abby Steiner just completed at UK, who had the better Kentucky career — Steiner or McLaughlin?

“It’s Abby, hands down. Abby is the one. She brings excitement. I don’t even know the words to describe her,” said Sharieffa Barksdale, senior manager of alumni relations at USA Track & Field and a former Lexington resident. “Nothing against Syd. They are clearly in two different events but Abby is unbelievable.”

Steiner was named U.S. Track &Field and Cross Country Coaches Association National Women’s Track Athlete of the Year for the second season in a row and also won the award for this year’s indoor season. She won the Honda Sports Award for Track & Field.

Steiner won the 200-meter dash at both the NCAA indoor and outdoor championships and was on the winning 4×400 team at the outdoor meet and ran her leg in a sizzling 48.92 seconds that ESPN’s Myron Medcalf called “one of the greatest performances you’ll ever see on a track..” Steiner also has the collegiate record of 21.8 seconds — eighth fastest in U.S. history — in the 200

“The reason why I say that about Abby over Syd is Abby had to overcome a lot of adversity to get where she is. She was not an immediate star and then was injured her junior season but then she jhad a sensational year,” Barksdale said.

Rose Monday was head coach of the U.S. women’s team at the Tokyo Olympics. She has not met Steiner but has followed her career closely.

“She is amazing. She definitely could be an Olympian. She is such a phenomenal sprinter,” Monday said. “She is one gifted young lady who I sense is only going to keep getting better.”

Steiner competed at the USA Track & Field Championships last week in Eugene, Ore., and won the 200 in 21.77 seconds — the best time in the world this year — to earn her first trip to the World Championships next month.

Barksdale says the transition from successful collegiate sprinter to successful professional sprinter is a lot harder than most understand.

“It is just a different ballgame between college and professional,” Barksdale said. “Mentally if you don’t have it when you go against professional athletes you may not shine in the pros like you did in college. You have to be mentally ready knowing some of those pros may have been your idols. That can be intimidating. You can lose focus. It’s a totally different game as a professional. It doesn’t always work out as easy as it did for Sydney.”

Steiner said before the meet she was confident fatigue from SEC and NCAA  meets would not impact her. After her win, she told NBC Sports, “Coming off a collegiate season, a lot of people wanted to put limitations on you that you are burnt out.”

Barksdale is confident Steiner is going to be just fine because of the way she can “shift gears” the last 15 or 20 meters of the 200 like she did at the USA Championships.

“Her arms are just pumping like crazy. That is just her. I have not seen anyone’s arm move as fast as her right arm,” Barksdale said. “Her style is not for everybody but why fix something that is not broken. She has perfected her running style and it works for her. I respect Kentucky coaches for not trying to change here. Never let anyone try to change your style of running if it is working.” 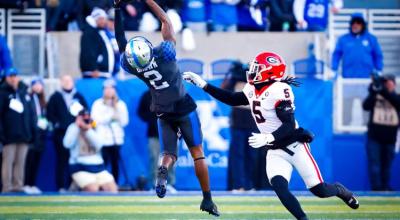 Kentucky digs deep, shows grit and determination in loss to No. 1 Georgia