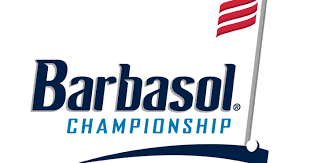 Adam Svensson felt good before stepping on the course in the opening round of the Barbasol Championship on Thursday at Champions at Keene Trace.

“I was on the range today and I was feeling really good,” he said after firing a 10-under par 62 to open the four-day PGA Tour event. “I’ve been putting well, putting a lot of work in that. It just kind of all came together today.”

Svensson made two eagles, on No. 8 and No. 15, both par fives. He also added seven birdies to his scorecard. He said the eagle on No. 8 was “exceptional” and used a 3-wood and a 6-iron. He completed an eagle with a 30-foot putt on No. 8.

“I’ve been playing well,” he said. “I had a couple (of Top 25 finishes) the last few events. I’ve always had no issues but just kind of struggled a little bit with the putter,” he said. “I’ve been working more on putting than I have ball-striking. Usually it’s the other way around for me, so just I think the extra work and the extra time spent into putting has helped my game even more than just hitting balls.”

Svensson has a two-stroke lead over Ricardo Gouveia and Robin Roussel going into Friday’s second round. Svensson wasn’t surprised by the amount of low scores in the opening round.

“I knew there was going to be a lot of low scores,” he said. “The greens were soft and they roll pretty good. There’s a lot of divots and stuff like that, you can bang them in, take some break out and stuff like that. I just go out there and try to do my best. I don’t really have a score set, I just try and play the best golf I can.”

Morehead State graduate and local favorite Josh Teater fired a 4-under-par 68 in the opening round.

“I hit it nice off the tee, had a lot of good opportunities I think from the fairway,” he said. “Didn’t hit it quite as close as I’d like. A couple nice looks at eagle on the front nine there that I didn’t think I gave the best runs.

“My putter was a little balky, but we’ll get on the green here and roll some for 10 or 15 minutes and kind of get that settled and then do it again in the morning to be ready to go. “

“It’s awesome to be here at home and playing,” he said. “As I’ve always said, I try to leave the golf here and, you know, go do other fun stuff after, like taking some guys to one of my favorite lunch spots at Dad’s favorite, and I think we’re going to go watch a comedy show tonight at the local comedy club.

“I can’t say I do that on the road very often. On the road it’s more let’s watch a movie or let’s find a place to play pickleball or something like that. Yeah, we’re just going to try to have some fun this afternoon, rest up for tomorrow.”