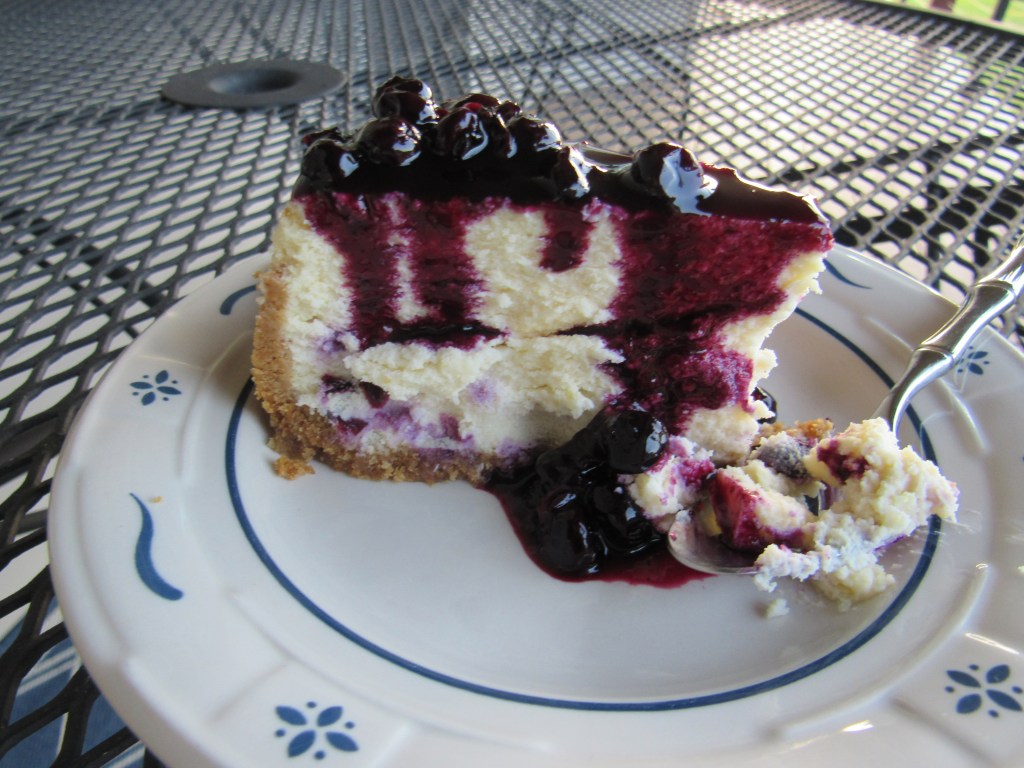 Our blueberry bushes are producing loads of blueberries again this year and I found a new way to use them – in a cheesecake. I found today’s recipe while searching The Pioneer Woman’s website (it was written by Erin Merhar) for blueberry recipes; this one looked delicious so I decided to give it a try since, well, I had all of the ingredients on hand.

I followed the recipe directions exactly, wrapping the spring form pan in foil, and then preparing the crust, baking it, and letting it cool completely.

While the crust cooked and cooled, I prepared the filling. The cream cheese was soft and I beat it with my stand mixer until it was creamy and then added the sour cream, sugar, flour, and salt. Once smooth, and after scraping down the sides of the mixer bowl, I added the eggs one at a time, without getting any egg shell into the batter. After again, scraping down the sides and bottom of the bowl with a spatula, I poured in the vanilla, lemon juice and the lemon zest and turned the mixer on one last time. I folded the sweet beautiful blueberries into the batter and then poured the filling into the springform pan. There was so much batter in the pan I was scared it was going to overflow while

baking and wondered if I should have used a larger springform pan.

Before I’d started the whole process, I’d found a roasting pan that was just big enough to hold the springform pan. I placed the foil wrapped, batter filled pan into the larger pan and then slid them into the oven. I’d forgotten to heat up some water so I quickly added water to my teakettle and in no time the water was hot and I poured it into the roasting pan that was in the oven.

I’d started baking the cheesecake early in the morning so that we would have it for our evening dessert. And after placing the cheesecake in the refrigerator I made the blueberry topping on the stovetop. The topping cooked for about 30 minutes before it thickened; maybe because the home-grown blueberries are so juicy. Once the topping cooled a bit, I placed it in the refrigerator.

After supper Brad looked at me and said “ready for dessert?” I cleared our dinner plates from the table and got the cheesecake and the blueberry topping out of the refrigerator.

Instead of pouring the topping all over the top of the cheesecake we decided to just pour some on our individual pieces.

Brad cut the first slice for himself and before I could get a piece of the cheesecake and sauce on my plate Brad was giving it a try and the first words out of his mouth were “this is really good.” After a few bites I had to agree. This cheesecake was delicious but I want you to know, we didn’t eat the entire thing by ourselves. We did share a couple of pieces and some sauce with my mom and brother; they both agreed that this recipe Nailed It. We also shared with our neighbor, Mr. Wells.

This cheesecake wasn’t as dense as the plain one I usually make, but I really did like it, especially with the blueberry topping; which would be good on other things too, like pancakes, waffles, biscuits, or ice cream – to name a few. And the water bath did the trick because the top of the cheesecake didn’t crack while baking.

This recipe is headed to my self-made cook book. I just might have to bake another one before blueberry season is over – but I’ve got to make sure we have company over when I do so we don’t eat the whole thing.

• For the crust: Preheat oven to 325 degrees. Wrap heavy-duty foil around the bottom and sides of a 9-inch springform pan. Spray the inside of the pan lightly with nonstick cooking spray.

In a medium bowl, stir together the graham cracker crumbs, butter, and sugar. Press into the bottom and 1 inch up the sides of the springform pan. Bake until golden brown, 10-12 minutes. Cool completely on a wire rack, about 30 minutes.

• For the filling: Beat the cream cheese on medium speed until no lumps remain in the bowl of an electric mixer fitted with a paddle attachment, about 2 minutes. Add the sour cream, sugar, flour, and salt. Beat until the batter is smooth and creamy, about 1 minute. Scrape down the sides and bottom of the bowl. Add the eggs one at a time and beat on low speed until just combined after each addition. Continue scraping down the sides and bottom of the bowl as needed. Stir in the vanilla, lemon juice, and zest.

• Fold in the blueberries.

• Bake for 1 hour 20 minutes to 1 hour 30 minutes or until the cheesecake is set on the sides and just barely jiggles in the center when the pan is shaken. Turn the oven off and crack the door. Leave the cheesecake in the oven for 15 minutes.

• Remove the cheesecake from the water bath and carefully remove the foil. Transfer to a wire rack.

• Let the cheesecake continue cooling to room temperature, about 2 hours. Place in the refrigerator for at least 8 hours to chill completely.

• For the topping: Combine the blueberries, sugar, lemon juice, and salt in a medium size saucepan over medium heat. Cook, stirring often, until some of the blueberries start to break down and the sauce is thickened, 12 to 15 minutes. Remove from the heat. Cool to room temperature, about 1 hour. Cover and refrigerate until using.

• To serve: Run a thin knife along the edge of the pan before removing the sides from the pan. Top the cheesecake with the blueberry mixture just before serving.