CDC says 61 Kentucky counties are at high risk of Covid-19 and 45 are at medium risk; Beshear says ‘be wary’ of coronavirus 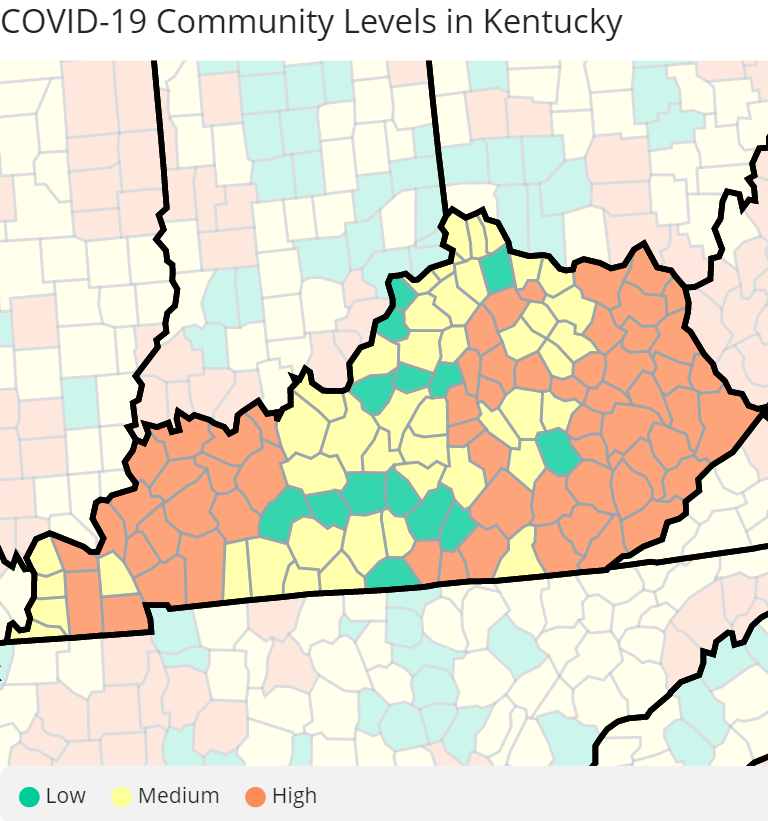 By Melissa Patrick
All but 14 of Kentucky’s 120 counties have an elevated risk of coronavirus on the latest federal risk map, and Gov. Andy Beshear cautioned that the transmission rates are likely high in those counties too.
“We know there is a lot more Covid that is out there, and people need to really think about what steps they want to take, or the repercussions of steps that they might not take,” Beshear said at his weekly news conference. And while the latest dominant variant isn’t nearly as deadly as recent ones, “It still is harming and taking lives,” he said, “and we need to be wary of that.”
This week’s Centers for Disease Control and Prevention risk map says Kentucky has 61 orange counties, indicating a high level of risk. That’s a big increase from the 37 on last week’s map. Most of this week’s orange counties are in the east and west, with a string of them down the middle of the state.
Forty-five counties are yellow, indicating a medium level of risk. Last week 44 were yellow. The rankings are based on new coronavirus cases, hospital admissions and hospital capacity.
In orange counties, state guidelines call for wearing masks in indoor public spaces, limiting in-person gatherings, limiting the size of gatherings, and social distancing.

People in yellow counties who are immunocompromised, or at high risk for severe illness from the virus, should talk to a health-care provider about whether they need to wear a mask or take other precautions, the CDC says.

The CDC also issues a transmission map, which shows that all but four counties have a high level of coronavirus transmission, shown in red. State officials say the risk map, on which the highest value is represented by orange, is the map that people should use to guide their preventive measures against Covid-19.

The state’s weekly pandemic report, released Monday, showed Kentucky had an average of 1,564 new cases a day last week, 14.3 percent more than the week before. The positive-test rate increased to 16.96% and Covid-19 deaths jumped to 62 from 38 the prior week.

Hospitalizations, while still low, are on what Beshear called a “legitimate increase,” increasing enough to prompt him to urge caution for the first time in a long while.
“People need to be wary,” the governor said. “And certainly, if people are in the groups that this virus harms the most, they should definitely think about taking extra steps.”
Nine out of 10 Kentuckians under 60 who have died from Covid-19 in the past year were unvaccinated, and two-thirds of Kentuckians over 60 who died from Covid-19 in the past year were unvaccinated, Health Commissioner Steven Stack said.
“The risk reduction from death and severe illness and hospitalization is profound,” he said.
Speaking to how contagious the Omicron BA.5 variant is, Stack said earlier variants resulted in one person possibly infecting three or more people, while one person with BA.5 could infect 18 or more people. The good news is that even as BA.5 causes more infections, it does not appear to cause increased hospitalizations or deaths.
Stack said we are “solidly at a phase in the pandemic” where individuals who are at higher risk from the virus — such as people 50 and older and “certainly over 60,” anyone with major medical problems or compromised immune systems — need to take extra precautions, which involves getting that second booster.  “If you’re generally healthy,” he said. “I think you might be OK to see what happens in the fall,” when the FDA is expected to approve a new version of the vaccine with broader protection.
“We have all got to take this seriously,” Stack said. “That doesn’t mean we don’t go on with life, but this is this is here to stay, folks. So I think we all still should continue to treat it with a healthy dose of respect.”
Stack praised Toyota Motor Manufacturing’s decision to require masks in its Georgetown factory, noting that while this variant isn’t as dangerous as prior ones, it is highly contagious and causing people to get sick and stay home from work, potentially impacting a whole operation.
“I think this is important . . . and encourage other employers to consider what’s appropriate in your setting,” Stack said.
New vaccine approved: The U.S. Food and Drug Administration approved emergency use of a new Covid-19 vaccine called Novavax on Wednesday. The vaccine that is made with more traditional technologies than the Pfizer and Moderna mRNA vaccines.

“In the next few weeks or month, you’ll have another option if for some reason the two mRNA vaccines were not appealing to you . . . and I would encourage you to be open to it,” Stack said.

Vaccines and tests could run short: White House Coronavirus Response Coordinator Ashish Jha told theBipartisan Policy Center July 12 that the nation won’t have enough Covid-19 vaccines and tests for this fall and winter, since Congress is refusing to fund such efforts, Michelle M. Stein reports forInside Health Policy.
This news comes as the administration works on strategies to be ready for the pandemic’s next phase, including having stockpiles of tests, personal protective equipment and updated vaccines, Stein reports.
“That job has become much, much harder . . . because Congress has decided that they don’t want to fund that kind of effort,” Jha said. “And so we are now trying to put together resources to make sure that we have at least some of the new vaccines, that we have at least some tests going into the fall. We are not going to have enough.”
Stack said this lack of federal funding is already limiting access to monoclonal antibodies for Covid-19, a treatment that acts much like your own antibodies and can stop symptoms of the disease from getting worse and may prevent hospitalization caused by worsening symptoms.
“I’ll make it very concrete,” Stack said. “We’re gonna run out of monoclonal antibodies here in the next few weeks, and the monoclonal sites are going to shut. There won’t be any more monoclonal antibodies in Kentucky or any state in the next few weeks because the federal government has no more money to purchase them.”

Hopefully, he said, this won’t happen with Covid-19 vaccines, but “If Congress doesn’t grant more money to the administration, the administration has said unequivocally, they will unfortunately not have the resources and then that means we won’t be able to just tell every citizen in every Kentucky and you can just go and at no cost to yourself get a vaccine.”

That would mean your insurance would have to pay for it, or you would pay for it out of your pocket, he said. Further, pharmaceutical companies may not innovate as quickly without government support.

“So I hope they’ll take action,” he said. But for right now, “Vaccine is abundant. So if you are eligible, please go out and get it.”