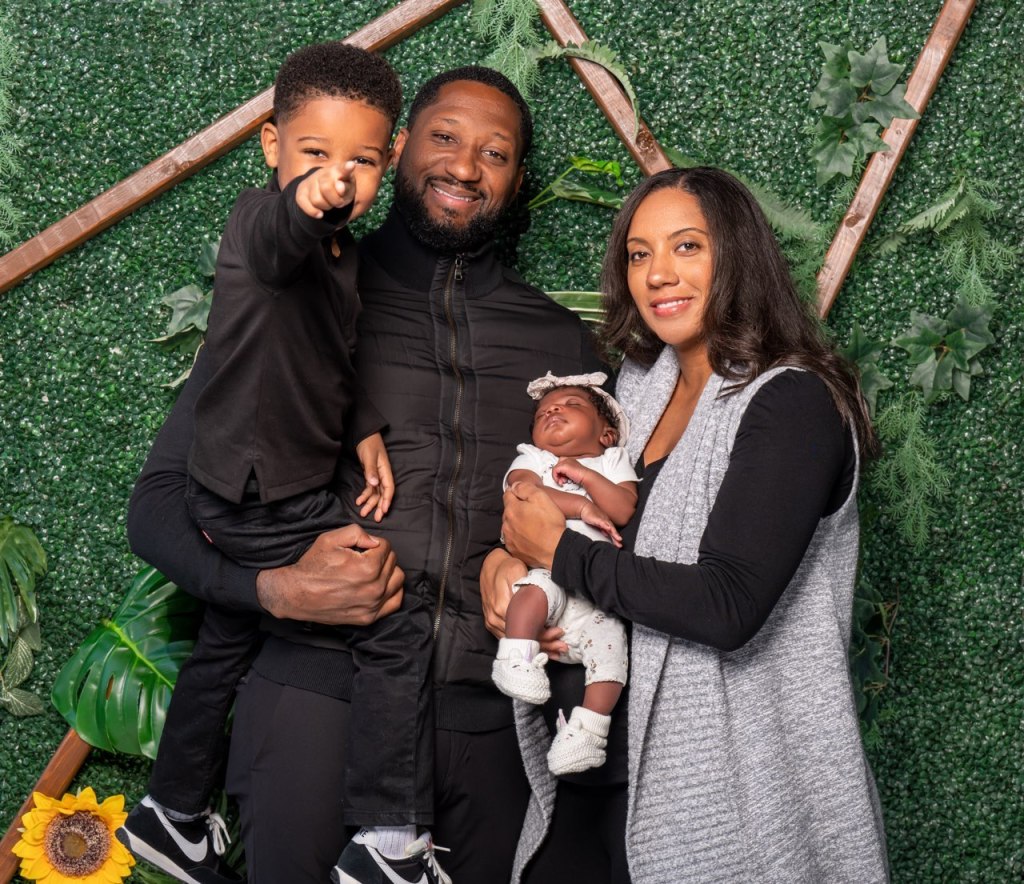 Keenan Burton and his family are all smiles over him becoming the fourth player off the 2006-2007 Music Bowl teams to be inducted into the UK Athletics Hall of Fame. - Submitted photo.

Keenan Burton really can’t rank where being selected for the University of Kentucky Athletics Hall of Fame falls on his list of accomplishments.

“It is right up there with everything. Selfishly, I have been waiting for this call for a long time. In life everything should be earned. I feel like I did that. I did everything I was supposed to do and to be in position for this to happen makes me feel really good.” said Burton.

He certainly had Hall of Fame numbers for the Kentucky football team when he finished his career in 2007. He ranked fourth in school history in pass receptions (189) and second  in both receiving yardage (2,376) and touchdown catches (25). He also set a UK career record for kickoff return average — 25.6 yards per attempt. Burton put those numbers up despite a wrist injury in 2004 and foot injury in 2005

Burton admits he wondered if another member from the same team would make the Hall of Fame.

“I will be honest about that. For a long time I tried to figure out what the criteria was. I am not taking anything away from teammates. They were all amazing. There are some not in who may deserve it, too,” Burton said.

“I didn’t think I would get in in my 40’s because so many great guys came after us. My numbers were stellar but my NFL numbers are not like some. But I always felt my job was to do things the right way, set an example for others and be loyal to those I love. That is what I did.”

Like Tamme, Woodson and Woodyard, Burton was not a highly acclaimed recruit. They were not four-star or five-star recruits. Burton jokes they might not have been three-star recruits.

“We call came here to do a job and win. We did as well as anybody,” Burton said. “With a little more depth, we could have competed for a SEC title and maybe even a national title. But we did  our best.”

Burton was a Louisville high school standout but even the hometown Cardinals did not recruit him. He had no offers at the end of his high school junior season.

“Kentucky finally came in but wanted me to play safety. If not for that, I would not have been at Kentucky at all,” Burton said. “(Head coach) Guy (Morriss) recruited me as a safety. I asked him if he could at least give me an opportunity at receiver and if it did not work out I told him I would be the best safety he recruited.”

The St. Louis Rams picked Burton in the fourth round of the 2008 NFL Draft and he signed a three-year, $1.5 million deal that included a $300,000 signing bonus. He had 13 catches for 172 yards and one score as a rookie and had a team-high 25 catches for 253 yards in the first nine games of 2009 before suffering a career-ending knee injury.

“I planned to play 10 years in the league. I did not get drafted into a good situation but I was getting better. When my career got cut short by the injury, I had no idea what to do,” Burton said. “I was not taught financial literacy or how to invest money in college. I had to figure that out with my own resources. I studied and met some good people who helped me.”

He now works in commercial real estate in Louisville with a focus on multi-family dwellings. His son is 5 years old and his daughter is 9 months old.

“I chase them around every day and love it,” he said.

He also still loves Kentucky football and is proud of the part his team played in reshaping the history of Kentucky football. Rich Brooks followed Morriss and was on the verge of perhaps being fired in 2006 when UK caught fire to earn the Music City Bowl trip.

“I can never put into words what guys like Tim (Couch) and Jared (Lorenzen) did for the program. But we were in a position where not a lot of people believed in us or coach Brooks,” Burton said. “We exceeded expectations and made people want to look at Kentucky football.

“Randall Cobb, Stevie Johnson, Dicky Lyons … those guys came to Kentucky because we did. Then Bud Dupree comes because of Randall Cobb. I am proud we promoted the growth of the program and then they got (Mark) Stoops and he has built on the foundation we started. I love what he’s done and is going to continue to do and I am loving every minute of it.”