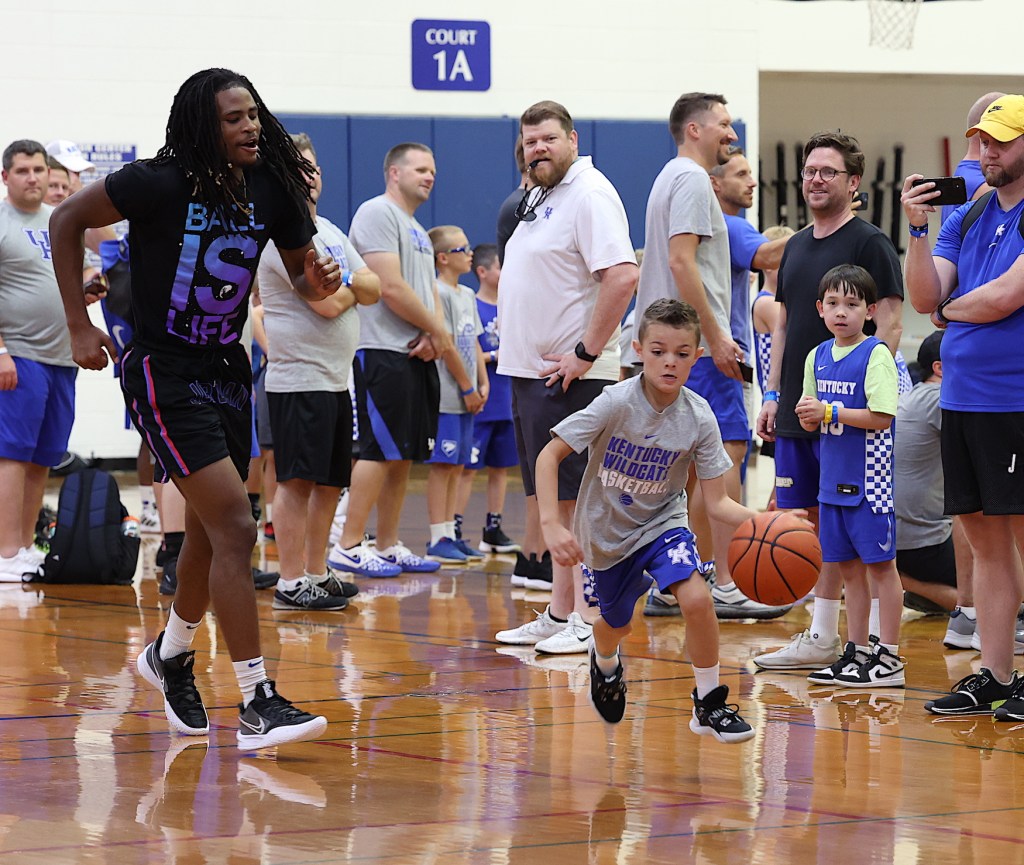 Every new Kentucky basketball player believes he understands the attention he’ll face with the Wildcats. Few actually do until they experience it and sometimes it is more than some players can handle.

Freshman guard Cason Wallace got his first real taste of what Big Blue madness is like during last week’s Kroger Tour when he came to London with coach John Calipari. He got to see fans lined up for over two hours to get coach John Calipari’s autograph and just see and take photos with him, teammates Chris Livingston and Brennan Canada, and assistant coaches Orlando Antigua and KT Turner.

“It is very cool seeing how many people actually support Kentucky basketball and how much they love it,” said Wallace. “It surprises me some. Even though we have not got on the court and played in front of everybody, just seeing how much love they have for us is crazy.”

Krysten Peek, a basketball analyst/writer for Rivals and Yahoo, believes Wallace is one of the toughest minded prep players she’s seen, a compliment Wallace embraces.

“I know it is going to be a challenge playing here but if I was weak-minded, I wouldn’t be here. I have to keep it strong mentally and know I can do anything and not let any pressure bother me,” he said.

Wallace has an engaging personality. He  might not be quite as outgoing as former UK guards Tyrese Maxey and Immanuel Quickley, but he interacted well with fans of all ages in London. He also had fun working with youngsters at a one-day basketball camp in Frankfort.

“I like enjoying people’s presence. I see the smile I put on their face, so just knowing they put a smile back on my face makes them feel good hopefully,” Wallace said in London. “I got some real genuine laughs and smiles from the fans and hopefully I can keep making them smile.

“I can’t wait to play in front of the fans. A lot of Kentucky fans started showing me love back in high school and some even came to watch me play. So I want to make them happy with the way I play for them.”

He understands nothing makes UK fans — or Calipari — happier than watching the Cats win, especially in postseason play.

“We are going to have a good season. Players are working out consistently on their own and with the team. Once we all get together and put it together, I think we can go pretty far this year,” Wallace said. “The goal is to take care of business and win a championship. I like to have fun but once it is time to lock in and be serious, I can do that with no problem.”

His biggest adjustment on the court has been communicating clearly with opponents while off the court it has been nutrition and hydration.

“You do so many workouts that it is easy to cramp up,” Wallace said. “I have had to learn to eat better and also make sure that I get enough sleep. I put in a lot of work outside of basketball doing strength and conditioning. I have lifted more weights here than I ever have before but if that’s what it takes to win a championship.”

Calipari has compared him to former UK players Shai Gilgeous-Alexander and Eric Bledsoe. Wallace compares himself to current Miami Heat standout Jimmy Butler because of his commitment to defense.

“Shai, I like his game and I try to model it a little bit as far as floaters and getting shots. Eric, he’s a big guard. I like the way he plays. I feel like I could be a little bit of him too,” Wallace said.