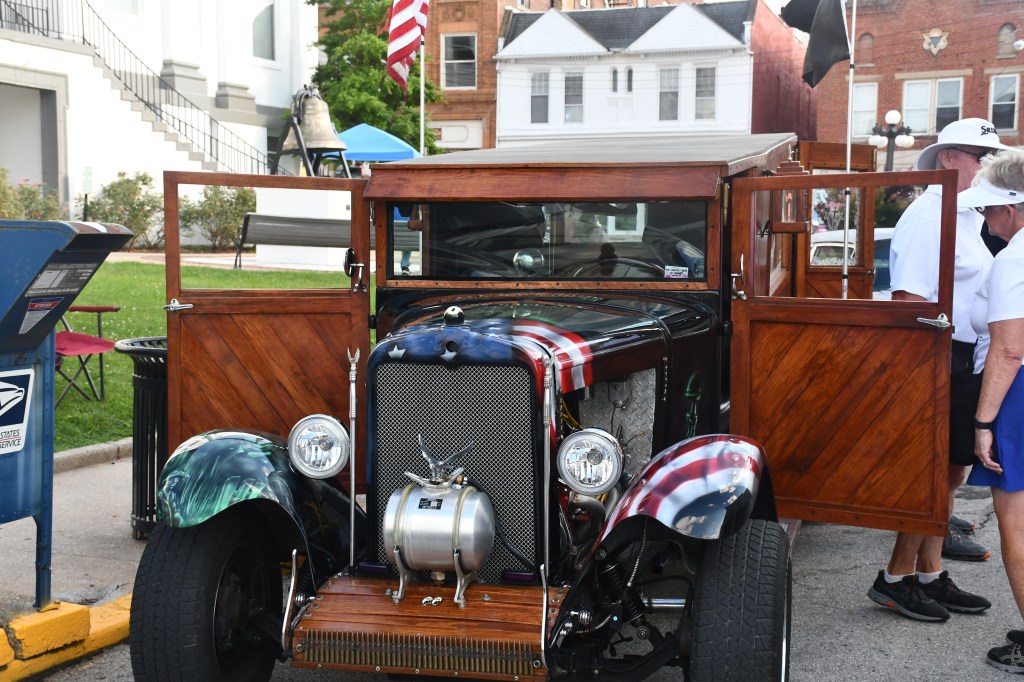 Donald Glover's 1920s wooden hearse is driving - most of the time - memorial to deceased members of the armed forces. - Photo by Warren Taylor

Sweet treats and even sweeter rides brought joy to the area surrounding the Clark County Courthouse and at the Many Friends Parklet last Thursday evening.

Vintage car owners like Braxton Jones had their rides displayed for any wandering eyes to admire.

Jones’ addition to the lovely automotive views around the square was a 1957 Chevrolet 210 sedan that has been in his family for around 15 years.

“I think the sentimental value for this one personally, but everyone has their own thing with cars,” Jones said about what drew his attention to classic cars. Jones admitted that he enjoys the attention that his classic Chevrolet demands. “I like driving around town, and everybody waves at you and gives you a thumbs up. I really enjoy talking to people and showing them my car,” he said.

“One thing I do – I’m not trying to put anyone down – that I do differently from anybody else is that if someone looks up, a little kid, I’ll let them get in my car and take pictures,” Jones said.

An unconventional classic parked on the square was a 1920s wooden hearse owned by Donald Holder.

“I was internet surfing,” Holder said on how he came to own his unorthodox classic. “My fat fingers hit a button and sent an automated message to a guy about buying a vehicle.”

After some soul searching on whether he could afford the hearse or not, Holder gave in to his desires. The hearse needed work when he purchased it.

“When I got it, it was nothing but wood and black tar paint,” Holder said.

With some tender love and care, Holder and his wife have turned the vehicle into something special – a rolling memorial for those who perished while serving in the U.S. military.

The faces of 12 relatives of the Glovers’ that served are airbrushed on the hearse in tribute.

Holder said that he initially wanted the hearse “to be something different” but now has a loftier goal in mind.

“I want to do a memorial run from the Lexington airport when a [deceased] soldier comes home. I want to do the honor guard – with Rolling Thunder and The Patriot Guard – and run with the coffin,” he said.