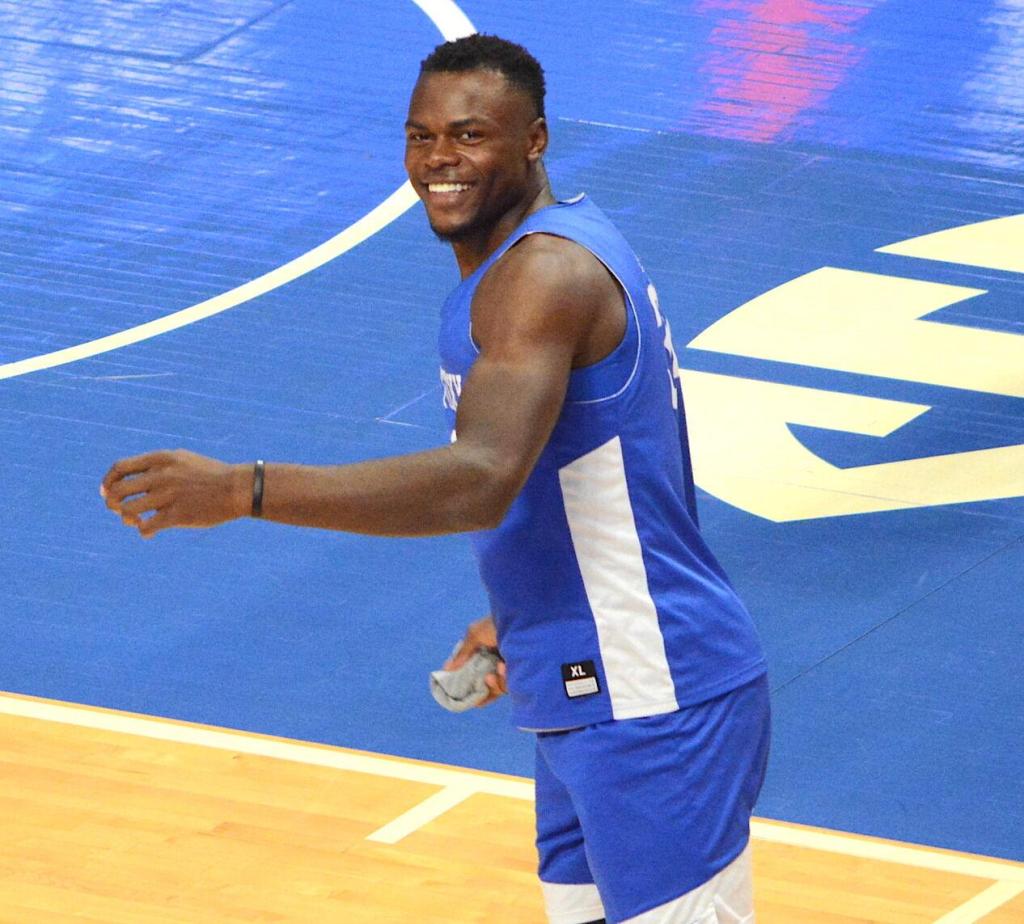 Oscar Tshiebwe prepares to throw a T-shirt to the crowd during an open practice Tuesday night at Rupp Arena. - Photo by Keith Taylor/Kentucky Today.

Kentucky will be taking one of its intra-squad scrimmage games on the road this season to somewhere in eastern Kentucky.

The Wildcats will play their annual Blue-White game at a site to be announced at a later date it was announced during the Kentucky Flood Relief Telethon Tuesday night at Rupp Arena. The Kentucky basketball team had an open practice to raise funds for victims of last week’s deadly flooding that has claimed 37 lives so far.

The event raised more than $2.4 million through the American Red Cross that will be used to help assist in cleanup and recovery efforts in southeastern Kentucky.

“This (idea) was from the minds of this group,” Kentucky coach John Calipari said. “We planned this in 48 hours.”

And there was another big announcement.

Gonzaga coach Mark Few addressed the team and attendees on the video board and expressed his appreciation for the efforts to help provide support to the flood victims.

“What you’re doing right now is God’s work,” Few said. “That’s coming from the son of a preacher. This is what it should be all about — giving back and making a difference. … It’s so cool that you guys are doing this.”

During his appearance, Few and Calipari announced a home-and-home series between the two powerhouses. The Cats will play the Zags on Nov. 20 in Spokane, Washington, and Gonzaga will return the favor in 2023 by making a first trip to Lexington for a game in Rupp Arena.

This year’s game will make for a big weekend with the Georgia-Kentucky football game on Nov. 19 and the UK-Gonzaga first-ever basketball meeting the following day in Washington.

The Wildcats, led by reigning college basketball Player of the Year Oscar Tshiebwe, practiced for an hour and a half and answered questions from fans in the stands. Each player took part in the practice session with the exception of Lance Ware.

Former Kentucky player Jack Givens, color commentator on the UK Network, praised the Wildcats desire to reach out and lend a helping hand in times of need.

“It’s amazing these players came up with this idea,” he said.

Cassidy Rowe, a freshman on the women’s basketball team, is a graduate of Shelby Valley High School in Virgie, one of the areas impacted by the heavy flooding. Rowe visited the region last weekend and was shocked by the devastation.

“It was heartbreaking to see people I love hurting,” Rowe said. “You just don’t know (how much they are hurting) until you see it first hand.”

The women’s basketball team will have a camp from 9 a.m. to noon Saturday at North Laurel High School in London, with all proceeds going to the flood relief efforts in eastern Kentucky.

Calipari urged fans and others to keep eastern Kentuckians in their hearts.

“Please pray for for those affected by those floods,” he said.