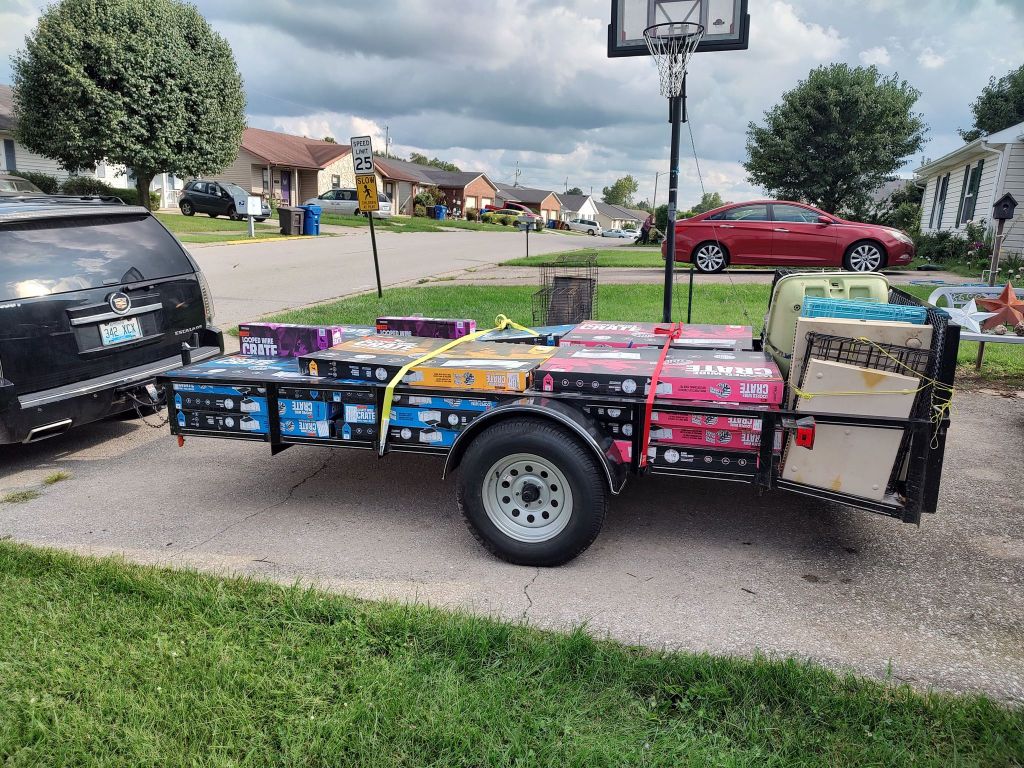 Brooke Rannells and several other members of the Romey the Town Dog Facebook group collected donations for the Kentucky RIver Regional Animal Shelter in southeastern Kentucky.

The latest death toll from the flooding in southeastern Kentucky stood at 37 as of Thursday, and the total property damage remains uncounted. Still, there is a silver lining to the tragedy: people’s desire to help those in need.

Rescue crews and volunteers from Clark County joined the legions of people pouring into the Appalachian foothills to do humanitarian work.

Winchester resident and Clark County Public Schools Teacher for the Hearing Impaired Brooke Rannells was one of them and shared her experiences from last weekend during a series of phone interviews with the Sun.

Rannells is a member of the Romey the Town Dog Facebook group and was part of the initial discussion to take up donations for the four-legged residents of southeastern Kentucky.

“We decided that we would stick to what we know within our group, and animals is what we do,” said Rannells.

After discussing logistics with group founders Maria Cupp and Heather Rose on Thursday and Friday, the Romey group members – including Rannells – decided to help collect donations from local businesses and transport them to flood-stricken areas.

After a digital call to action, the community came through with donations.

“Our animal-loving friends never let us down,” Rannells said.

“Majority of the money that we raise and are continuing to raise, we are going to go in and make a large purchase on kennels and crates,” Rannells said last week.

Rannells explained that many people rescued from the floodwaters brought their animals with them and that many shelters were allowing pets and their owners to stay together – hence the need for the crates and kennels.

The donations were delivered to representatives from the Kentucky River Regional Animal Shelter – located in Perry County but it also services Breathitt, Knott, and Letcher counties.

Getting to needed locations was difficult during the first of the multiple trips that Rannells made over the weekend.

“The first night we went, we had to go around Prestonsburg and back in,” Rannels said.

Thankfully, future trips were easier thanks to the reopening of Kentucky Route 15 – which runs from Winchester to Whitesburg. Rannells spent most of her time volunteering along the far eastern highway corridor in Perry County.

For many volunteers, getting into the most isolated parts of the flood zone, was impossible, so their first-hand perspective on the damage was limited. Even so, it was easy for Rannells and others to spot where the floodwaters were.

“You can see the waterlines up above,” Rannells said about the experience of driving down previously submerged portions of the highway. “When you look down over the embankments, you realize that there are houses over there that were covered in water.”

Debris swept away by the rapid water ended up stuck in trees. Rannells likened the sight to something one would expect to see after a tornado.

“Sometimes you could see areas that are flat but can tell that something is gone like a trailer,” she said. “It’s heartbreaking to describe it. You don’t understand the force of nature until you witness something like this”

Rannells noted that the devastation eventually gives way to a more awe-inspiring sight as one drives through the area.

“You start noticing all the people whether you are passing people driving down the road or see their vans parked … You see different aid organizations like FEMA and Red Cross, but you also see little mom and pop food trucks. If you look closer, you just see a bunch of people trying to help. It reminds me of what Mr. Rogers said, ‘Look for the helpers.’ Everywhere there is a catastrophe, you will see the helpers … And no one is going to be able to fix this for these people, but there are a lot of people trying to pull them through.”