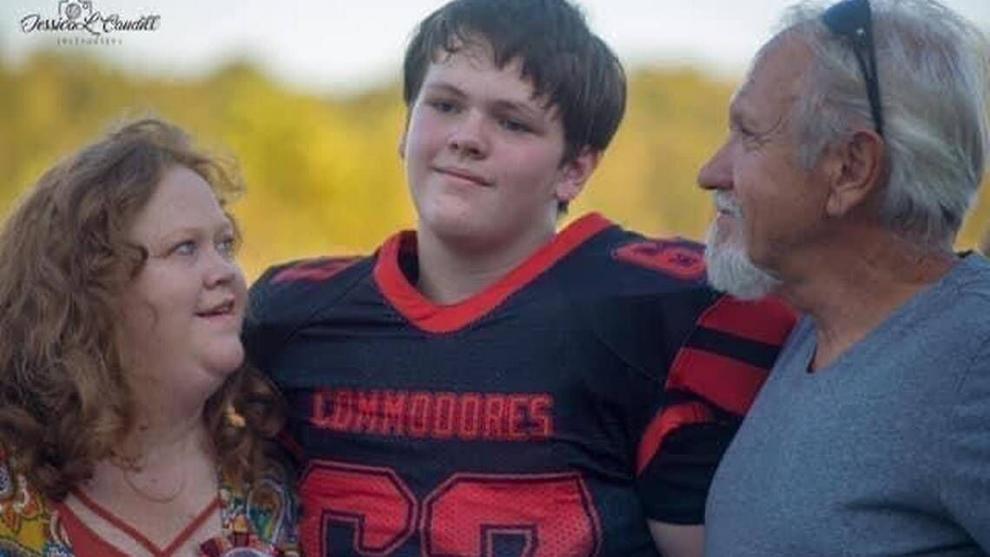 aron "Mick" Crawford is flanked by parents Ronda and David Crawford. Mick Crawford died Friday after becoming ill while helping with a flood cleanup in Perry County. He is being remembered in the community for his giving heart and love of Jesus. (Family photo courtesy of Kentucky Today)

A Knott Central High School football player is being remembered for his kindness to others and love for Jesus after a tragic turn.

Aaron “Mick” Crawford was helping victims of the southeastern Kentucky flooding for three days last week when he became ill. He passed away Friday at UK Hospital, four days after becoming sick, according to his mother, Ronda Crawford.

His mother said he went into cardiac arrest. Ronda and David Crawford, his father, decided to donate his organs because, “It’s what he would want. “

Mick Crawford was a soul-winner who would pray for anyone he met and ask them if they knew Jesus, his mother said on Facebook. “If Mick could give us his final wish it would be that everyone come to know Jesus because that’s the most important thing in this world to him.”

Mick Crawford turned 18 last month and would have been a junior at Knott Central, where he also was part of the wrestling team. He was the youngest in a family of eight siblings. The family attended Blair Memorial Baptist Church where Joe Engle, the Perry County sheriff, serves as the pastor.

“He loved superheroes and he was a real-life superhero,” Engle told WYMT.

Mick Crawford’s body is being brought back Monday from Lexington where he was in the hospital. He was accompanied into Perry County Monday morning by a police escort.

Thirty-seven have been confirmed dead from the floods, according to state officials. Two women from Breathitt County are reported missing.