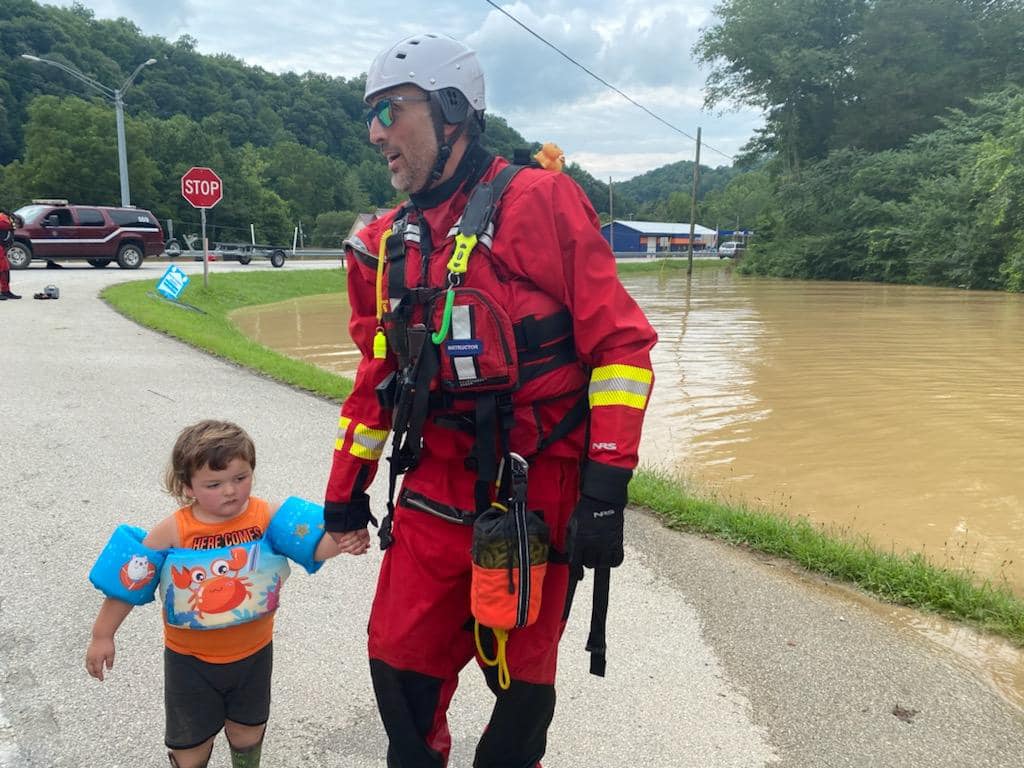 Search and rescue teams providing efforts to help citizens of southeastern Kentucky came to the region from all over the state after devastating flooding last week.

The Wolfe County Search and Rescue Team (SART) – which has several members from Winchester – was recently active in the region despite the risks involved.

“As far as swift water rescue operations, this is by far the worst flooding that I have ever experienced,” said Drew Stevens, a Winchester native who serves as the team’s rescue technician and public information officer. “It is complete and utter devastation. Flash flooding is not uncommon in eastern Kentucky. However, this particular event is a thousand-year flood.”

According to estimates, in some locations,  as much as one foot of rain fell during an hour.

However, swift water rescue is also something they’ve undertaken.

In the beginning, the Wolfe County SART responded primarily as a swift water rescue team after an aid request came in from Breathitt County Thursday morning at approximately 5:00 a.m. Though it was initially believed that only a few homes were overwhelmed with water, it quickly became clear that the problem would worsen.

“Our team responded with our Zodiac rigid inflatable boats and some swift water rescue technicians and began rescue efforts in that community,” Stevens said. “That would be anything from rescuing people that were trapped in their roofs or in their attics to coordinating with our partners with the Kentucky Army National Guard to conduct hoist operations for subjects that were trapped.”

John May, Chief of Wolfe County Search and Rescue, led the hoist operation.

After the initially planned course of action proved to be unreasonable, May and his team were able to rescue others amidst standing, chest-deep water.

“We were originally going to cut people out of the roof … When we got there, unfortunately, the roof was tin so that we couldn’t cut through it with a chainsaw”, said May. “Me and my teammate went to the lower end of the house and knocked out a fairly tall window and got all the glass out of it. .. What we ended up doing was pulling them through the window one at a time and then driving the boats back up the house.”

Once individuals found footing at the top of the roofing area, they were hoisted into a Blackhawk helicopter to be evacuated from the site.

Miles of land, not including the river area, were covered in water and led to encounters various obstructions and environmental factors that became a distraction.

“Mechanical in nature, some equipment, bins and power lines in the water … Everything was debris because it wasn’t a waterway.”, said Winchester resident and team member Tommy Adams. “It was a street that had become a waterway. It was all about dodging. Luckily, our Chief John [May] is very skilled, and we were able to get through and help folks.”

In total, it’s estimated that over 100 individuals were saved by the efforts of the Wolfe County SART.

As of Thursday afternoon, many team members and local volunteers were still working in the area, performing clean-up and other duties.