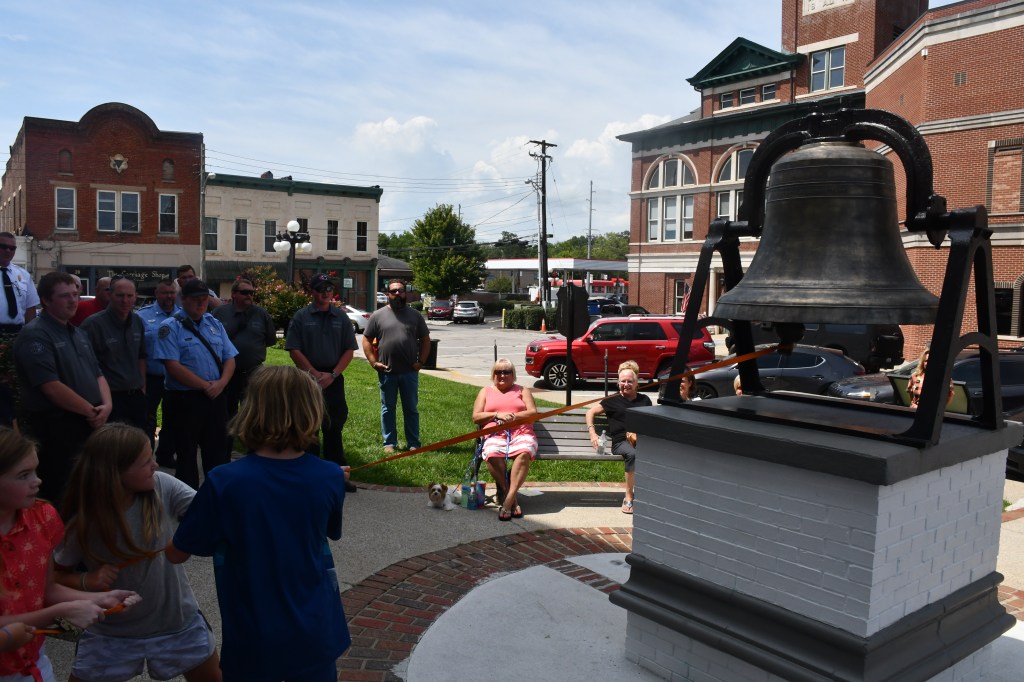 The end of a long project is typically met with enthusiasm, but seldom does that project connect the present to 115 years prior.

On Thursday afternoon, a ceremony in the back of the Clark County Courthouse displayed the original bell found in the steeple during its construction in 1907.

“This kind of wraps up everything we’ve done for the courthouse when we started the steeple project,” said Clark County Fiscal Court Magistrate Robert Blanton. “We thought this was best [and] where the public could enjoy it. It kind of gives a centerpiece to the rear of the courthouse.”

In 2017 the most recent steeple was removed and replaced with a new one, and it required the removal of the bell that had been in place since 1907.

Though taking considerably longer, modern equipment wasn’t available to workers of that era. The bell and the clock that came with the construction in 1907 were installed by C.H. Bowen, a local merchant, and jeweler.

In place for over 100 years, the bell – which was mentioned to weigh 1,500 pounds at the time of its installment – had been seen by only a few.

“It’s the first time most people have seen this bell, even for the 115 years it was up there because they might have seen it going up, but no one ever got up there except the timekeeper”, said local historian Jerry Cecil.

There were some exciting finds when the bell was removed in 2017.

Not only had the Buckeye Bell Foundry that manufactured the bell installed its company name on it, but a variety of other business names and more adorned the component – presumably, the initials of individuals who helped with the project.

Kevin Wilson, the former road supervisor for Clark County, was a member of the crew who helped remove the bell and temporarily placed it in storage.

“It was a feat getting it loaded up because it had all the wood and stuff,” said Wilson. “I got to looking at it and thought, ‘There’s something on there, and took a piece of chalk and went over the letters.”

To officially mark its dedication, the bell was rung with the assistance of four local children attending the event.

As time continues, it’s the hope of those involved in this project that the bell links the past of Winchester to the present.

“We all think, ‘this is the way the world should be?’, but what was it like before we got here?” Cecil said. “Our appreciation of history is to save this one symbol.”