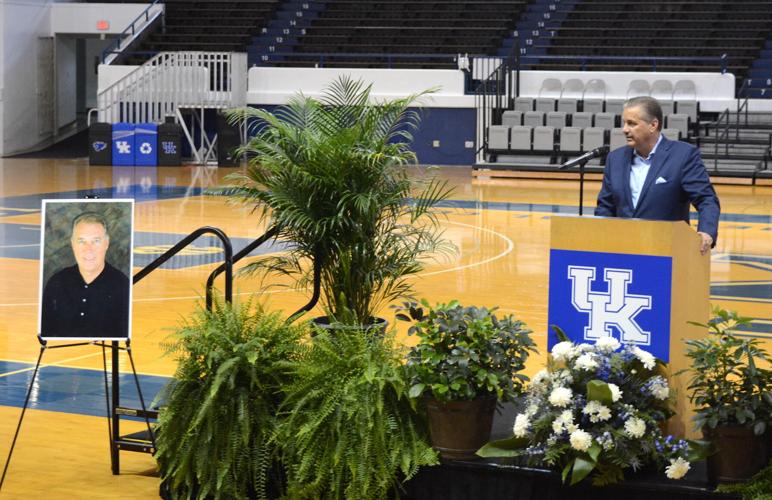 Mike Pratt was instrumental in getting John Calipari - seen speaking - to Kentucky in the spring of 2009. (Photo by Keith Taylor)

Dan Issel and Mlke Pratt weren’t the best of friends when they arrived on campus in 1966. By the time they both graduated, they were almost inseparable.

Pratt died following a long battle with cancer on June 16 at the age of 73. Issel was one of the keynote speakers who paid tribute to the late Kentucky Hall of Famer during a Celebration of Life for Pratt on Friday at Memorial Coliseum. Issel recalled Pratt as friend for life.

“He truly lived his life by the Golden Rule,” Issel said. “He treated everybody the way that he wanted to be treated. He always had time for everybody.”
Issel was joined by former teammate Jimmy Dan Connor and Kentucky coach John Calipari. Pratt’s brother, Pat Pratt, and step-daughter Christina Stone also spoke, while Tom Leach served as master of ceremonies.

“Mike loved the University of Kentucky from the moment he stepped on this campus in 1966,” Calipari said. “He spent a lifetime giving himself for the betterment of this program and inspiring others who love this game and this program to succeed. He bled blue through and through.”

Known as an humble person, Pratt also was praised for his basketball skills by Issel.

Pratt was on a search committee that brought Calipari to Kentucky from Memphis in 2009 and the Kentucky coach hasn’t forgotten the impact Pratt made on his coaching career.

“There’s not a day that goes by that I don’t thank God for Mike’s confidence in me to take over a program that was such an important part of his life,” Calipari said.

The two forged a friendship that carried on from the day Calipari was hired as Kentucky’s coach on April Fool’s Day more than 13 years ago.

“You felt better after you spent time with him, that was Mike,” Calipari said. “The first time I met Mike, he was family … I’m thankful we crossed paths.”

“Not one person has said a bad thing about Mike Pratt,” Calipari said. “Not one. That’s how special he was. That’s what I remember most about Mike. He played with class, coached with class, he worked with class and treated everyone he came into contact with class.”

Leach, Pratt’s partner on the UK Radio Network during the past two years, agreed with Calipari.

“(He was) a Kentucky Wildcat legend, and an even better human being,” Leach said. “We mourned his passing in June and today the color scheme is more blue and white, which Mike would have wanted. Mike was a (Ohio) Buckeye by birth, but a Kentuckian by choice.”