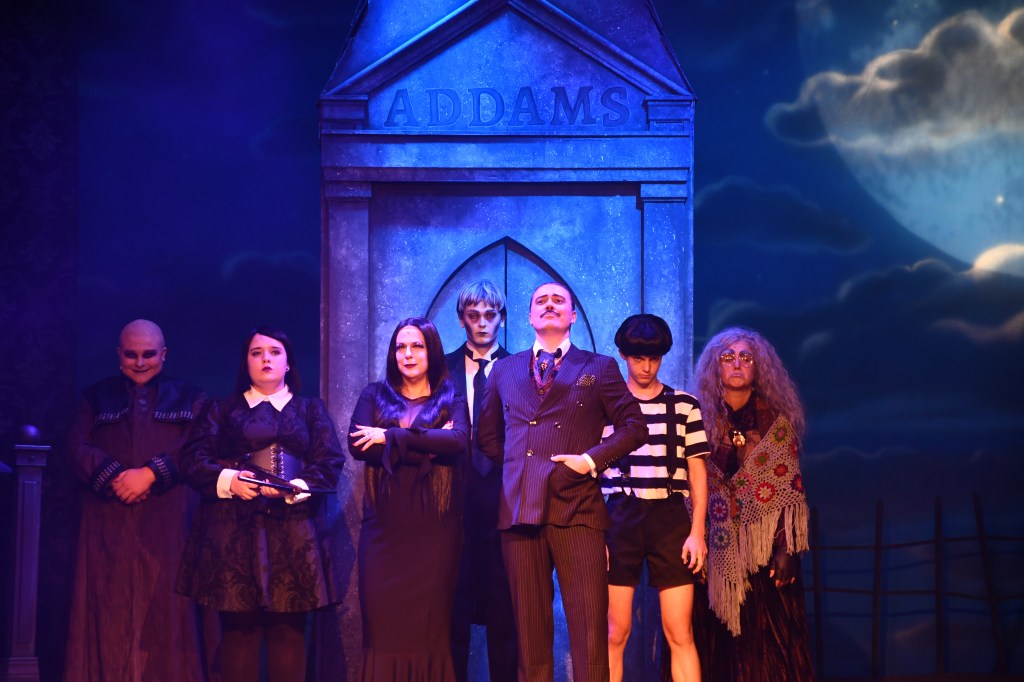 America's favorite creepy family, the Addams, will be on a Winchester stage starting Friday. (Photo by Warren Taylor)

America’s favorite creepy, kooky, and mysteriously spooky family – the Addams –  are taking up residence for the next three weekends at the Leeds Center for the Arts in downtown Winchester starting this Friday.

“The Addams Family” is a musical based on the beloved franchise that has spanned across comics, television, and film.

“What I usually tell people about this show is that I am not playing one of the Addams,” said Patrick Lee Lucas. “Wednesday, who is the Addams’ daughter, falls in love with Lucas Beineke, and I play his dad.”

Lucas explained the conundrum his character initially finds himself in.

“This is a crazy place that I don’t really understand,” he said about Mal’s thoughts. “I’m from Ohio and really don’t understand what this group of people is all about – their odd behavior and odd habits are nothing like what I am used too.”

Things are equally upsetting for the Addams clan even though they have a home crypt advantage for the get-acquainted dinner, especially for Pugsley, who fears losing his sister.

“Pugsley is upset that his sister is occupied with a boy and not with him,” said Winchester-resident Silas Coogle. “So he ends up getting into some mischief – he ends up poisoning somebody.”

In Coogle’s opinion, the close-knit nature of the family is the reason for that.

“I think the Addams family lives in a sort of isolated ecosystem, and Wednesday is his only entertainment. They are siblings and have been together their whole lives. So, when he learns that the one thing he relies on is being taken away, he gets really upset,” he said.

Rebecca Keith admires the togetherness of the title family.

“You have these very bizarre, ghoulish people, but they have a very loving, nurturing family unit,” said Keith.

Keith, a fan of the original TV series, said she found the Addams much more wholesome than the average sitcom family.

“When you look back at many of the contemporary television shows that were out around the same time, you have the nagging wife and the bumbling husband; they [the Addams] are the antithesis of the typical suburban family,” she said.

And despite the show’s eerie setting, the show is light-hearted, with a cast ready to knock the audience’s socks off.

“It is hilarious,” said Coogle. “We have a great cast. Everybody is super high energy. It is great dancing and singing. It is going to be a lot of fun to watch.”

Tickets are $22 for adults and $18 for students. They can be purchased online at www.leedscenter.org/event/the-addams-family.