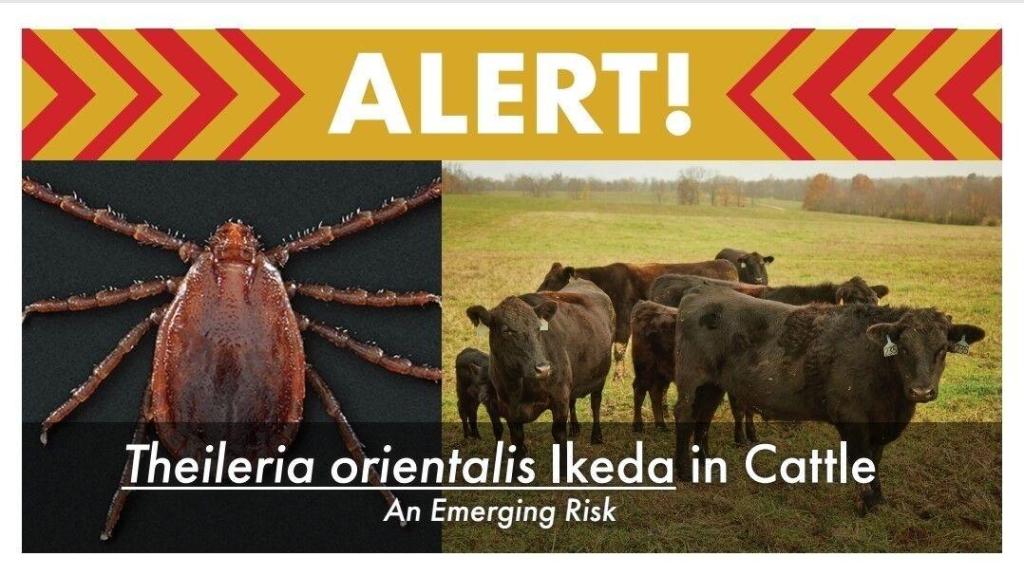 Theileria orientalis Ikedia, which is a protozoon known to be carried by the Asian Longhorned tick, or ALT, has been diagnosed in two beef herds, one in Fleming County and the second in Hart County.  In each instance, a beef breed bull fell ill and died.  There is no relationship between the two herds.

Theileria is a tickborne protozoa that infects red and white blood cells causing severe anemia in cattle as well as abortions, stillbirths, weakness, reluctance to walk, and death.  Physical examination may reveal pale mucus membranes, high fever and elevated heart and respiratory rates.  Theileria can be confused with Anaplasma marginale infections because both cause anemia. A blood test can distinguish the two diseases.

Once an animal is infected with Theileria, it becomes a carrier, which is a source of infection for other cattle in the herd.  There is no approved effective treatment or vaccine for the disease, making prevention and biosecurity imperative.

Though a threat to cattle, the disease is not a threat to human health.  Humans cannot become sick from contact with affected cattle, and consuming meat from affected cattle is safe, provided the meat has been cooked to an appropriate temperature.

The Asian Longhorned Tick has previously been detected in Boone, Metcalfe, Floyd, Martin, Madison, Breathitt, and Perry counties, and could be present and undetected elsewhere. The ALT has been found to attach to livestock, wildlife, dogs, cats, birds, and humans.  Cattle producers should consider tick control measures to lessen the likelihood of Theileria infections in their cattle herds.

Tick control measures include keeping pastures mowed and cattle restricted from wooded areas.  Regular inspection of cattle for ticks and use of acaricides, such as ear tags, pourons, or back rubs, are helpful.  A veterinarian should be notified in the instance of animals showing signs of lethargy or weakness.

The Office of the State Veterinarian has also created an alert flyer for cattle owners and coordinated no cost testing of blood for Theileria. Results are available to producers. Information gathered will be used to create maps that depict the spread of the ALT and Theileria across Kentucky. Farm and ownership information will remain confidential.