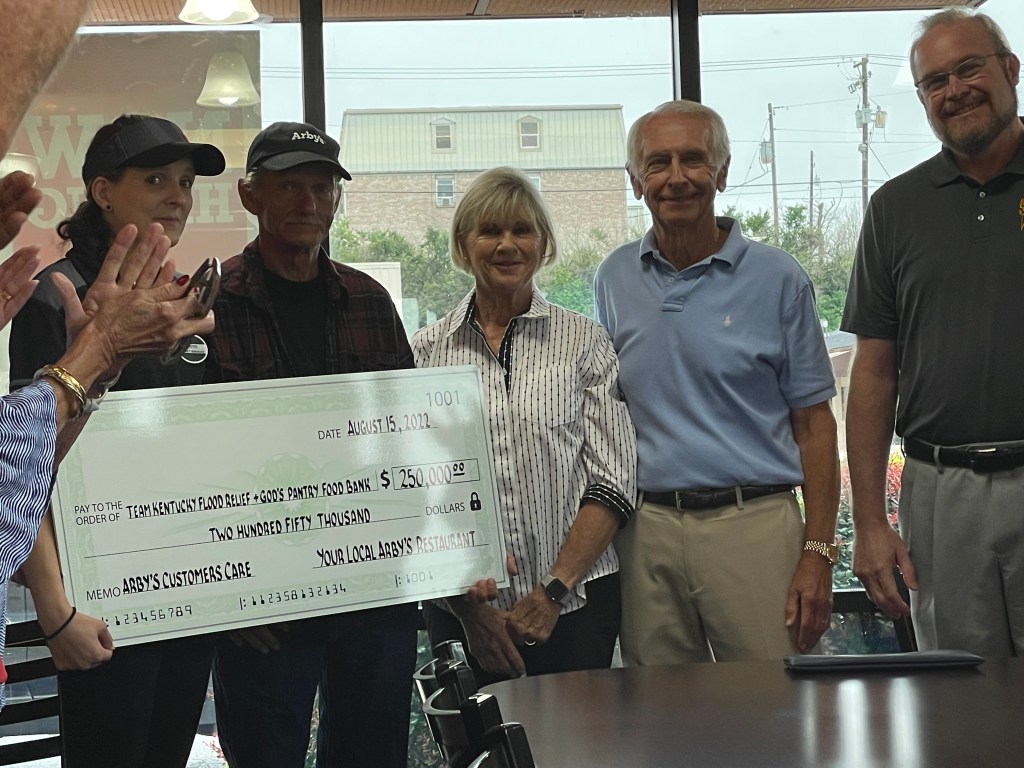 Former Governor Steve Beshear (second from the right) and wife Jane Beshear (in the center) presented a check at the Arby's on Bypass Road Monday afternoon. (Photo by Matt Cizek)

A small gathering room inside the Arby’s location off Bypass Road typically isn’t usually a place for big names and causes.

Yet Monday afternoon was an exception to that rule.

Along with his wife, former first lady of Kentucky Jane Beshear, former Gov. Steve Beshear was in Winchester to recognize Arby’s Restaurant locations from around the region and present a check of $250,000 to Team Kentucky Flood Relief and God’s Pantry Food Bank.

“Kentuckians are resilient,” said Beshear. “They care about each other … And I see that kind of spirit coming out.”

The $250,000 was based on how many total sales are being estimated, with any remaining amount, if they exceed expectations, also going towards relief efforts.

According to Chuck Coldiron, the president of Arby’s of Winchester, the first $75,000 will go toward Team Kentucky Flood Relief, while the other portion is split between the two organizations.

Coldiron was far from the only Arby’s representative present on Monday afternoon.

Joining him was the president of the Lexington Arby’s Advertising Cooperative Reza Tamachi, director of marketing for Arby’s Restaurant Group Anne Dodgion, and Lynn Taylor, director of operations for the largest franchise group in the Arby’s Lexington Cooperative.

“We’re here to make a difference as great or as little as it may be in the lives of eastern Kentuckians who have been so greatly impacted by such flooding,” said Dodgion, a Kentucky native. “It truly is a group effort, and I’m happy to represent the business.”

Rick Jackson of Hazard lost his vehicle and home during the flooding, while shift manager Kirsten Caudill Thompson’s father-in-law and grandfather-in-law perished.

“We often talk about Kentuckians being resilient, but just seeing it happen is a wonderful testament to the power of our ability to overcome tragedy, disaster, and to move forward in life,” Halligan said. “That’s the power of compassion. That’s the power of passion, and that’s the reason we’re all here today.”

Gov. Beshear noted that – despite political and other differences – disasters such as these could often bring people together.

“Once elections are over, we’re not Democrats of Republicans. We’re Kentuckians”, Beshear said. “If we can get more people in our state to get back to that, there’s no holding us back.”

And although some material items might not be salvageable, former First Lady Beshear noted that the charitable contributions and more made by the community and organizations involved would be remembered.

“The folks in eastern Kentucky don’t know who you are, but they do know what you’re doing,” she said.